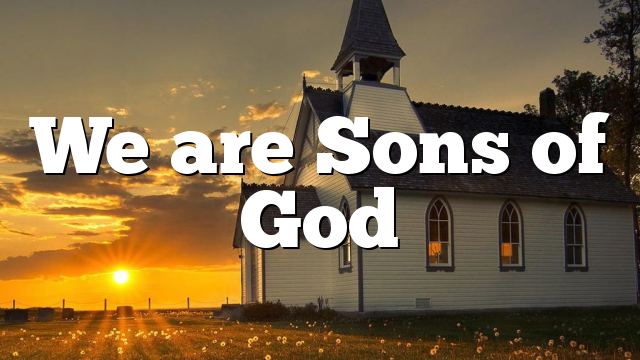 We are sons of God, the Bible reveals – Ray E Horton

Believers are more than slaves, servants, even friends of God. The Bible also calls us sons (and by implication, daughters) of God, who is our Father. “Yet to all who received Him, He gave the power to become sons of God, to those who believed in His name” (John 1:12).

The “appearance of the sons of God” won’t completely arrive until the Second Coming of the Lord, but creation rejoices to some degree every time a saint manifests His glory here on this earth

Note that as sons of God, His children, we are called to “be blameless and harmless, sons of God, without fault, in the midst of a crooked and perverse generation, in which you shine as lights in the world” (Phil. 2:15). Good thing for His grace, as we see in Vs. 13: “For God is the One working in you, both to will and to do His good pleasure.”

We are to shine as lights in the world

Yes, we are to “shine as lights in the world,” letting Jesus in us shine through. We are sons of God now, all by His grace, and all of creation is eagerly anticipating the end of the age, which will culminate in Jesus’ return and the manifestation of the sons of God when we will be complete. “The eager expectation of the creation waits for the appearance of the sons of God” (Rom. 8:19).

In his commentary on Rom. 8:19, Andrew Wommack writes that “this verse makes it very clear that all of creation is eagerly and intensely anticipating the day when the glory of God that is already deposited within God’s saints will be revealed. That day won’t completely arrive until the Second Coming of the Lord, but it is logical to think that creation rejoices to some degree every time a saint manifests His glory here on this earth.”

“We are already the sons of God. This is not something that has yet to transpire. All of creation is waiting for us to manifest what is already in us,” Wommack adds.

“Beloved, now are we the sons of God, and it does not yet appear what we shall be: but we know that, when He shall appear, we shall be like Him; for we shall see Him as he is” (1 John 3:2).

Even though not intending to form a new church or denomination, their rejection of Landmarkist values placed them in conflict with traditional churches in…