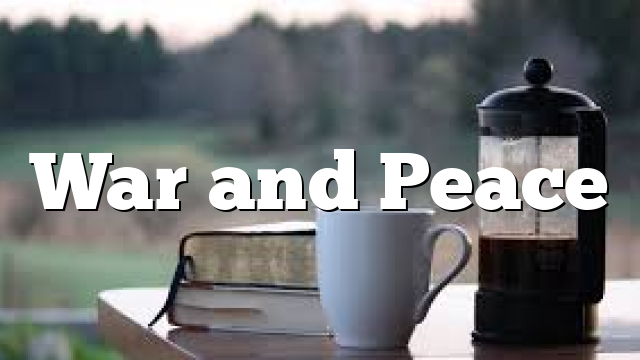 Republished on Facebook since this word seems even more urgent than when first written, especially with the worldwide spiritual warfare needed to end the Corona Virus pandemic. – 4/4/2020

War and peace, a time of war and a time of peace, increasing war and increasing peace – We are entering into a time when the battle against the enemy is intensifying, but God’s people are growing stronger in the Lord, trusting Him and experiencing a great peace, yes peace in the midst of the storm. The Lord says, will you trust me and join the battle now?

There is a renewed confidence within the Kingdom, as the people of God are pressing in, drawing near to Him, growing hungry and being filled. The voices of prayer, the sounds of worship are everywhere, and the people of God will no longer be restrained by fear and apathy, strife and division, selfishness and complacency. The Lord says, will you trust me and live in my presence now?

They are rising up as a mighty army of love-struck prayer warriors who know their God, and live and serve in renewed hope. With strong faith and boldness, they are exposing and tearing down the fortresses of the enemy. The Lord says, will you love Me and serve Me now?

War and Peace together! The people of God are increasingly rising up and taking charge in this darkening world, a great light pushing back the darkness from engulfing the world. They are receiving and believing God’s Word, reinforced in their lives by prayer and worship, relying on the empowerment of the Holy Spirit to boldly obey the holy direction of our Father, peering into heaven to see what He is doing and saying. They are excited, but they are at peace. The Lord says, Will you be that light in the world?

The Enemy Is Getting Desperate

And the devil doesn’t like it! Satan and all the powers of the air are getting desperate. They were defeated on the cross by our Lord Jesus Christ, who rose again to indwell all who would receive Him through the Holy Spirit, yes even the great mystery of the ages, Christ within us, the hope of glory.

The devil was defeated, but then he saw people who did not believe and receive the love of the Lord, people selfish and not living by the law of love, people divided and in strife, doing their own thing, people speaking the Name of the Lord but living by the flesh rather than the Spirit. And the enemy was emboldened, and by deception and confusion, he divided nations, he divided families, he divided churches, he divided hearts, he even divided people’s affection away from the God of love.

He has been not only the accuser of the brethren, but the accuser of God, saying “God is in control, and He will punish you,” saying “tragedies and disasters are acts of God,” undermining peoples trust and love of God, stealing the Word of Truth sowed in their hearts. In the last days, men’s hearts will grow cold. But why do they grow cold? Because they don’t know me and believe the lie. The Lord says, will you honor My Name and My character before the world?

This is a new day, a new hour in eternity. As millions of believers have one by one stepped over the threshold of Kingdom life in these last few years of preparation, the choice has become clear, and they have chosen Life in the Spirit, which brings life, over life in the flesh, which brings death. And the scales have been tipped.

The Kingdom marches forward against seeming insurmountable odds. We believe for breakthrough! The time is here! “Your kingdom come, Your will be done, on earth as it is in Heaven.” The Spirit of God is within us. We are being renewed and restored. Our new life, our light, will no longer be bottled up, but spread to those around us and to the four corners of the world.

The Lord is marching forth! Be awake and alert. The Lord is marching forth! Do not be left behind in this move of God. Chose life now, and you will not be disappointed. Press in; come before the presence of the Lord. A renewed faith will reign in your heart, and you will have a great peace that surpasses all understanding, even in the midst of war.

Do not fear the battle, but look around you at the great company you keep, multitudes of saints and hosts of angels, and “look unto Jesus,” the author and finisher of your faith.” The Lord says, “In the natural, one would look at Me, and die. But you are in the supernatural realm. You may look at Me and live, yes, live even the God life in this world.”

The Lord, the Overcomer, is in our midst. Forget the past and join in, for this is the day of success. “Consecrate yourself daily to my service. You are anointed today for victory. Do not let this day go by.” It is a time of war, but also a time of peace. So be encouraged! We win!

THEY THAT WAIT UPON THE LORD