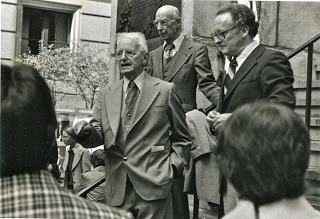 In response to criticism regarding his supposed failure to delineate between apologetics and evangelism, Cornelius Van Til stated:

You are certainly right in saying that I did not, in the discussion among Mr. White, Mr. Grey, and Mr. Black, make any sharp distinction between witnessing to and defending the Christian faith. I am not convinced by the evidence from Scripture which you cite that any sharp distinction between them is required or even justified. My defense of the truth of Christianity is, as I think of it, always, at the same time, a witness to Christ as the Way, the Truth, and the Life. We do not really witness to Christ adequately unless we set forth the significance of his person and work for all men and for the whole of their culture. But if we witness to him thus then men are bound to respond to him either in belief or disbelief. If they respond in disbelief they will do so by setting forth as truth some ‘system of reality’ that is based on the presupposition of man as autonomous. I must then plead with them to accept Christ as their Savior from the sin of autonomy, and therewith, at the same time, to discover that they have been given, in Christ, the only foundation for intelligent predication.” [1]

“Van Til, then, is not simply a philosopher with a heart for preaching. Indeed, he is not merely a theologian with a heart for preaching. He is a preacher, concerned to begin where a preacher begins, with the authority of God’s own revelation, and to do what a preacher does, confront unbelief and nourish faith with ‘thus saith the Lord.’ In all his apologetic labors he continually stands with the Apostle on Mars Hill, not debating the probability of God’s existence, but proclaiming the Creator God who holds all men accountable before the judgment of the risen Christ.” [2] More here.

FacebookTwitterSubscribe
Subscribe to receive all news to your email or phone: [wysija_form id="1"]
perichoresistilvan

We are already in the ark of the redeemed. Let us now sail the ark of grace through faith for daily victorious living….