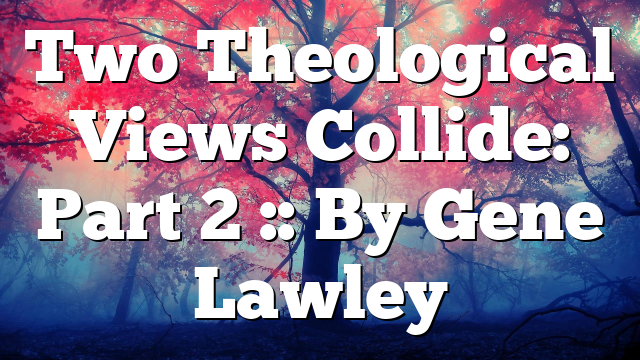 When proponents of Calvinism express their thoughts on Calvin’s five points of theology (TULIP), they seem to struggle with how man is able to get right with God since he is totally depraved. It seems to be a mystery how that gap is overcome. Let’s look into the beliefs of Reformers/Calvinists, as their major icon, the late R. C. Sproul, has discussed Total Depravity.

Sproul seems to struggle with any clear explanation of how the totally depraved are turned to a desire for God. His discussion of Total Depravity in the Calvinist TULIP outline leaves it to a work of the Holy Spirit. He says, “We need to be regenerated, to be made over again, to be quickened by the power of the Spirit. The only way a person can escape this radical situation [total depravity] is by the Holy Spirit’s changing the core, the heart.”

You would think he might refer to John 3:3-5 where Jesus says, “You must be born again!” But then, he does not tell just what takes place that brings about that new birth. It is a bothersome thing that Calvinists latch onto their being chosen by God, “and they had nothing to do with it!”

We will look more closely at that next, but for now, let’s see what the Scriptures say about “what we have to do with it.” Romans 2:14-16 has a very important truth that apparently is missed by the Calvinists, for it describes mankind as having a conscience in which is embedded with the knowledge of right and wrong. It says, “for when Gentiles, who do not have the law, by nature do the things in the law, these, although not having the law, are a law to themselves, who show the work of the law written in their hearts, their conscience also bearing witness, and between themselves their thoughts accusing or else excusing them in the day when God will judge the secrets of men by Jesus Christ, according to my gospel.”

This is the passage that also answers the question of “what happens to those who never hear the gospel?”

Anywhere in the Bible where it tells of how someone is saved, you do not hear the words, “I was chosen by God.” When the Philippian jailer asked Paul, “What must I do to be saved?” Paul did not say, “You must be chosen.” He said, “Believe on the Lord Jesus Christ and you will be saved.”

The teaching of the parable in Matthew 22:1-14 is summed up by Jesus with this statement: “Many are called, but few are chosen.” Why not? Because the called do not respond to the invitation. Romans 10:13 says, “Whosoever calls on the name of the Lord will be saved.”

Finally, we see how the Holy Spirit worked in the conscience of Saul of Tarsus, as it is told of him on the road to Damascus in Acts 9. He was burning inside with the hearing of Stephen’s testimony earlier, and his conscience was convicting him.

Unconditional Election is the next doctrine in the TULIP lineup.

According to R. C. Sproul, “Unconditional Election means that God does not foresee an action or condition on our part that induces Him to save us. Rather, election rests on God’s sovereign decision to save whomever He is pleased to save.”

That definition alerts one to the very evident Scriptures that detail how a person becomes a Christian. That is, as John 1:11-12 tells us, “He came to His own [kinsmen], and His own did not receive Him. But as many as received Him, to them He gave the right to become children of God, to those who believe in His name.”

It is clear that Proverbs 9:10b holds a truth that must be considered here, for that passage says, “And knowledge of the Holy One is understanding.” Will God ever violate His own attributes? Will He contradict Himself? Then how can He “save anyone He is pleased to save” and merely reject others?

2 Peter 3:9 tells us, “God is not willing that any should perish, but that all should come to repentance,” and Romans 10:13 says, “whosoever shall call upon the name of the Lord will be saved.” (The 2 Peter passage comes up again in Part 3.)

God is no respecter of persons, an attribute of His character, and He has given man the right of choice. The many invitations and instructions on how to be saved recorded in the Scriptures are not hidden from mankind.

Even the Apostle Paul had the process figured out, for he told Timothy, in 2 Timothy 2:10, “Therefore I endure all things for the sake of the elect, that they also may obtain the salvation which is in Christ Jesus with eternal glory.” Thus, God’s foreknowledge does not save anyone, for each person must accept Christ as their Savior. As to how this basic response to the gospel’s invitation fits into the plan of salvation according to R. C. Sproul, he says trust in Christ is for justification. But actual salvation, apparently, depends on one being elected by God.

Uncertainty seems to overshadow their struggles to fit into place the Reformed/Calvinist concepts of what is biblical truth. If they are right, then where is the “simplicity in Christ” that the Apostle talks about?

Sproul goes into the Romans 9 discussion of Jacob and Esau, where it says, “Jacob I loved, but Esau I hated.” It seems contradictory to His attribute of having no respect of persons when it seems there is no reason for His choices. Again, what are the attributes of the Lord? Something is not falling into place as it should be, and the answer is found in the “whole counsel of God.”

In God’s foreknowledge of those twins, Jacob and Esau, when the firstborn was to inherit the blessing of his father, what did He see? He saw what Hebrews 12:16-17 tells of Esau’s character: “Lest there be any fornicator or profane person like Esau, who for one morsel of food sold his birthright. For you know that afterward, when he wanted to inherit the blessing, he was rejected, for he found no place for repentance, though he sought it diligently with tears.”

Esau, as the firstborn, was in line to be the father of the twelve tribes of Israel, as God’s foreknowledge knew it to be. A study of the lineage of the Jewish kingships from Abraham to Christ will turn up some very interesting events that depict the direct intervention of Satan to corrupt that lineage. When this is factored into the account of God’s disfavor of Esau, a totally different picture comes forward.

The simple truth is that only when a person has received Christ into his life by personal choice does he realize he has been chosen, elected, and predestined. It is not a two-part situation, for the gift of eternal life is what God offers, and a gift must be received for it to be effective. 1 John 5:11-12 spells it out: “And this is the record that God has given to us eternal life, and this life is in His Son; he who has the Son has life and he who does not have the Son does not have life.”

Therefore, to follow the beliefs of the Reformers/Calvinists, one must discard whole passages of the Scriptures as being insignificant and meaningless. This will become abundantly clear as we continue on the TULIP trail in Part 3.

Let me take you back to Athens