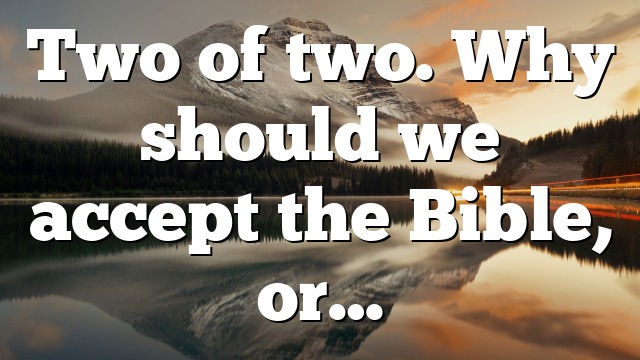 Why should we accept the Bible, or any book, as correct without good evidence?

Do you assume that any book you have is true without proven evidence that that is the case?

The Book of Mormon is accept by millions of Americans as the word of God. And many will “testify” that they have had an experience; a warming of the heart or their chest as evidence that it is true.

If one is a Christian, then one’s approach to the issues I have raised will be one of defense; apologetics. “It must be the Word of God, because I had an experience with (God, Jesus, Allah, etc.)

It must be clear to some people that not everything we believe is true. No matter how strongly we believe it. Whether we were raised in a particular belief or we converted to a belief, is not reason enough to simply accept what we believe.

Is the Bible true?

Well, there are historically referenced people and places, but what does that prove?

It was once thought that the city of Troy was simply a Homeric myth. Until Troy was discovered. What then, does that prove that Zeus exists? That all that is said that he had done in fact happened? That all the miracles that are attributed to him are true? But archeology supports Homer? There are cities and reference that he mentions that are true?
If archeology supports Homer, why not accept that?

It is suggested that archeology supports the Bible, at least some of the history. Does that mean the Bible is completely true? No.

If one begins with an objective, non committed perspective, how would they view my points:

1. Mistakes in the Bible.

If someone was not a “Christian,” and read my points, would they still consider the Bible to be something more then mythology?

In his book “99 Questions People Ask Most About the Bible,” Don Stewart says, “The benefit of the doubt should be given to the Bible, not to the critic, and the work should be assumed to be correct until some evidence is brought forth contradicting what has been said.” (p.29)

There is not a history book nor a book attributed to someone that has not been questioned. Plato; Aristotle; Homer; even Shakespeare have been questioned. No historian simply accepts Josephus or Philo simply because it was written down and thought to be a history. It has been discovered that much of it is true, but parts are in question.

So, why can we not question the Bible?

I suggest that it is because either we were raised in a Christian home or we were converted. Meaning we had a salvation experience by accepting Jesus Christ as our Lord and Savior.

Now if someone was to question that… (?)

You see, the Bible must be true or we are not saved. Never mind any evidence to the contrary.

“God exists and he loves us. So, he communicated with humankind through his word and his word is the Bible.”

With what little proof exists I once believed. But the closer one examines it, the less likely it appears to be true.

There are answers to the mistakes in the Bible. Sometimes any answer will do. But not all of them can be answered. So the mistakes remain.

But it is not simply the mistakes that prove the Bible to be of human origin, it is the origin of the Bible that proves it.

Salvation experience aside, and all of the assumptions that go with that experience, the Bible is a collection of writings written and collected by human beings and only human beings trying to find and discover answers to the questions of life.

Jesus may have been an interesting person, but only a man. People after him told tall tails of someone that became a God. But since there is only one God, we create the trinity, etc.

And the myth continues.

I have made the choice to only believe what is true. But that is a choice I made. No one else has to make such a choice.

You can continue to believe that there is a God, that he had a son, and that his son died for you. I did.

I no longer hold to this belief because the evidence does not support this belief. But that has not stopped millions of people from believing this nor the Qur’an nor the Book of Mormon. People will believe in false beliefs long after I am gone.