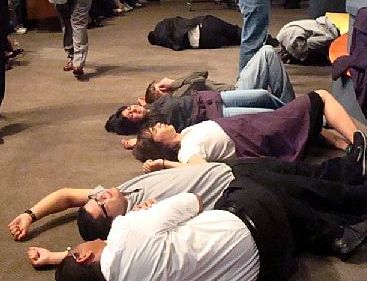 Can you bro/sis explain believers “falling to the ground” or other calls it “slain in the spirit” experience? Is it biblical? Its happening in our church.

Thangsan Hisfootstep [03/01/2015 9:57 PM]
This is what’s happening during one of my recent evangelistic rallies in a remote country side last moth.

Ermar Reyes Luna [03/24/2015 2:34 AM]
We cannot ignore those who are honestly convince that there are people who are simply being pushed by the one who are ministering, so they fell and there are some who are emotional sensationalist who make themselves fall. There are after side manifestation of the glory but not after the transformation which the glory of God can bring.

Ermar Reyes Luna [03/24/2015 2:54 AM]
Upon studying the Scriptures, we can make the following conclussion on falling under the power:

1) Let me first point out that the word ‘slain’ always have a negative implication. The phrase “Falling under the power” or ‘slained in the Spirit’ cannot be found in the Bible

We cannot see this words/phrase on the Bible. It only means that there was not a phenomena like this found in the Bible that was put into emphasis by the early believers for to be a focal sign of the move of God.

“So that the priests could not stand to minister by reason of the cloud: [[for the GLORY of the Lord had filled the house of God]].” (2Chro. 5:14)

What is important or want do we want to seek? Manifestation or God’s glory? Manifestations that let us experience God’s presence is there or the Glory of God? What are you seeking?

“And as he journeyed, he came near Damascus: and suddenly there shined round about him a light from heaven: And he fell to the earth, and heard a voice saying unto him” (Acts 9:3-4).

And it came to pass, that, as I made my journey, and was come nigh unto Damascus about noon, suddenly there shone from heaven a great light round about me. And {I fell unto the ground}, and heard a voice saying unto me, Saul, Saul, why persecutest thou me?

Saul who became Paul later that persecuted Jesus and His followers, when he saw the Glory of Jesus fell to the ground.

Ermar Reyes Luna [03/24/2015 3:10 AM]
3) There is no Scriptural basis for establishing the spirituality of the individual by whether he fells under the power of the Holy Spirit or not.

There are no biblical basis for us to measure an individual’s spirituality only through these fallings, courtesy drop, or not falling at all. Both believers and unbelievers fall from the text we have shown.

The men who came to capture Jesus, were slain under the power when Jesus answered them but they remain unchanged in the evil pursuit to crucify Jesus (John 18:6,12)

Ermar Reyes Luna [03/24/2015 3:21 AM]
5) There are those who received a special blessing and transformed in their lives. Paul received his call and his life was totally transformed after his Damascus experience (Acts 26:12-19). His life was motivated by the heavenly vision he saw in Damascus. Adam was put under the power in order for God to create a woman out from his rib (Gen. 2:21-22).

There are far more important things that God wants from us to be changed and things that He wills to give us as tasks to be done than just let us experience fallings in His presence.

Ermar Reyes Luna [03/24/2015 3:23 AM]
6) The scriptures treat it as a side-effect phenomenon and not an experience to be sought. Jesus ignored the fact that His captives were slain under the power (John 18:67). He did not pay attention to those phenomena.

When Ezekiel fell under the power upon seeing the glory of God, God asked him to STAND UP so that He could speak to him. “And he said unto me, Son of man, STAND UPON THE FEET, and I will speak unto thee.” (Ezek.2:1)

Ermar Reyes Luna [03/24/2015 3:26 AM]
Jesus’ purpose for manifesting to Paul was not to make him fall under the power (the Lord commanded Him to arise) but to speak him and commission him for the work of the gospel.

“But RISE, and STAND UPON THY FEET: for I have appeared unto thee for this purpose, to make thee a minister and a witness both of these things which thou hast seen, and of those things in the which I will appear unto thee.” (Acts 26:16)

THE PURPOSE OF THE ANOINTING IS TO BREAK THE YOKES, TO DESTROY THE WORKS OF THE DEVIL OVER PEOPLE’S LIVES AND NOT JUST TO PLAY DOMINOES.

Ermar Reyes Luna [03/24/2015 3:29 AM]
One time the Lord gave a dream to one prophetic Teacher that I knew. In the dream, he saw a huge cloud over the earth. It was so thick that you could literally break a piece out and mould it. Then he saw people taking pieces out of the cloud and formed it into ball. The piece they took out became real ball and they are playing wth it. It was then that God’s Spirit woke him up and he heard the Spirit said, “Son, My people are playing are playing with My anointing. They enjoy making others fall under the power but they are not using the anointing to do the the works of Jesus. If they will concentrate on doing the works of Jesus with the anointing, I will show them the greater works.

Sometimes people instruct others what to do during ministry, with the purpose of getting them to fall under the power. This weakens the anointing. More people will fall but less people are healed. The power of the anointing is weakened through dissipation. Even in the law of electricity, a current from 12 volt baterry running twenty electrical appliances is weaker than when it runs one electrical appliance.

Ermar Reyes Luna [03/24/2015 3:31 AM]
REMEMBER THAT EVERY TIME GOD MANIFEST THERE IS A PURPOSE. HE DOES NOT SHOW VISIONS WITHOUT A PURPOSE. IT GOES ON WITH OTHER MANIFESTATIONS OR ALIKE.

If the Corinthian church could make genuine tongues a source of confusion without edification by misapplying (1 Cor. 14:16,23) modern Christians who discover the falling under the power of the Holy Spirit can misapply a genuine manifestation of God’s anointing.

God anointed us to preach the acceptable year of the Lord; heal the broken hearted, preach deliverance to the captives, recover the sight of the blind and set liberty those who are oppressed. Whether they fall or not is a side phenomena but the call is to set them free by the power of the Holy Spirit.

Mark Biteler [03/24/2015 3:32 AM]
To say, “it is only a side affect of the manifestation of God’s glory” is to say..what? That how, or to what extent or magnitude/degree the Lord’s glory affects a person is inconsequential? I’m definitely not signed up for that. The ministry is to preach the word AND demonstrate the power. We will do well to allow the Holy Spirit to touch His people and manifest His presence as He sees fit in any way He sees fit, through whoever He chooses. For the most part, many in the Church (certainly in America and Europe) never experience (feel, or as Paul said it, “know”!) anything. Falling under the power IS a phenomena – a sign/wonder in the Bible…it is not “an emphasis by early believers”. So a believer needs to be healed; should we say to them, “You should not come seeking healing…you should come seeking transformational change and the Glory of God”? Let’s get real. Where should the “cut off” be…so those that desire to be touched by the Lord come forward but we want them to instead…what?…get another lecture on seeking the Glory not a manifestation of that Glory. Let the sheep come to the Shepherd who died and rose again to meet their needs. Paul’s concern that the faith of believers in Corinth should should “rest” – lit. be) on the power of God, not the wisdom of men…not the other way around. We have multiple generations in the Church that know nothing of the power of God. Who can say that the manifestation of the power of God in any form, great or small, is not transformational? If the Spirit reveals that their focus is wrong, like those who followed Jesus for food rather than Him, then we must provide correction. Otherwise, whosoever will come to the altar to meet the Lord, let them come.

John G. Lake in his book on ‘Dominion Over Demons, Diseases & Death’, (page 114) speak of a young man who prayed for 150 people and about one hundred fell. He observed that the only first twenty-five were really healed, and after that they just fell to the floor. He took the young man home and asked him wether he knew why only the first twenty-five got healed. The young man replied that he did not now why but was pleased with those who fell.

John G. Lake answered and said the following statement which would be useful for us to keep in mind.

“When you started to pray for those people, your soul was lost in the Son of God and you were hardly conscious anybody had fallen. But when you saw them strewed all around, then you forgot the face of Jesus, and became absorbesin the phenomena. That is why they did not get anything. You forgot to connect faith with power”

Beloved, let us keep in mind that it is far more important to get them healed than to get them fallen. And above all it is of utmost importance to get them born again. Let us not major on the minors and minor on the majors. Thank God for the manifestation and side effect manifestation of the anointing of the Holy Spirit but KEEP YOUR EYES ON JESUS AND NOT ON THE PHENOMENA. We would do people injustice if we get carried away with phenomena instead of concentrating on permanent result.

John Kissinger [03/24/2015 6:47 AM]
Some make the case that in the Bible falling is always on your face, not on your back. TRUE. Yet, being slain in the Spirit is Biblical. We should not make it the purpose of service, but if it’s occurs its OK!

Thangsan Hisfootstep [03/25/2015 12:03 PM]
I do agree that it is a phenomena not the purpose itself, but have some uneasiness with the word “side-phenomena” to b honest.