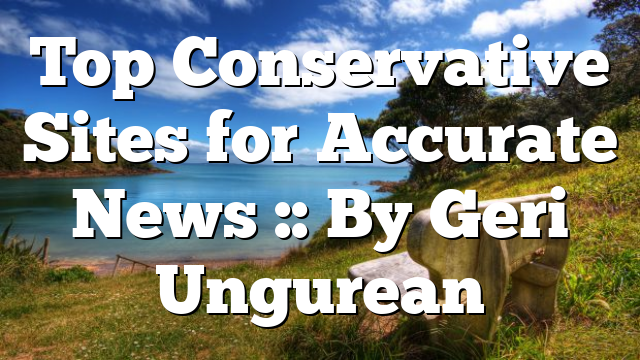 Would you place a bottle of arsenic in your pantry? (rhetorical question) So WHY would you subject yourself and your families to TOXIC LEFT-WING NEWS?

After a year that saw news and media sites take a big hit from the public over spin, bias, and poor coverage, many are searching for solid conservative sites that can be relied upon to keep both the “clickbait” and the fake news to a minimum. With so many news sites available, sorting the good from the bad and the downright ugly gets tricky. But fear not. We want to welcome you to the most popular Top 20 on the web: Liberty Nation’s Top 20 Conservative News Sites to read in 2022.

For the last three years, LN has generated the most wildly successful list of news sites conservative folks are actually reading. Our scoreboard remains the number one DuckDuckGo search result for Top Conservative News sites. And 2022 looks like it’s going to continue from strength to strength.

This Top 20 is not based on Alexa rankings, nor is it just a list favored by LN News; it’s much, much more. The LN methodology involves extensive polling of conservative readers, coupled with input from Liberty Nation authors†. Our algorithm factors in last year’s results to ensure balance and to reflect changes over time.

We believe this Top 20 represents the most accurate reflection of the top news sites being read and enjoyed by conservatives on the internet.

Unlike many lists out in the Wild West of the web, Liberty Nation’s is not based purely on how many hits the site receives. Without sounding too imperious, we like to say “clickbait factories” need not apply. Instead, our Top 20 represents sites with a combination of talent, style, readability, analysis, and provocative thought. We believe conservative readers are an intelligent group where spin is unnecessary.

Without further ado, we proudly present our countdown of Liberty Nation’s Top 20 Conservative News Sites to Read in 2022!

I must add one to the list below: The New American thenewamerican.com

Also, please send me your favorite Conservative sites, and I will consider expanding the list below.

Its second year at the top of the list, The Federalist is a powerhouse of conservative thought with superb writers. Rather than focus on breaking news, this site is a bastion of depth, breadth, and analysis. If you’re looking for rational and logical refutations of the leftist worldview, this is an excellent place to start.

Epoch continues its rise in the rankings after appearing for the first time last year in sixth position. The site offers the whole package: breaking news, analysis, opinion, and some exclusive shows. Although Epoch’s digital site has a bit of a tangled and overcrowded look, readers appreciate its voluminous content that carries with it considerable original reporting.

Breitbart is the go-to site for ample coverage of all things political and cultural. It has built a well-earned reputation for its bold style and out-of-the-box conservative/libertarian thought and is the flagship of in-your-face conservative commentary. Breitbart pulls few punches, earning it the eternal contempt of the left – which its writers and editors consider a badge of honor, no doubt.

With no-holds-barred deep dives into interactive topics of national security, diplomacy, economic policy, and more, American Thinker has become a staple for those who want more than just surface-level coverage of stories important to conservatives.

Townhall offers a wide variety of content from notable free-market figures and is considered a must for conservative news junkies seeking reliable coverage of the big issues. It is a classic oldie, but goodie.

Still a relative newcomer, award-winning investigative journalist John Solomon’s Just The News continues to make gains. Jumping seven places on the scoreboard, this site has excellent reporting, superb coverage, and a fast-growing media presence – all in a tidy format that is up-to-date and easy to navigate.

Gateway Pundit has a well-earned reputation for offering fresh angles on old news and unveiling stories hard, if not impossible, to find elsewhere. It’s a go-to site that is certainly one to keep watching in the future.

PJM is a casual, entertaining, and thought-provoking site that covers not only politics and culture but also delves into subjects such as faith and parenting. This site doesn’t hold back in going after the left – and it does so in an entertaining and often engaging manner.

Hard-hitting news and commentary with a distinctly conservative slant, The Washington Examiner makes its first appearance on the Liberty Nation scoreboard. An easy-to-navigate site, it offers print and digital editions that have become a staple for conservative readers.

Offering a mix of finance, economics, and politics, ZeroHedge is one of the leaders in the conservative and libertarian markets. With spicy takes, solid data on investing, and more than a little humor, this site is a popular resource with a growing audience.

A longtime leader in conservative thought, The American Spectator offers up content that is at once strikingly original, thought-provoking, plain-spoken, and often satirical. Conservative readers continue to applaud the Spectator for its high-quality content.

This libertarian site tied to the Reason Foundation covers politics and culture – and a good deal of humor in its videos – through an ideologically consistent lens of individual liberty and the free market.

A tried-and-true lifeline for the die-hard conservatives living in and around D.C., WT has rightly been recognized as a stalwart of contrarian opinion coupled with solid journalism. Its slogan says it all: Reliable reporting, the right opinion. A site that continues to deliver.

Judicial Watch is perhaps best known for its aggressive pursuit of official wrongdoers. It offers a superb example of a site that does not necessarily attract the most viewers but provides exceptional content that our writers and readers value and therefore rate highly.

Founded by William F. Buckley Jr. in 1955, National Review has been at the forefront of conservative thought for more than 60 years. It has long been an innovator in the industry, offering both print and digital editions. With solid writing and enjoyable observations on culture, the Review is one of the leading lights for those who prefer their news with a little more weight as befits that old-fashioned Buckley gravitas.

Providing the very best and up-to-date information on national and local polling, coupled with a selection of keen analytical articles, Real Clear Politics is an absolute must for those wanting to stay ahead of the political curve.

One America News Network is a firm favorite with conservatives. Offering thoughtful television programs and a companion news site, its growth over the last two years has been nothing short of phenomenal.

With a range of political coverage and a heavy focus on breaking news, The Western Journal is a reliable source for finding out what’s happening in D.C. and around the country.

* The Washington Times, National Review, and The American Spectator have a limit to the number of free articles you can read before requiring a subscription.

Sometimes we Christians assume that Conservative sites will naturally be pro-Christian as well. Unfortunately, that is not always the case.

I was reading an article on Westernjournal.com last week, and I was angered by some glib comments about Christianity.

I wanted to mark that news source off of my go-to list. But then “Throwing the baby out with the bathwater” came to mind. I made a mental note to be cautious with that outfit. I also wrote to the Chief Editor and told him what I thought about this. I have not heard back – no surprise there.

In these end times, we (Christians) must be so careful and discerning about everything we read or see on the internet.

HOW CAN I BE SAVED?

Acts 4:12 is NO proof for ONENESS theology

Acts 4:12 [12]Neither is there salvation in any other: for there is none other name under heaven given among men, whereby we must be…