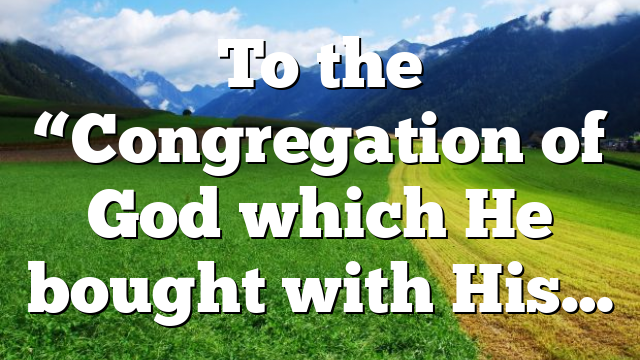 To the “Congregation of God which He bought with His own blood.”
ACTS 20:28
YAHUSHUA MASSIAH IS YAHUAH ELOHIM, HE IS THE REDEEMER AND SAVIOUR OF THE WORLD.
“In the beginning was the Word, and the Word was with God, and the Word was God.
The Word became flesh and dwelt among us.
We observed His glory, the glory as the one and only Son from the Father, full of grace and truth.
Indeed, we have all received grace upon grace from his fullness.
No one has ever seen God.
The one and only Son, Who is Himself God and is at the Father’s side — He has revealed Him.”
John 1:1‭, ‬14‭-‬14‭, ‬16‭, ‬18
1 Timothy 1:17
“There is one God, and one mediator between God and men, the man Messiah Yeshua, who gave Himself as a ransom for all, the testimony in its own times.
1 Timothy 2:5‭-‬6
“But all things are of God, who reconciled us to himself through Yeshua the Messiah, and gave to us the ministry of reconciliation; namely, that God was in Messiah reconciling the world to Himself, not reckoning to them their trespasses, and having committed to us the word of reconciliation. For Him who knew no sin He made to be sin on our behalf; so that in Him we might become the righteousness of God.”
2 Corinthians 5:18‭-‬19‭, ‬21
“Raised us up with Him, and made us to sit with Him in the heavenly places in Massiah Yahusha, that in the ages to come He might show the exceeding riches of His grace in kindness toward us in Massiah Yahusha; for by grace you have been saved through faith, and that not of yourselves; it is the gift of God, not of works, that no one would boast.
For we are His workmanship, created in Massiah Yahusha for good works, which God prepared before that we would walk in them.”
Ephesians 2:6‭-‬10
“He has rescued us from the domain of darkness and transferred us into the Kingdom of His dear Son.
It is through His Son that we have redemption — that is, our sins have been forgiven.
He is the visible image of the invisible God.
He is supreme over all creation.
He existed before all things, and He holds everything together.
He is the Head of the Body, the Messianic Community — He is the beginning, the firstborn from the dead, so that he might hold first place in everything.
For it pleased God to have His full being live in His Son and through His Son to reconcile to Himself all things, whether on earth or in heaven, making peace through Him, through having His Son shed His blood by being executed on a stake.
In other words, you, who at one time were separated from God and had a hostile attitude towards Him because of your wicked deeds, He has now reconciled in the Son’s physical body through His death; in order to present you holy and without defect or reproach before Himself — provided, of course, that you continue in your trusting, grounded and steady, and don’t let yourselves be moved away from the hope offered in the Gospel you heard.
This is the Gospel that has been proclaimed in all creation under heaven.”
Colossians (Col) 1:13‭-‬15‭, ‬17‭-‬23 CJB
“The household of God, the Messianic Community of the living God, the pillar and support of the truth.
Great beyond all question is the formerly hidden truth underlying our faith:
God was manifested physically and proved righteous spiritually, seen by angels and proclaimed among the nations, trusted throughout the world and raised up in glory to heaven.”
1 Timothy (1 Ti) 3:15‭-‬16
“We know that the Son of God has come and has given us discernment, so that we may know Who is genuine; moreover, we are united with the One who is genuine, united with his Son Yeshua the Messiah.
He is the genuine God and eternal life.”
1 John 5:20
“Now to Him who is able to keep you from stumbling, and to present you faultless before the presence of his glory in great joy, to God our Savior, Who alone is wise, be glory and majesty, dominion and power, both now and forever.”
Amen.
Judah 1:24‭-‬25
“If our gospel is veiled, it is veiled to those who are perishing, whose minds the god of this age has blinded, who do not believe, lest the light of the Gospel of the Glory of Massiah, Who is the image of God, should shine on them.”
II Corinthians 4:3‭-‬4
Phil J Cornelius

“The Happy Hunters:” The “disciples’ authority” recovered   One would think that after over a hundred and fifty years of exploring and developing the…