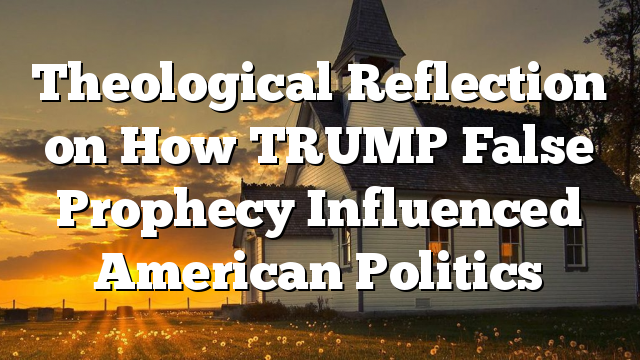 For Christians who believe in the continuing gifts of the Spirit, testing national prophecies is a tricky task. In every election cycle, there are prophets announcing who the Lord’s pick is, and which candidate will win. In 2012, for instance, the prophetic consensus was that Mitt Romney was the Lord’s choice and that he would win. They were wrong.

In the 2016 election, Trump emerged as the prophets’ pick. As early as 2007, Kim Clement had delivered a prophecy that God would “raise up the Trump to become a trumpet.”[1] In 2011, ex-fireman Mark Taylor received a series of visions and locutions stating that Trump would become president and was chosen by God to bring America back to righteousness and its true Christian calling.[2] In July 2015, Charisma magazine published a prophecy by Jeremiah Johnson that God was raising up Trump to be a Cyrus figure in the 2016 election, and that Trump would be like “a bull in a china closet”[3] (Cyrus was a pagan king who was anointed by God to return the Jews to their homeland). In fall 2015, businessman Lance Wallnau prophesied that Trump was God’s “chaos candidate” and would be a “wrecking ball to political correctness.”[4] Numerous other, lesser-known prophetic people also reported dreams and visions showing that the Lord had a special purpose in Trump becoming president.

These prophecies played a large role in gathering charismatic support behind Trump and eventually securing his victory.  Looking back, did these prophets truly hear from the Lord? Or did soulish “wish for” prophecies lead to an outcome that was not, in fact, what the Lord had intended?

As we head into the 2020 election, how should believers weigh the Trump prophecies? Should we take them at face value and conclude that Trump is the Lord’s anointed, and so vote for him, because to do otherwise would be to oppose the Lord? Or should we view them skeptically and vote on other criteria, such as the candidates’ character and position on relevant issues?

In his new book, On Discerning Trump’s Character and Presidency:  A Theological Reflection on How False Prophecy Influenced American Politics, historian William De Arteaga offers insight on these questions. For those familiar with De Arteaga’s excellent book Quenching the Spirit, it comes as no surprise that De Arteaga brings his considerable grasp of history and discernment literature, as well as his penetrating insight, to this work.

The first three-quarters of the book are actually not about discerning the prophecies themselves, but about discerning Trump’s character and his presidency. De Arteaga also traces what he sees as the decline of culture and of the Republican Party that made Trump’s presidency possible. While this may seem like a detour, it lays important groundwork for De Arteaga’s ultimate argument that the prophecies were wholly or in part false.

De Arteaga begins with an assessment of Trump’s character. Like others before him, he blasts Trump’s habitual reviling of opponents, his “aggressive speech and uncharitable tweets and off the cuff remarks” (14), and how these behaviors have contributed to the decline of civility and reasoned discourse in American politics. He questions how a man who frequently lies can be trusted. De Arteaga expresses disappointment that Christians would excuse and even embrace Trump’s immoral behavior and links this attitude to antinomianism – the heresy that conduct does not matter so long as one confesses Jesus as Lord. The analysis in this section is erudite and well-reasoned, but not especially novel if you’ve followed other criticisms of Trump in National Review, First Things, etc.

De Arteaga then traces the events that led to American Christians’ increasing sense of persecution by mainstream culture and secular authority to the point that many viewed 2016 (to borrow Michael Anton’s arresting metaphor) as the “Flight 93 Election.” The increasing secularization of education and popular culture, Supreme Court decisions and liberal legislation chipping away at traditional understandings of the family and sexuality, and the eradication of Christian values in schools led to a situation in which many American Christians felt they needed to turn the tide at any cost.

The most interesting part of the book is where De Arteaga specifically looks at the Trump prophecies and compares them with instances of false prophecy by sincere Christians in the past.

De Arteaga insightfully points out that evangelicals and charismatics tend to be largely ahistorical:

Many charismatic and non-denominational churches are a-historical: they have little or no understanding of Church history. They usually pay much attention to Scripture, but assume that, for instance, the “Catholic” period of the Church is so full of error it is not worth learning about. The Patristic period of the Church Fathers, and their wonderful discernment writing might as well have been written for another planet and race of beings. (83)

This ahistorical approach to Christianity has serious consequences. As is often said, those who do not learn from history are doomed to repeat it. False prophecy is not a new phenomenon. As early as 170 AD, the prophet Montanus prophesied the imminent return of Christ and led many believers astray. While the Catholic Church has dealt with its share of false prophecies, the regular stream of monks, nuns, and laypeople receiving visions and personal revelations led to the development of a rich literature of discernment. Spiritual directors arose to mentor prophetic people and help them discern which revelations came from the Lord, their flesh, or the devil.

The most interesting part of the book is where De Arteaga specifically looks at the Trump prophecies and compares them with instances of false prophecy by sincere Christians in the past.

The Protestant Reformers largely rejected the supernatural and the rich Catholic discernment tradition with it. As a result, when charismatic movements did occur and prophecies emerged, most communities lacked the tools and experience to evaluate prophetic utterances. False prophecies were a constant problem for charismatics, and several revivals, including the Great Awakening (1737-1742) were prematurely ended because of irresponsible prophecies.

De Arteaga discusses the very interesting example of David Wilkerson’s false prophecy, The Vision. De Arteaga does not doubt that Wilkerson was a very anointed minister who bore great fruit for the Kingdom; however, his apocalyptic predictions for 1973-1983 largely proved false. They were based upon “the fears, prejudices, and belief structures of his own subconscious mind and those in his immediate faith community” (76).

De Arteaga makes a strong case that many of the Trump prophecies fit the same pattern. Many of Mark Taylor’s prophecies, for instance, demonize Democratic leaders and unambiguously paint them as evil. They cater to right-wing fears, such as Obama’s intent to strip the people of their guns or run for a third term in violation of the Constitution. And some have proven false with time – for example, the prophecy that Obama would be forcibly stripped of his office instead of leaving gracefully with dignity. De Arteaga’s analysis of the Taylor prophecies is fascinating, and I wish that he had devoted more attention to the other prophets that foretold Trump’s presidency.

In the end, De Arteaga comes to a very nuanced conclusion. He neither says that all of the Trump prophecies were categorically false, nor does he say that they were all true. Rather, he concludes that they may have contained true revelation from the Lord, which got diluted with soulish concerns and wishes. The kernel of truth may have been what led charismatic leaders to embrace the prophecies, and Trump. Nonetheless, De Arteaga chastises charismatic leaders for what has been, for the most part, uncritical support of the President. Even if Trump is anointed by God for a special purpose, the Bible gives precedent for prophets speaking truth to anointed kings. For instance, David was the Lord’s anointed, and yet the prophet Nathan confronted his sin. De Arteaga urges prophetic leaders to fulfill this aspect of their function.

On the other hand, De Arteaga also raises the possibility that perhaps all of the Trump prophecies were false, even demonically inspired, and that following them has led to grave damage in the Body of Christ and to our nation. Many will disagree, but it is a sobering possibility to consider. Whatever you think of President Trump and the Trump prophecies, De Arteaga’s book is a worthwhile and thought-provoking treatment of an important subject.

The Promises of Israel

This is “The Promises of Israel.” Enter into this New Year understanding that what God is doing for Israel, He is doing for you!…