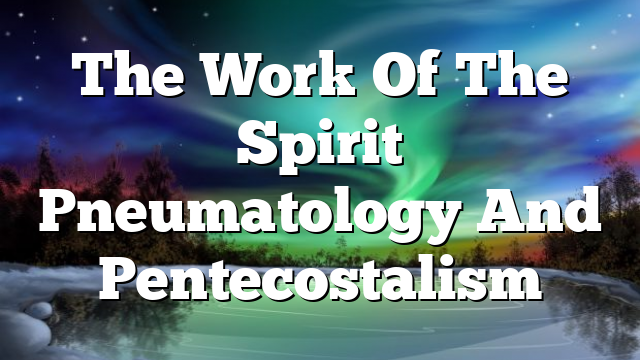 This edited volume is the product of a Templeton Foundation-sponsored symposium on pneumatology. Its contributions fall into three broad categories that respect pneu- matology’s growing role in the dialogue between science and religion.

The ﬁrst section features constructive pneumatologies that draw primarily on ecumenical biblical and historical tradition. James D.G. Dunn examines the distinctive pneumatology of the New Testament church in which Jesus not only received but dispensed the Holy Spirit, and thus the power that had raised him from the dead. This conviction kept the ﬁrst Christians from collapsing pneumatology into Christology or vice versa in either their memories of Jesus or their life as his church. Bernd Oberdorfer draws on patristic, medie- val, and contemporary pneumatologies to describe the Holy Spirit as the autonomous ﬁeld of power that objectiﬁes the Father’s and Son’s community and opens it to the world. T is neither anthropomorphizes the personhood of the Spirit as a quasi-human center of mod- ern consciousness nor turns the Spirit as power into a quality of the created universe. Veli- Matti Kärkkäinen contends for the kind of healthy trinitarian framework to support a theology of religions that enables true interreligious dialogue without sacriﬁcing orthodoxy. It distinguishes itself among recent proposals for a Christian theology of religions by respecting “the universal presence of the Spirit integrally related to Jesus and the cross,” through which the Church is sign of God’s coming kingdom. D. Lyle Dabney uses Genesis 1:1 — 2:3’s prologue to the whole economy of salvation to narrate the Spirit as its primor- dial and eschatological Creator. The Spirit is “the possibility of God” that gives creation both its possibility of life and its new relationship with the Triune God, who is Wholly Other. Kathryn Tanner criticizes theologies that privilege the Spirit’s instantaneous, imme- diate activity over the Spirit’s gradual, mediated activity. She regards them as a modern authoritarian form of dissent that threatens the community authority embodied in the institutions in which the Spirit also patiently works to bring God’s people into all truth.

The second section analyzes various aspects of Pentecostalism. Frank D. Macchia reviews the roots and trajectories of baptism in the Holy Spirit in Holiness and Pentecostal tradi- tions. Spirit baptism has lasting value and ecumenical promise in its appreciation of the eschatological, pneumatological, and missiological dimensions of Christian salvation. Grant Wacker sketches Pentecostalism’s historical place in wider-world Christianity and claims that it has prospered by holding principle together with practicality. Pentecostals longed to know and serve God with powerful and mystical intimacy — yet they pursued that mission through a quiet and competent, even “worldly” pragmatism. Margaret Polo- ma’s sociological analysis sees the Assemblies of God in the midst of an identity shift from Pentecostal to evangelical distinctives. Its character especially in white suburban American circles is becoming “evangelicalism plus tongues,” leaving custodianship of the whole range of qualities that originally distinguished Pentecostalism to immigrants and non-American churches.

The third section explores promising intersections of pneumatology with contemporary science and philosophy. John Polkinghorne demonstrates the complementarity of natural

science and orthodox Christianity by incorporating a doctrine of the “hidden Spirit” into his scientiﬁc-theological cosmology. The universe is intrinsically open-ended and indeter- minate, and in continuous creation the Spirit may guide it through the ordinary input of “pure information” that structures and inﬂuences but does not manipulate or overpower what God has made. Amos Yong uses pneumatology to augment Philip Clayton’s theory of emergence in the physical universe. His canonical and pneumatological reading of Genesis’ creation narratives identiﬁes features of God’s creation, diﬀerentiation, and population of the cosmos that conﬁrm the aspects of emergence theory, make more sense as a result, sup- plement its metaphysics, and clarify both the transcendence and the immanence in the God-world relationship — properly and fruitfully framing the dialogue underway between science and Christian theology. Donald G. York and Anna York contend that the agent of Wisdom, Sophia, explains human insight where full evidence is lacking. Paradigm shifts in science and life experience reﬂect the qualities of Wisdom as articulated in Scripture and tradition: evidential knowledge, discernment or judgment, truth or insight, and beneﬁcial results. Michael Welker contrasts the self-referential account of personal spirit in the philosophical stream from Aristotle to Hegel with the other-witnessing Spirit of the biblical tradition. The former is absolute and certain, the latter a context-sensitive and vulnerable truth-revealing power who works our emergence and our sustenance and who inspires our truth-seeking, whether scientiﬁc or interpersonal, as we know and are known in community.

The collection’s discrete contributions are valuable on their own merits but do not ﬁnally cohere, and this seems to reﬂect the state of the larger academic dialogue. Even if readers ﬁ nd some chapters unusually insightful and others less persuasive, the whole collection still attests to the daunting variety within contemporary interdisciplinary pneumatology. The attention to Pentecostalism is less even than the subtitle suggests. Yet, this collection attests to a shift in the dialogue from neglect to description to analysis to critical apprecia- tion. While the academic conversation with distinctly Pentecostal pneumatology still belongs much more to the realm of social science than to natural science or the humanities, it is broadening and deepening, and the many developments in evidence here suggest a fuller future.

Stewardship is more than Mal. 3:10

Stewardship is more than Mal. 3:10 We have just come through a deep recessation and thousands of young adults had to move back in…