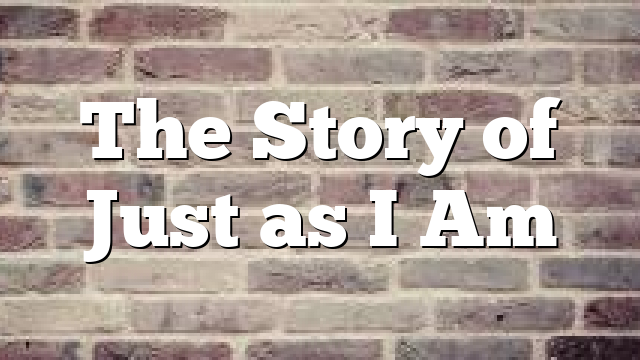 THE STORY BEHIND “JUST AS I AM” HYMN – Michele Norris Melton

[Here is a wonderful, true, and inspiring story! It is well worth the read. Emphasis mine – Ray E Horton]

On this date, September 22, in 1871, an elderly British lady, 82 years young, was ushered into her heavenly reward. Earlier in her life, in 1835, her frustration at being an invalid left her feeling useless and questioning her very salvation. What she did next would echo through history.

Are you at peace with God?

She protested, what could she possibly bring to God? When he replied that she need not bring anything but herself, she gladly accepted Christ

As a young woman, Charlotte Elliot was not sure of her relationship with Christ, not sure of how to be saved, even though she had been raised a minister’s daughter, and the probing question of a Swiss evangelist, “Are you at peace with God?,” would not leave her mind. When she saw the evangelist a few weeks later, she mentioned that she could not shake his question. But, she protested, what could she possibly bring to God? When he replied that she need not bring anything but herself, she gladly accepted Christ.

Some twelve years later, in 1835, crippled by illness and constant fatigue, she felt saddened by her inability to help a local church’s cause. Remembering her conversion, she took out pen and paper and wrote a poem to encourage others who felt perhaps they too had nothing to give. . .

“Just as I Am, without one plea,
But that Thy blood was shed for me,
And that Thou bidst me come to Thee,
Oh, Lamb of God, I come…”

Her poem was published, and she was inundated with requests for it. She was gladdened to discover later that some copies were being sold to raise money for the very cause she felt helpless to assist!

After her death, thousands of letters were found in her home, written by people whose lives had been transformed by her words.

Her song has been translated into hundreds of languages, published in more than 1600 hymnals, and has reached billions around the world, and continues to bring people to Christ even today.

Sixty years later, on this date, in 1931, a 31-year-old man riding in the sidecar of his brother’s motorcycle in England finally came to the end of his internal struggle against whether Christ was indeed the Son of God. He finally knew in his soul that indeed Jesus was just who He said He was! He realized that God calls us to Him “just as we are.”

When C.S. Lewis stepped out of the sidecar, he was a new man, saved by grace!

Ninety-nine years after Charlotte Elliott penned her words, and 3 years after Lewis’ conversion, the 16-year-old son of a dairy farmer listened intently as he heard the message of salvation preached at a revival service in Charlotte, NC. When the song, “Just as I Am,” was sung at the end, young Billy Graham went forward to accept Christ.

Twenty years later, Billy Graham had become a successful evangelist and was invited to speak at Cambridge University in England. His nervousness over the event nearly led him to cancel it. But he was introduced to a kind man named C.S. Lewis who encouraged him to disregard the critics who had spoken out against him, and to continue with the revival.

Rev. Graham went on to speak to an overflow crowd of 2,000 each night of the revival, and when he returned to England in 1989, he addressed a crowd of 80,000 at England’s Wimbley Stadium! As always, he closed the event with the same song that brought him to Christ, “Just as I Am.”

Never think you have “nothing” to bring to Jesus!

Never think you have “nothing” to bring to Jesus! That is exactly what He wants you to bring… nothing! He wants you, just you, as you are! He can take frustration like Charlotte Elliot’s, skepticism like Lewis,’ and nervousness like Billy Graham’s, and reach the world through you!

“Just as I am, though tossed about
with many a conflict, many a doubt,
fightings and fears within, without,
O Lamb of God, I come, I come.”

Are We Worshiping Worship?