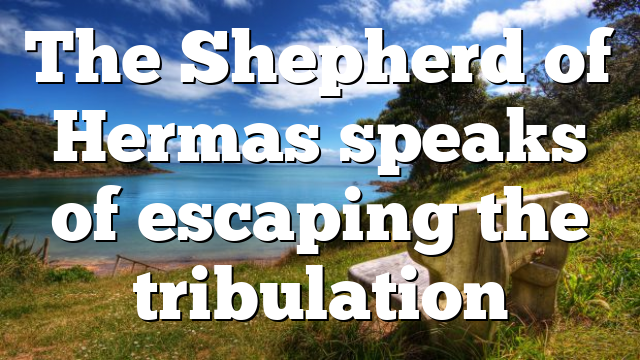 rapture. Here is a summary of that evidence.
THE EARLY CHURCH
Since imminency is considered to be a crucial feature of pretribulationism by
scholars such as John Walvoord,1
it is significant that the Apostolic Fathers, though
posttribulational, at the same time just as clearly taught the pretribulational feature of
imminence. Since it was common in the early church to hold contradictory positions
without even an awareness of inconsistency, it would not be surprising to learn that
their era supports both views. Larry Crutchfield notes, “This belief in the imminent
return of Christ within the context of ongoing persecution has prompted us to broadly
label the views of the earliest fathers, ‘imminent intratribulationism.’”2
Expressions of imminency abound in the Apostolic Fathers. Clement of Rome,
Ignatius of Antioch, The Didache, The Epistle of Barnabas, and The Shepherd of Hermas all
speak of imminency.3
Furthermore, The Shepherd of Hermas speaks of the
pretribulational concept of escaping the tribulation.
You have escaped from great tribulation on account of your faith, and
because you did not doubt in the presence of such a beast. Go, therefore, and
tell the elect of the Lord His mighty deeds, and say to them that this beast is a
type of the great tribulation that is coming. If then ye prepare yourselves,
and repent with all your heart, and turn to the Lord, it will be possible for
you to escape it, if your heart be pure and spotless, and ye spend the rest of
the days of your life in serving the Lord blamelessly.4
Evidence of pretribulationism surfaces during the early medieval period in a sermon
some attribute to Ephraem the Syrian, but more likely the product of one scholars call
Pseudo-Ephraem, entitled Sermon on The Last Times, The Antichrist, and The End of the
World.
5
The sermon was written some time between the fourth and sixth century. The
rapture statement reads as follows:
Why therefore do we not reject every care of earthly actions and prepare
ourselves for the meeting of the Lord Christ, so that he may draw us from
the confusion, which overwhelms all the world? . . . For all the saints and
elect of God are gathered, prior to the tribulation that is to come, and are
taken to the Lord lest they see the confusion that is to overwhelm the world
because of our sins.
This statement evidences a clear belief that all Christians will escape the tribulation
through a gathering to the Lord and is stated early in the sermon. How else can this be
understood other than as pretribulational? The later second coming of Christ to the
earth with the saints is mentioned at the end of the sermon.

FacebookTwitterSubscribe
Subscribe to receive all news to your email or phone: [wysija_form id="1"]
escapinghermasshepherdspeakstheTribulation

Will the antichrist rule America?

Will the antichrist rule America?