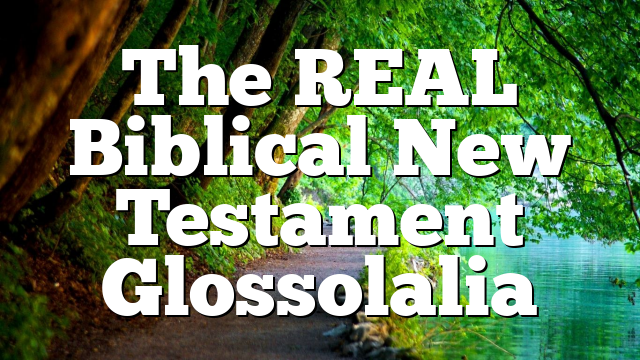 A study complete some 25 yrs.ago at the rise of Apostolic & Prophets moments

The following research on the New Testament phenomenon of glossolalia is much
more than a standard seminary paper or theological essay. Its topic and purpose were
inspired by years of personal study and experience of the person of the Holy Spirit and
the Pentecostal baptism accompanied with speaking of other tongues. This research took
place between 1990 and 1996, as I began a personal exploration of the topic from a
theological viewpoint with in-depth study of the Biblical text. The first draft was written
in 1997. The study was then evaluated and completed in 2000.

As early as 2 AD, Tertullian writes of
the practice of spiritual gifts, including the gift of speaking in tongues, being manifested.
Encyclopedia Britannica states that glossolalia recurs in Christian revivals of every age.
It will be then proper to suggest, that true revival in the Church of the 21st Century would
only come when Christianity returns and reclaims the primitivism of the Early Church
including its primitive but powerful glossolalic experience. Glossolalia, however, does not occur in a vacuum. It is a characteristic of a change and transformation of ecclesiastical religiosity to a personal experience. Glossolalia almost always occurs among people who seem to be economically unable,
politically oppressed or even persecuted, and often culturally displaced by society. As Harvey Cox precisely points out, in such a context “glossolalia is a mystical-experiential protest against the existing religious language.”

FAKE NEWS: We can thank Donald Trump for popularizing this term. It was a stroke of genius on his part. In doing so he…