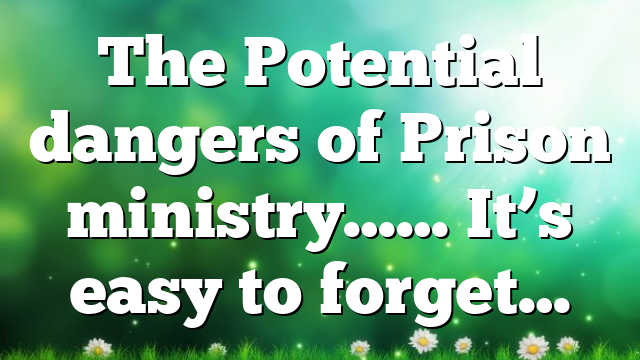 The Potential dangers of Prison ministry……
It’s easy to forget where you’re at in a Prison when you’ve been there for so long and never seen what the environment can quickly turn into being.

However , yesterday it happened, 6 men were found passed out on the yard or in their dorm from smoking that K-2 mess, then fights began breaking out in several dorms and yards, A guard was attacked, I heard.

It got to the point where the head of programs came in my office and ask me to leave, all this was before 10:00 am.

He said with what ‘s going on so fast and so much ,so early, it would be best if I leave. In the 17 years I been doing Prison ministry this was the first I seen anything like this.

The green clothes camp across the road from where I am at, had some inmates attack another inmate beating him with a lock in a sock, it sent him to the hospital where it nearly knocked the mans eye out and they may need to do surgery to fix it. I go to that prison as well walking the yard and talking with the inmates.

Again, it’s easy to forget just how dangerous that environment can become, quickly.

While several inmates tell me not to worry because they got my back, I would still appreciate your prayers.

Leonard J Ransil: On the website below is a rebuttal by Carol Swain entitled Mark Galli’s Unchristian Attack on President Trump from an Evangelical…