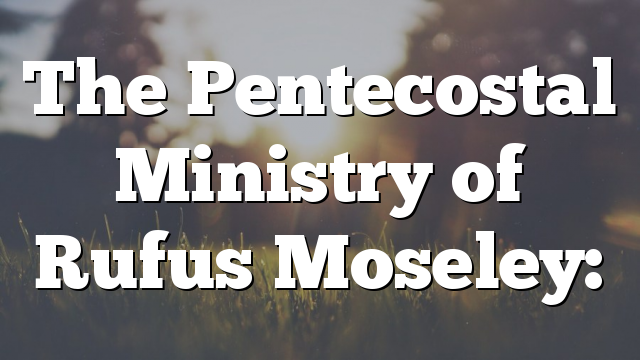 One of the most significant and also most ignored precursors of the modern Charismatic movement was Rufus Moseley, a humble Spirit-filled pecan farmer from Macon, Georgia.[1] His example and ministry brought the Pentecostal perspective to many churches, pastors and most importantly professor Glen Clark’s Camps Furthest Out (CFO) in the 1950s. In turn, this para-church group became the “schoolhouse” of the Charismatic Movement in the 1960s.[2]

Moseley was born (1870) into a devoutly Christian farming family in the mountain town of Elkin, North Carolina. His father had a reputation for absolute integrity and kindness in all his dealings. Rufus recounted:

When he offered for sale, or in trade, a horse or a mule, he first told its faults to the full. When he took a load of watermelons to sell, he sought to have the larger ones at the bottom instead of the top.[3]

Rufus was a good student, but his family could not afford to send him to secondary school, so he read his way through the secondary school curriculum. Through great sacrifice by his parents, Rufus was able to able to attend the first year of college – he missed a scholarship for that year because his hand writing was terrible. But thereafter, his brilliance allowed him to gain one scholarship after another. At Peabody College in Nashville he fell in love with philosophy, especially the idealist philosophers. “Plato so gripped me that I completely forgot my body. For the first time in my life I was lost in pure intellectual delight.”[4]

But at Peabody he also became a born again believer. In his second year a visiting evangelist from Texas came to preach at a nearby church.

When the evangelist made the altar call it seemed that I stood in jeopardy if I did not respond. . Some of my college teachers and many of my student friends were present.  Their presence made it all the more difficult to take on the cross by acknowledging my need to yield to the Spirit and follow Jesus.[5]

The following night he returned and went to the altar again, this time for a prayer of total dedication to the Lord.

After graduating from Peabody, Moseley went on to graduate studies at the University of Chicago, Heidelburg, in Germany, and finally to Harvard University. At Harvard he studied under William James while the renowned philosopher-psychologist was preparing the Varieties of Religious Experience. As with professor Clark, James introduced Moseley to New Thought and Christian Science. After his formal studies (1898) he accepted a teaching position at the Baptist, Mercer College, in Macon, Georgia.  There he became a much beloved teacher.

But as he read the literature of Christian Science and New Though his understanding about spiritual healing came into conflict with the solidly cessationist Baptist doctrine at Mercer. It came to a crisis of conscience. Moseley felt, like his father who could not hide the smaller watermelons, that he could not hide his attraction to Christian Science. He felt especially drawn to it because it was the first form of Christianity he had seen that offered demonstration for its doctrine in the form of real healings, and because it was an idealist based theology, like his beloved Plato. He felt he had to resign. Moseley later recounted:

One of the most difficult ordeals that I ever faced was to go before the Board of Trustees of a Southern Baptist college [Mercer] and let them know that I was a big enough fool, in their estimation, to feel there might be something in Christian Science, and to resign my position and go see if there was. For I felt I can’t afford to bring this thing into the college until I know about it and I can’t know about it unless I find out (that is, enter into the movement and experiment with it). And if there is a ray of hope here (in Christian Science), what is conventional success in comparison with finding out the truth.[6]

Here we can see the tragedy of cessionism at work. The wonderful Christians at Mercer who Moseley loved had orthodox Christology and belief in the Bible, but were severely injured in their understanding of the Church. That is, under cessationist theology, the Church could do no healings. On the other hand, Christian Science had heretical Christology, but it knew that the Church did heal in the present day.

He earned a living by tending a ten-acre pecan grove. After World War I (1918) he also received a small income from his columns in the Macon Daily Telegraph. He focused his ministry on the poor, sick, imprisoned and condemned prisoners. Moseley became an activist against capital punishment and had success in having some death sentences commuted. He also preached racial tolerance and reconciliation. On one occasion in the 1920s he personally confronted a lynch mob and stopped the murder.[7]

The year after he cut ties to Christian Science he felt the presence of the Holy Spirit increasing in his life. By 1910 there were several Pentecostal churches in Macon. Visiting one, Moseley was told by its minister:

“You will have to become more orthodox before God will baptize you [in the Spirit].” I replied, “The promise is not to the orthodox, but those who hunger and thirst and ask.”[8]

By March of 1910 he was seeking for the fullness of the baptism of the Spirit with single mindedness. One night, he was awakened early in the morning by the Lord. This began a profound experience of Jesus and his ascended glory. His experience with Christ resembled that of the famous 19th Century revivalist, Charles Finney, had with Jesus at the beginning of his Christian life.[9] Moseley recalls:

I became aware of a glorious Presence standing immediately before me in the tangible form of a man, imparting the sense of barely concealed powers and immense sanctity. He made Himself known as Jesus and infused Himself within me. …I fell upon my face at His feet, as one dead and yet more alive than I dreamed it possible ever to be. I knew at once that He was in me and I in Him, and the Father was in Him and He in the Father.[10]

This experience was so profound, resulting in such unalloyed joy and exuberance, that his family committed him to the local mental hospital to have him checked out. It took him a week to convince the staff he was not crazy – or at least not dangerous. After his experience with the Lord he began manifesting the Gifts of the Holy Spirit, including a strengthened ability to witness to others, healing, and proclaiming the Gospel.  He knew of tongues, but resisted that gift for eight months.

Though never an ordained minister, Moseley was teacher and spiritual director to many, including Tommy Tyson, the charismatic evangelist of the Methodist Church and perennial CFO speaker.[11]  Most importantly, he was an itinerant witness to the power of the Holy Spirit. Moseley particularly influenced two other para-church organizations besides the CFO: E. Stanley Jones’ Christian Ashram Movement, Dr. Albert E. Day’s Disciplined Order of Christ.

Mosleye and Professor Clark became close friends, and Moseley regularly spoke at CFO camps – there he was known for his rumpled suit, and absolutely wonderful talks and ministry. Prof. Clark called Moseley’s book, Perfect Everything, “the greatest book on the Holy Spirit ever written.”[12] Wherever Moseley witnessed or taught, some in his audience received the Gifts of the Spirit.  Many others were prepared for the idea of a personal Pentecostal experience, and when the charismatic renewal began in the 1960s, were able to accept it.

[1] Moseley’s major work, which is an autobiographical narrative of his spiritual pilgrimage, is: Manifest Victory, Rev. ed. (New York: Harper & Brothers, 1947), 1st ed. 1941. Like many who have had profound spiritual experiences, he found difficulty in expressing what the Lord had taught him about the spiritual world.  He attempted to put the same insights in simpler language in a later work, Perfect Everything, (St. Paul: Macalester Park, 1949).  Moseley’s tremendous influence on the CFO and other groups such as the E. Stanley Jones’ Christian Ashrams and Albert E. Day’s Disciplined Order of Christ was first pointed out to me by the late Rev. Tommy Tyson, in an interview in November 18, 1984.Wayne McLain, a disciple of Moseley, published a Moseley anthology: A Heavenly View: The Best of Rufus Moseley (Shakopee, MN: Macalester Park, 1993), and a biography, A Resurrection Encounter: The Rufus Moseley Story (Minneapolis: Macalester Park:, 1997). Some of Moseley’s CFO talks can be accessed here:

[11] On the importance of the Rev. Tyson as the leading figure of the charismatic renewal see: Michael T. Girolimon, “The Charismatic “Wiggle,” United Methodism’s Twentieth-Century Neo-Pentecostal Impulses,” Pneuma, 17 #1 (spring 1995), 90-91.

[12] Quoted from the back cover to the paper back edition of Perfect Everything, (St. Paul: Macalester Park, 1968).

Pray for St. Louis. The legitimate peaceful demonstrations have been hijacked by well coordinated Leftist groups who ultimately wish revolution and destruction. Pray a…