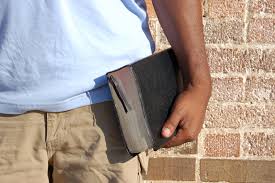 The outward evidence of salvation to all men is a life of righteousness and true holiness. True salvation does not desire to mimic the word or indulge in worldly passions. True salvation desires “a life of righteousness and true holiness.” Sadly, today we see leaders who have accepted activities as normal for “Christians” which the scripture forbids.
These activities are not only acceptable to some leaders, but are taught as permissible and promoted in church. In fact, these leaders will deride you publicly for taking a stance for purity by claiming you are living under the law and thus placing people in bondage by calling for true holiness.

Just as bad are the leaders of leaders who have not taken a stand. These remove themselves from the conflict so as to hold on to their positions of authority. This is nothing short of trusting in a position or money rather than God. It is condoning sinfulness for the purpose of maintaining public standing.

God bring us back to this kind of love and passion for you.

CT is killing us with conspiracies nowadays