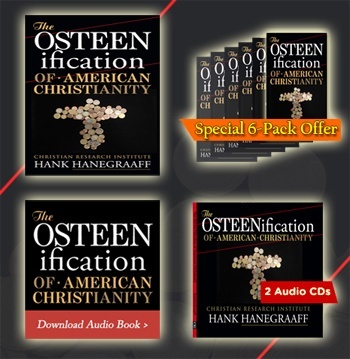 Troy Day [02/25/2016 5:12 AM]
It’s an article by the book author. He has been well known for debunking the 1999 Millennial bug and the DaVinci code books. Here’s another review of the Osteenification book by Hank Hanegraaff and the Christian Research Institute in Charlotte http://chalcedon.edu/research/articles/the-osteenification-of-american-christianity-review/

“As such, he is committed to the notion that faith is a force, that words are the containers of the force, and that through the force of faith people create their own realities.”

This, along with other statements throughout the article, sounds similar to the Open-Theist, view. The Open- Theist, does not believe that God, is capable of having a plan, or even a thought, beyond this very moment. Therefore, God requires, the prayers, so that she can make her decisions.

The Open – Theist, does not live, by the plan God has made. Because, there god it’s too pathetic to be able to make a plan. Rather, just as Olsteen, teaches, humans make their own plans.

So, does this mean that Osteen is an Open-Theistic Mystic?

Troy Day [02/25/2016 5:23 AM]
Osteen is fond of tweaking Scripture—a little twist here, a little turn there, until the Bible says what he wants it to say. For instance, in the story of Zechariah, father of John the Baptist, in Luke 1—as presented by Osteen on television, May 3, 2004 (p. 14, note 33)—God took away Zechariah’s power of speech not as a sign, but “because God knew that Zechariah’s negative confessions—Are you really sure this is going to happen? Do you see how old we are? I just don’t think this would be possible—would stop His plan … He knew that Zechariah’s negative words would cancel out His plan” (p. 14). To arrive at that arrantly anti-Biblical conclusion, all Osteen had to do was skip over those verses (Luke 1:6, 13, 18, 20) that make it clear that God will give a son to Zechariah, that this will indeed happen, and that, as a sign, Zechariah will lose the ability to speak until it does happen. Hanegraaff calls this technique of Osteen’s “scriptorture” (p. 13)

I have never, watched Olsteen all the way through. My spirit man was not comfortable, when I tried.

This idea, about Zachariah’s words, being powerful enough to stop God’s plan, is odd. This actually, lines up with, Kenneth Hagin, Kenneth Copeland, Mike Murdock , John ( a Spanish name that I don’t know how to pronounce or spell), Myles Munroe, and others that I have heard on TBN, and Daystar television.

These public speakers, like to talk about the power of the human word. Instead of, explaining the power of God’s Word.

FacebookTwitterSubscribe
Subscribe to receive all news to your email or phone: [wysija_form id="1"]
Pages: 1 2 3
americanchristianityosteenification