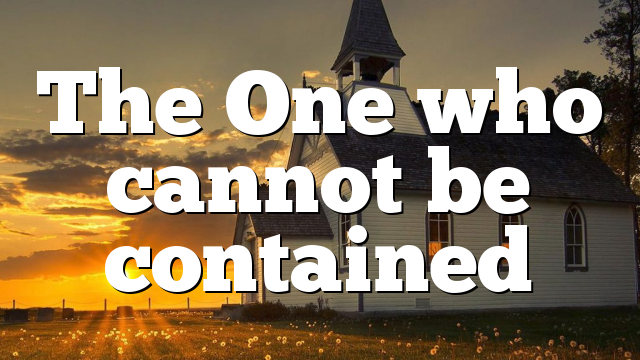 The One who cannot be contained in Solomon’s temple (much less the expanding universe) is contained in the womb of a Middle Eastern teenager.

The One who is timeless and omnipotent and changeless makes himself vulnerable and contingent to all the natural forces he has breathed into existence as he lays in a feed box, dependent on Mary and Joseph for nourishment and protection, as he somehow as God holds together the wood of that manger that cradles him in Bethlehem.

The One who is the origin of all things and who holds all things in existence—galactic to microscopic—is the carpenter from Nazareth. He who made the Pleiades and Orion now sets beams and crafts tables with his stepfather, sweeps sawdust from his forearms.

The One who baptizes with the Holy Spirit and fire is baptized with water to draw close to his every imperfect human brother and sister, to identify with our brokenness, so that humanity has a baptized God.

The One who does not eat the flesh of bulls or drink the blood of goats is now in Jesus a hungering creature of necessity, set to fast in the Judean desert.

The One who owns the cattle on a thousand hills and Lord of angel armies is now homeless and a sojourner, cloaked against the cold night air and all alone, tempted by satan.

The One who never sleeps and who ever watches over Israel naps on a boat on Galilee.

The One who embodies the Law dines with tax collectors, prostitutes, and wine enthusiasts.

The One who is a consuming fire of holy otherness beyond all comprehension, who dwells in light inaccessible from before time and forever, embraces lepers, the blind, and all who are ritually unclean; he shines on all who sit in darkness and the shadow of death.

The only One who is without sin forgives and does not condemn as he draws in the sand, throws no stones, and takes all condemnation upon himself.

The eternal One hangs on a tree as the sands of his mortal life seep from the hourglass until “it is finished.”

These and other sentences like them are what we mean when we confess that the Word became flesh.

The Gospel has a definitive content. The contemporary church (across all denominations and movements) may have misplaced this bright light, or forgotten about it altogether, but it shines on in the darkness and the darkness can never extinguish it.

All the blessings for a holy and bright Christmas…all the way to January 6!

Can sinners at the rapture be saved and be a natural inhabitant of the earth?

Can sinners at the rapture be saved and be a natural inhabitant of the earth? (Finis J. Dake)