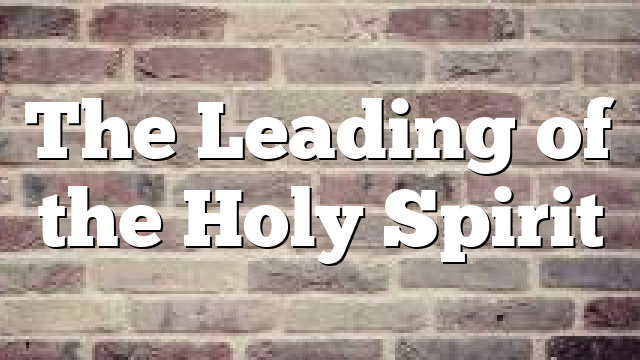 The narrative in the book of Acts of Paul being prevented by the Holy spirit from preaching in Asia has some good lessons for us.

“They went through the region of Phrygia and Galatia and were forbidden by the Holy Spirit to speak the word in Asia. When they came near Mysia, they tried to go into Bithynia, but the Spirit did not allow them” (Acts 16:6-7).

Let the Lord change your plans

If the Lord is leading otherwise, let us not cling to our plans, as good as they may seem. God sees things that we do not

We may sense a call on our lives, and plan accordingly. But we must be flexible. Sometimes, the Lord may have something different for us to do for a season.

Look at verses 8-9 that follow: “So they passed by Mysia and went down to Troas. During the night a vision appeared to Paul: A man of Macedonia stood and pleaded with him, saying, ‘Come over to Macedonia and help us.’ After he had seen the vision, immediately we sought to go into Macedonia, concluding that the Lord had called us to preach the gospel to them.”

Paul didn’t push against the will of the Holy Spirit. He could have, but it would not have been effective. Instead, he moved on, and in so doing (trusting the Lord), He received a night vision, and “immediately” obeyed, and experienced much fruit in Macedonia, preaching to the Philippians and the Thessalonians there.

Move on with the Lord

If the Lord is leading otherwise, let us not cling to our plans, as good as they may seem. God sees things that we don’t. If He closes a door, it is important to move on elsewhere with the Lord, even if we don’t quite know where. He will then be able to lead us and guide us, even supernaturally, to situations where we will bear the most fruit.

And when He shows us, let us be quick to take up the new assignment, like Paul, who “immediately” sought to go to Macedonia, where the Lord used him mightily. Notice it says that he “sought” to go. When we choose to obey, He will make the way.