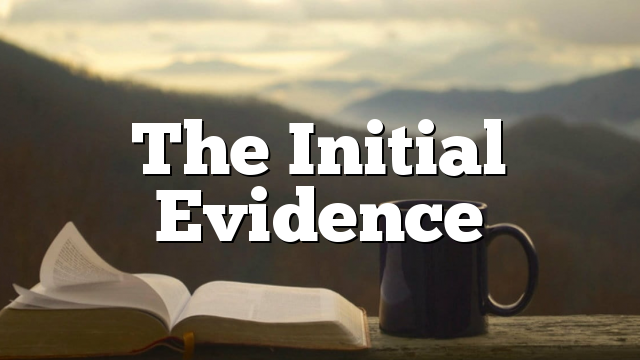 The Day of Pentecost
The Book of Acts records five instances where people were baptized in the Holy Spirit. On the Day of Pentecost, “They were all filled with the Holy Ghost, and began to speak with other tongues, as the Spirit gave them utterance” (Acts 2:4).

Notice that when they were filled with the Holy Ghost, they spoke with other tongues. If that had happened just once, we might think it was related only to when He first came. But this phenomenon didn’t happen just once.

Philip and the Samaritans
In Acts chapter 8, Philip the evangelist went to the city of Samaria and preached Christ. When the apostles heard that the Samaritans had received the Word of God, Peter and John went to Samaria and prayed that they would receive the Holy Spirit.

ACTS 8:17
17 Then laid they their hands on them, and they received the Holy Ghost.

Someone might say, “Well, it doesn’t say that the Samaritans spoke with tongues. That must mean a person can receive the infilling of the Holy Spirit without speaking with tongues.”

If you read on in chapter 8, you’ll learn something very significant about a fellow named Simon. Once called “Simon the sorcerer,” Simon had supposedly come to believe in Jesus under Philip’s ministry in Samaria. Let’s find out what happened next.

ACTS 8:18–19
18 And when Simon saw that through laying on of the apostles’ hands the Holy Ghost was given, he offered them money.
19 Saying, Give me also this power, that on whomsoever I lay hands, he may receive the Holy Ghost.

Saul of Tarsus
Let’s look in Acts chapter 9 at what happened to Saul of Tarsus, soon to be called Paul, when he was saved and later in a separate experience received the Holy Spirit.

Saul was approaching the city of Damascus carrying letters that gave him the authority to imprison Christians. Suddenly a bright light shone around him, and he fell to the earth, blinded by that light.

In a vision, Saul saw Jesus, and he changed immediately. He was born again. He confessed with his mouth that Jesus is Lord, and he certainly believed that God raised Jesus from the dead. After all, Saul was talking to a resurrected Jesus Christ.

Then in Acts 9:6 Saul asked, “Lord, what wilt thou have me to do?” Jesus answered, “Arise, and go into the city, and it shall be told thee what thou must do.” After Saul arrived in Damascus, Ananias came to the house where Saul was staying.

ACTS 9:17–18
17 And Ananias went his way, and entered into the house; and putting his hands on him said, Brother Saul, the Lord, even Jesus, that appeared unto thee in the way as thou camest, hath sent me, that thou mightiest receive thy sight, and be filled with the Holy Ghost.
18 And immediately there fell from his eyes as it had been scales: and he received sight forthwith, and arose, and was baptized.

Notice this passage doesn’t say anything about Paul speaking with tongues. Yet later we read where Paul said, “I thank my God, I speak with tongues more than ye all” (1 Cor. 14:18).

When do you suppose Paul began speaking with tongues? The most logical conclusion is that Paul started speaking in tongues when he was filled with the Holy Ghost!

Cornelius and His Household
Ten years after the Day of Pentecost, the household of Cornelius, a devout Roman centurion, was saved and filled with the Holy Spirit.

Cornelius was praying when an angel appeared to him and told him to send someone to Joppa to inquire at the house of Simon the tanner for a man named Peter. Meanwhile in Joppa, during a time of prayer, Peter fell into a trance and had a vision.

While Peter pondered the meaning of the vision, the Holy Spirit spoke to him, saying that three men had come to see him and he was to go with them. Peter and several Jewish brethren left with the men for Cornelius’ house. When they arrived, Peter preached the Gospel to Cornelius and his entire household.

ACTS 10:44
44 While Peter yet spake these words, the Holy Ghost fell on all them which heard the word.

The believing Jews were astonished that the Holy Spirit had been poured out on the Gentiles. Up to that moment, the church had been strictly Jewish. These Jewish believers thought no one could get in on this New Covenant except the Jews.

What convinced the Jewish brethren who were present that the door of salvation had been opened to the Gentiles? Verse 46 tells us, “They heard them speak with tongues, and magnify God.”

The Disciples at Ephesus
The last recorded instance where folks received the Holy Spirit is found in Acts chapter 19. This incident in the city of Ephesus happened about 20 years after the Day of Pentecost.

When the Apostle Paul arrived in Ephesus, he met some disciples. He asked them, “Have ye received the Holy Ghost since ye believed?” (Acts 19:2). These believers didn’t know there was a Holy Spirit until they met Paul.

ACTS 19:6
6 And when Paul had laid his hands upon them, the Holy Ghost came on them; and they spake with tongues, and prophesied.

In three of the five recorded instances in Acts where people received the Holy Ghost, the Bible definitely states they spoke with other tongues. The majority of evidence would be on the side of tongues as the initial evidence of this experience. As for the other two instances, the Bible infers that the believers spoke with tongues.

I believe it’s safe to say we have proven that five times out of five recorded instances in the Book of Acts, believers who were filled with the Holy Ghost experienced the initial evidence of speaking with other tongues. This would lead us to believe that any person today who desires to be filled with the Holy Ghost will speak with other tongues as well.