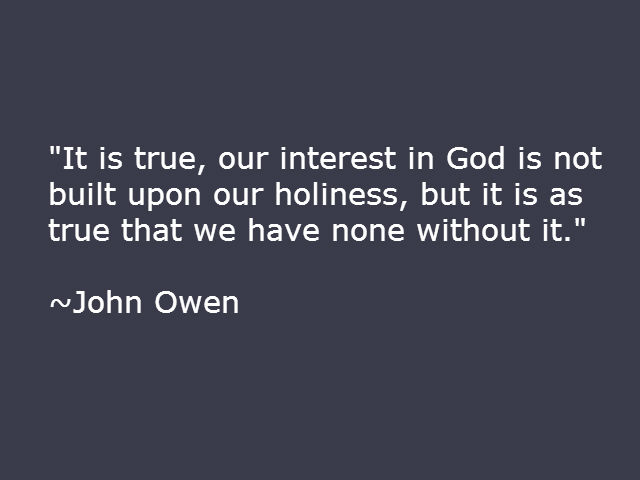 [Holiness: The state of continual sanctification, the life of purity and detachment from the world and its lusts.] “Make every effort to live in peace with everyone and TO BE HOLY; WITHOUT HOLINESS NO ONE WILL SEE THE LORD.” (Heb. 12:14) [Moses tells us: God created man IN HIS OWN IMAGE; that is, God was the model according to how He formed us in the spirit of our mind. Paul says: that they should put on the new man, which after God is created in righteousness and TRUE HOLINESS!] “You were taught, with regard to your former way of life, to PUT OFF YOUR OLD SELF, which is being corrupted by its deceitful desires; to be made new in the attitude of your minds; and to PUT ON THE NEW SELF, created to be like God IN TRUE RIGHTEOUSNESS AND HOLINESS.” (Eph. 4:22-24) [I think more clearly that Holiness is consecration, purity, hallowed or sacred!] “…just as he who called you is holy, so BE HOLY IN ALL YOU DO; for it is written: “BE HOLY, BECAUSE I AM HOLY.” (1 Pet. 1:15-16) [This is the way our Abba Father pronounces this command!] “Consecrate [sanctify] yourselves and be holy, because I am the LORD your God.” (Lev. 20:7) [This has been the will of our Abba Father from the very beginning!] “Praise be to the God and Father of our Lord Jesus Christ, who has blessed us in the heavenly realms with every spiritual blessing in Christ. For he chose us in him before the creation of the world TO BE HOLY AND BLAMELESS IN HIS SIGHT. In love he predestined us for adoption to sonship through Jesus Christ, in accordance with his pleasure and will…” (Eph. 1:3-5) [Paul prays for us to have wisdom and revelation so we may know what our Abba Father really expects from us!] “For this reason, ever since I heard about your faith in the Lord Jesus and your love for all God’s people, I have not stopped giving thanks for you, remembering you in my prayers. I keep asking that the God of our Lord Jesus Christ, the glorious Father, MAY GIVE YOU THE SPIRIT OF WISDOM AND REVELATION, so that you may know him better.” (Eph. 1:15-17)

Be blessed as you praise The Lord, knowing that GOD HAS GIVEN US THE SPIRIT OF WISDOM AND REVELATION, SO THAT WE MAY KNOW HIM BETTER!
-Bill Stockham

Pentecostal Theology [06/04/2015 4:48 PM]
Would very much like do point out the importance of this topic. I think it was Christopher Hart who was looking for a good discussion on the doctrine of holiness – “Don’t live/lave life without it”

Pentecostal Theology [06/06/2015 5:57 PM]
Sanctification is a serious topic and w do hope it is taken serious in this discussion as well thou some denominations do not recognize sanctification as 2nd work of grace…

John Kissinger [06/06/2015 6:30 PM]
John Wesley, the founder of the Methodist movement, taught that there were two distinct phases in the Christian experience. During the first phase, conversion, the believer received forgiveness and became a Christian. During the second phase, sanctification, the believer was purified and made holy. Wesley taught both that sanctification could be an instantaneous experience, and that it could be a gradual process. After Wesley’s death, mainstream Methodism “emphasized sanctification or holiness as the goal of the Christian life”,[5] something that “may be received in this life both gradually and instantaneously, and should be sought earnestly by every child of God.”

The Holiness Movement emerged in the 1860s in the USA with the desire to re-emphasize Wesley’s sanctification doctrine. Holiness preachers taught that sanctification was an instantaneous experience. Later, the Pentecostal Movement emerged from the Holiness Movement, teaching that the believer could, in addition to becoming sanctified, receive power from God and the Gifts of the Holy Spirit. In early Pentecostal thought this was sometimes considered to be a third work of grace.

Pentecostal Theology [06/08/2015 7:02 PM]
The idea of sanctification (the process of becoming holy or being transformed into holiness, or eliminating intentional sin) as a work of the Spirit was first propagated by John Wesley in the mid to late 1700?s. “Wesley held that, in this life, Christians could come to a state in which the love of God, or perfection, reigned supreme in their heart.” Wesley held that this was an additional work of the Spirit secondary to the salvation experience. It was coined the “second work of grace.” This view remained prominent throughout Christianity until the early 1900’s. In retrospect, any theology that does not recognize sanctification as the second work of grace is essentially non-Wesleyan.

A MOTION for a PENTECOSTAL EMOTION

A MOTION for a PENTECOSTAL EMOTION If there was a New Bapticostal Edition [NuBE] of the Bible, Acts 2 would have read like this:…