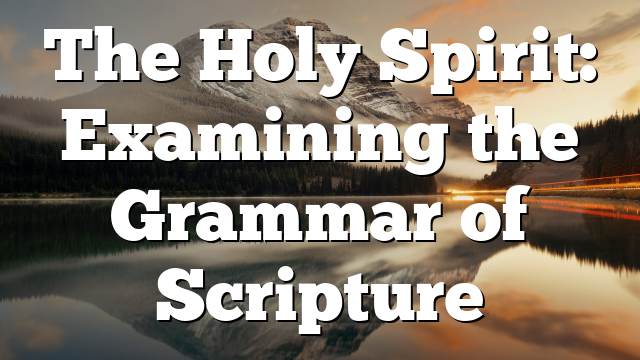 While I have argued that there is no trend to feminize God in the Church of God, there has been controversy over the way scripture uses the language of spirit, especially in reference to the Holy Spirit. There is confusion over how the language for the Spirit functions vs language used for God. One might claim scripture uses masculine pronouns for God, but this claim is false when it comes to references to the Spirit. For this reason, I want to address how scripture employs the various terms for the Spirit and how we should understand the grammar.

New Testament writers like John and Paul are keen to demonstrate the full personhood of the Spirit. This is where Greek grammar does not help because, technically, neuter pronouns should accompany neuter verbs. We see Paul doing this in Romans 8.

Romans 8:26: “But the Spirit [itself] (alla auto to pneuma) intercedes.” Paul employs a neuter pronoun for grammatical consistency. You can see this in the KJV, which renders the Greek “but the Spirit itself maketh intercession.”

At the same time, Paul attributes personhood to the Spirit as a way of ruling out one obvious implication of the neuter. The Spirit intercedes. Paul goes along with Greek grammar but uses the syntax to make sure that his readers know that a neuter noun + a neuter pronoun does not mean that the Spirit is an impersonal force like a wind or breath (other possible meanings of pneuma).

This reminds us that grammatical gender is not determinative of the identity of the Spirit and that Paul can employ a grammatically neuter pronoun to refer to the Spirit. It is simply false to claim that scripture only uses masculine pronouns in reference to the Spirit.

Second, the use of masculine pronouns for the Spirit in the Gospel of John is John’s way of ensuring the full personhood of the Spirit.

There are at least three important reasons. The Gospel of John is the only NT book that uses paraklētos, a masculine noun in reference to the Spirit. The use of masculine pronouns is in connection to this masculine noun. We can see this in John 14:26.

John 14:26: “But the Helper (ho de paraklētos), the Holy Spirit (to pneuma), whom the Father will send in My name, He will teach you (ekeinos didaskei) all things.”

The use of the masculine noun is not the only reason. John also uses the masculine pronoun to reinforce the personhood of the Spirit and to show the close relationship to the Son.

Some have inferred too much from John’s use of masculine pronouns for the Spirit. They make a general claim that what John does applies to all NT writers but we have seen that this is not the case. Paul uses a neuter pronoun.

John’s use of masculine pronouns demonstrates the full personhood of the Spirit, the close relationship between the Incarnate Son and the Spirit, and the connection to the Spirit as paraklētos. It is too much to infer masculine grammar means more than this.

Third, the Old Testament uses the Hebrew term ruach in reference to the Spirit.

The term ruach occurs 378 times in the Old Testament and 11 times in the Aramaic of the book of Daniel. If you take a deep dive into Hebrew grammar, you will see that in a small number of instances, ruach is used in a masculine sense. This is almost exclusively in contexts where ruach means “wind” (e.g., Ex. 10:13-19; Num. 11:31; Jer. 4:12; Ezek. 27:26), the human spirit (Ps. 51:12), or an unknown spirit (Job 4:15). You would have to go back to a German article written by Karl Albrecht in 1896 to find the initial discussion of why ruach (and other Hebrew terms) seem to be able to be used for masculine or feminine.

Is Mounce trying to deceive people by claiming that ruach is feminine? Not at all. It’s a standard convention to do so. Scholars are still wrestling with why the grammatical change in gender in specific instances. Still, the normal use of ruach is feminine. The technical point about masculine use does not alter that fact.

I find it interesting that some who raise these masculine uses of ruach don’t ask basic questions: why is it that this extremely important noun can move between genders in Hebrew? And, if it can be used in masculine ways, why is it feminine in the contexts where the Spirit of God is being referenced? I raise this only to say that it’s overly simplistic to claim that because there are some masculine uses of ruach, somehow people who say it’s feminine are incorrect or that this is some kind of game changer. It’s not.

It’s also the case that feminine grammar is, at times, paired with feminine metaphors. The use of the feminine form of ruach in Gen. 1:2 (“and the Spirit of God was hovering over the surface of the waters”) to point to the Spirit “hovering” may invoke the parallel passage in Deut. 32:11 in which an eagle “hovers” over its young. The passage in Deuteronomy likens God to an eagle. It’s intended as a metaphor or a poetic way of telling Israel that God has nourished and cared for Israel in the wilderness.

A conservative evangelical scholar like Allen Ross who taught at Dallas Theological Seminary has said that the image of the Spirit is likened to a mother bird hovering over its nest. While this is a disputed interpretation, Ross is an inerrantist and he is happy to make the claim.

So, we have an example of ruach in the feminine with the potential use of a feminine metaphor. Does this mean that the Spirit is feminine? No. Not any more than the neuter noun or pronouns in reference to the Spirit mean the Spirit is impersonal. Still, we cannot simply ignore the grammar or even feminine metaphors. Instead, we must understand them correctly.

Fourth, the language for Spirit in scripture points toward the personhood of the Spirit who becomes intimately involved in creation and salvation.

I argued against a hyper-masculine view of God in a previous post. I find this hyper-masculine view of God behind claims that masculine grammatical forms mean more than feminine or neuter forms. It is perfectly valid to claim that the grammatically feminine form of ruach says nothing about the being of God. I would agree. In fact, that’s what the Christian tradition has consistently said (as I pointed out here).

The problem is that some writers go on to claim that when it comes to masculine grammar and pronouns there is something more mysterious going on. For some reason, masculine grammar points to something masculine in God while feminine grammar or neuter grammar does not. There is nothing consistent about that argument. To make such a claim is to begin to move toward saying God is masculine, which is borderline heresy.

We need to go a little deeper. All grammar is a human convention. God co-opts human language to describe himself. To claim that masculine grammar bears some implication for God’s being that feminine grammar does not is contrary to scripture. It’s deeply unbiblical.

The use of masculine, feminine, and neuter terms for God across the entirety of scripture serves to remind us that God is beyond gender. It’s God's way of saying what he clearly says in Numbers 23:19 (“God is not a man”) or Hosea 11:9 (“For I am God and not man, the Holy One in your midst”).

This does not mean that the Spirit is female. God is using language to describe specific qualities just like Isaiah says that God is like a mother. It underscores the Spirit as the divine breath who creates and renews, sustains, upholds, nourishes, empowers, and purifies. In this sense, feminine imagery goes along with the imagery of fire or water. We should never be afraid of feminine metaphors and grammar. Nor should we try to explain them away or legislate them out of existence. They are biblical. We need to understand what they are and are not saying.

Finally, the purpose of grammatical gender in scripture is to point to the transcendent God who exists in the holy love of Father, Son, and Holy Spirit

Before the fall, we see that humanity images God as male and female. There is equality, complementarity, and mutuality. The image is conveyed in the biological reality of two genders. One of the crucial biblical truths of two (and only two) genders is that the image comes through most clearly in the mutual harmony and equality of both.

After the fall, we see the breakdown in God’s shalom. The complementarity and mutual harmony of male and female become stained with division, control, and abuse. By the time you get to Genesis 11, you have witnessed the reversal of creation from shalom to chaos and waste.

One of the points of scripture deploying masculine, feminine, and neuter grammatical constructions and metaphors for God is to point toward the end of things in the Father, Son, and Holy Spirit. All of creation—the personal (men and women) and the impersonal (trees, plants, etc.)—will be taken up into a final harmony, which points toward the triune dance. The Father, Son, and Holy Spirit move in a dance of equality, complementarity, and mutuality. This is holy love. It is God’s way of pointing us beyond the sinfulness of a life in which people constantly try to dominate and control out of fear.

The depth of the biblical vision of grammar is to lift our eyes above the division and domination into the divine shalom of the end of all things. This is where masculinity and femininity find their ultimate purpose. It’s not, ultimately, about sexuality; rather, sexuality finds its purpose in relationality. These biological realities point beyond themselves to the inner harmony of God’s own life. We will miss this wonderful and crucial truth if we hyper-masculinize God. By doing so, we are merely playing into the division and domination of fallen life.

What conclusions should we draw from this quick survey of the language for the Spirit in scripture?

Our language about God should be faithful to the biblical witness. This does not mean that we must use the exact same terms that scripture uses. It is perfectly acceptable to invent terms like Trinity if they faithfully reflect what is in the scriptures. The key is a faithful reflection of scripture.

It seems to me that we can make an argument that masculine terms and pronouns are the normal way scripture talks about God but not the normative way. I use masculine pronouns when I talk about God because I am following this normal usage in scripture. But, it’s not biblical to make the stronger claim that it’s normative. This is precisely what item #20 on the GA agenda tries to do. It’s a form of fence around the grammar of scripture.

It certainly is not biblical to claim that masculine language means God is masculine. This is really the point that some Pentecostal scholars have tried to make. I have tried to show how the language in scripture for the Spirit follows this basic trend.

It also misses the crucial point that human grammar, with its gendered constructions, is taken up into a larger vision of the triune God who transcends masculine, feminine, and neuter. We see in the use of masculine, feminine, and neuter constructions that the final purpose of our biological sex is a community of equality, complementarity, and mutuality with all of creation.

As the spirit gives the utterance

I have a question and I am very serious.I know tongues is real.What I am asking is it possible for anyone to just start…