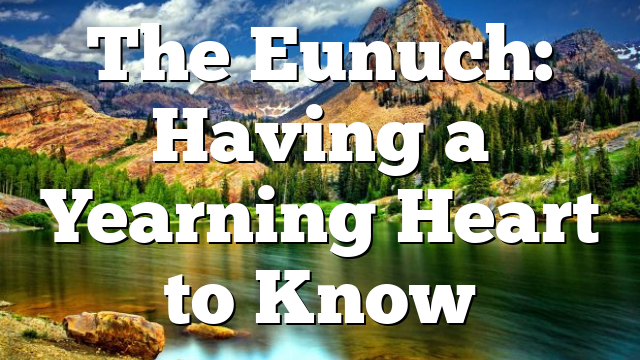 The Eunuch: Having a Yearning Heart to Know Part 1

Acts 8:26 An angel spoke to Philip: “Arise and go…” 27 And he arose and went, saw a man of Kush, a eunuch of great authority under Kandake/sovereigness . This man was in charge of all her treasury, who had come to Jerusalem to worship. 28 and returning to his way home in his chariot finding him reading from the prophet Yeshayahu/Isaiah.

29 And the Spirit said to Philip, “Go near and join him in that chariot.”

We see the eunuch already has faith, he went to Jerusalem to worship. It is like many of us, we gather to worship, to give praise to the Father and hear messages from the ones sharing the Word. When we leave ‘worship’ & filled with wanting to know more, we pray and study like the example of the eunuch reading as he left Jerusalem.

The Father knew the eunuch’s heart and had an angel tell Philip to ‘go’ and the Spirit also told him to ‘go near and join him’… knowingly this eunuch’s heart was open to hear the Truth of all things he believed in of the Father and desired greatly to get understanding. It was the ‘Spirit’s leading’ to ‘go’ and explain the Scriptures to the eunuch, otherwise Philip would have never known.

We can go to see friends and strangers, and share the Word until we are blue in the face, but if the Spirit is not present, then who will listen! We all have friends, we know them and they know us… we know we cannot ‘force’ His Word and Truths on each other, each one of us must be ready to receive. We can plant a ‘seed’ here and there, but there is no need to ‘chase our friends away’. When we go visit friends, we visit as friends… knowing to not go over boundaries of trying to ‘force someone to believe’. If anyone ask, knocks and seeks, then the door will open.

The eunuch held a high position, but he didn’t let that get in his way or the amount of money paid him. He could of thought of Philip as another ‘dog’ chasing after money from the rich, but he did not judge Philip! With a true, humble and meek heart… he wanted to know and understand the Father and His Way and Truth. The Spirit lead Philip to him!