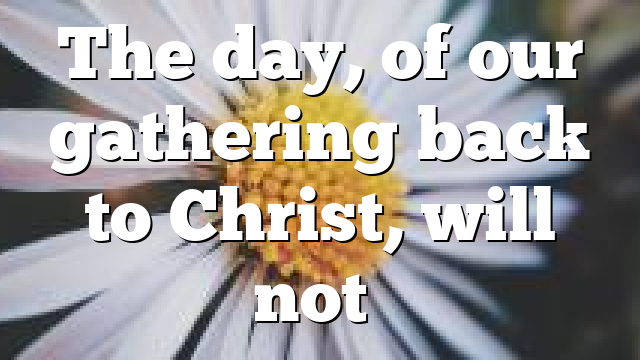 The day, of our gathering back to Christ,
will not happen until AFTER the “spurious messiah” (Antichrist/Satan) has reigned.

There is no more fitting way to begin an examination of the Rapture theory than with the words of the great scholar, E.W. Bullinger, in his Introductory to “How to Enjoy the Bible”, pg. 6, American Christian Press, New Knoxville, Ohio.

“When we come to ask ourselves, and say, ‘Where did I learn this?’
‘How did I get this?’ ‘Who taught this to me?’
it is astonishing to find out how much we have imbibed from man, and from tradition; and “not directly” and for ourselves, from the Word of God.
“All that we have learned from our youth up “must be tested” and proved by the Word of God. Where we find it is true we must learn it over again, from God. And where it will not stand the test of His Word we must be not only content, but thankful to give it up; and receive Divine revelation in the place of man’s imagination.”

So what is this Rapture theory?
What makes it so popular?

And why is it a major doctrine in the majority of the Christian churches?

Today there is considerable disagreement among Bible “theorists” (those are people who develop their “own doctrines” and then look for scriptures to support them) as to when this Rapture occurs.

We have the Pre-trib, Mid-trib, and Post-trib theorists (“trib” is short for tribulation).

The Pre-trib “theory” is the most prevalent and states that Christ returns before the tribulation of the false-christ and “takes away” His church.

Furthermore, this event could occur at any moment
(which is the reason my Grandma said I should always wear clean underwear).
The antichrist is then left free to wreck havoc and destruction upon the earth, something akin to a WW III.

Sound reasonable to you?
Hey, sounds great!
We just fly up in the air before the battle and save our own “skins”?

Do you for one moment think that men and women of God are afraid to take a stand and face losing their lives (in the flesh) if need be to defend their loved ones?
They have proven time and again they are not afraid, else we would not be free today!

To make matters worse, many Christians are told that when Satan is here they are going to be flown to a place of safety!

It is embarrassing that our brothers and sisters want to “flee into the wilderness” (most are told they are going to Petra) to be protected by a bunch of rocks.
They’ve been listening to people with “rocks in their heads”, promoting a sick woman’s dream.

We don’t need sheltered caves to protect us!
We’re men and women of God, Christians!
Our ROCK is around us at ALL times.

We need to wake up and quit listening to the uneducated!

Remember what E.W. Bullinger suggested in the opening of this study.

Put this Rapture theory to the test of common sense and scripture.

If you can document it in God’s Word then by all means hang onto it.
But if it comes up short then forget it!
Be thankful to drop it like a “hot potato”.
YOU must decide for yourself based upon “your” consultation with the Word.

I suppose what is most amazing about the Rapture theory
is that the Bible is not unclear at all about when Jesus Christ returns.

He returns at the seventh trump, the LAST trump,
AFTER Satan has been standing in Jerusalem “claiming” he is God.

Paul explained this so thoroughly and simply
that there is no way we can misunderstand who comes first.

Paul is saying “don’t be confused about when Christ returns,
whether someone tells you to believe their ‘version’ or some Bible thumper “twists” chapter 4 verses 16-17 of my first letter to you, 1st Thessalonians.”

[3] Let no man deceive you by any means: for that day shall not come, except there come a falling away first, and that man of sin be revealed, the son of perdition;

Jesus Christ IS NOT returning until the great apostasy (falling away) occurs AFTER Satan, the son of perdition (meaning the son who will perish), is revealed.
[4] Who opposeth and exalteth himself above all that is called God, or that is worshipped; so that he as God sitteth in the temple of God, shewing himself that he is God.

The spurious messiah, Satan, will have all the credentials necessary to convince the world that he is in fact the Messiah come.
This will happen at the sixth trump, BEFORE Christ returns.

[5] Remember ye not, that, when I was yet with you, I told you these things?
Paul is reminding them that he covered all this when he was with them, but false teachers had been up to “no good”.
[6] And now ye know what withholdeth that he might be revealed in his time. [7] For the mystery of iniquity doth already work: only he who now letteth will let, until he be taken out of the way.

Every Rapturist I know claims that the “he” in “he who now letteth will let, until he be taken out of the way” is the Holy Spirit.
In other words, the Holy Spirit will be taken away in the Rapture
along with the saints and then Satan will be left to do his destructive thing.

That’s such poor scholarship they ought to be ashamed.

But they are not.

They are blind and they are leading the blind.

They have a “theory” and they twist a poor translation to make it fit.

If you are fortunate to have a Companion Bible it will document the subject and the transitive verb used here, which requires that an object be supplied.

But for simplicity sake, and “if you do not have” a Companion Bible (you really should have one), just know that this (Living Bible) will document that the following translation (though not recommended as a regular study Bible) is correct and quite accurate concerning these verses.

2 Thes. 2:6 (Living Bible) And you know what is keeping him from being here already; for he can only come when his time is ready.
Keeping who from being here?
Satan, the son of perdition.

He is the subject being discussed.

This is so simple.

[7] As for the work this man of rebellion and hell will do when he comes, it is already going on, but he himself will not come until the one who is holding him back steps out of the way.
This man of hell, Satan himself, is coming IN PERSON when the one who is restraining him let’s him go.
[8] Then this wicked one will appear, whom the Lord Jesus will burn up by His presence when He returns.
So who, pray tell, is the one who is holding Satan back?

It’s Michael, the archangel, the prince of Israel.

Rev. 12:7-9 And there was war in heaven: Michael and his angels fought against the dragon; and the dragon fought and his angels, [8] And prevailed not; neither was their place found any more in heaven. [9] And the great dragon was cast out, that old serpent, called the Devil, and Satan, which deceiveth the whole world: he was cast out into the earth, and his angels were cast out with him.

You didn’t know Satan was in heaven?
Well that’s where he is right now and Michael and his troops have him restrained.

Yes,
Satan was here, in person, in the garden of Eden and at the time of Job.

But the last time he was here, in person, was when he tempted Christ, who upon overcoming his temptation, put him behind Him.

And that’s where he is now.

Satan’s evil spirit is here, just as the Holy Spirit is here,
but neither Satan nor Christ are presently here, in person…yet.

They are both coming soon and Satan,
as Paul explained in Thessalonians, will arrive first.

Let NO man deceive you!

For that day, of our gathering back to Christ, will not happen until AFTER Satan, as the false-christ, has reigned.

To study the Bible is the noblest of all pursuits; to understand it, the highest of all goals.
We pray that with the guidance of the Holy Spirit, you accomplish both.

FacebookTwitterSubscribe
Subscribe to receive all news to your email or phone: [wysija_form id="1"]
backChristdaygatheringhistoryNOTOURtheWILL

Will antichrist be a Jew?

Will antichrist be a Jew?