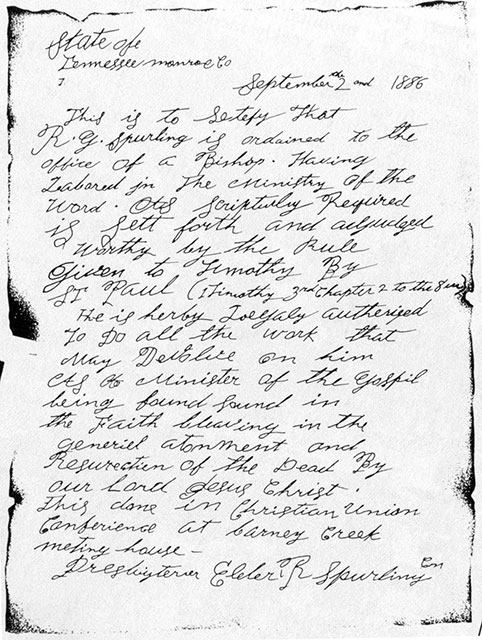 The Church of God….”continued their meetings; yet the work was rather slow to develop, as so many had been led into error by the false teaching…but a sufficient number remained true to keep the the work alive.” p. 13 Juillerat, L., Howard, editor Book of Minutes, Annual A Assembly Minutes, Church of God Publishing House 1922

In your opinion what were these false teaching(s) that hindered the growth of the group for the first 16 years. I don’t believe it was snake handling that came later.

Perhaps we can make a list of conjectures of false teachings that hindered the early growth.

Brian Crisp [02/04/2016 6:43 PM]
Not sure on a lot of their early false doctrines but there are several now. But what denomination is perfect. None at all. They have gone through many changes though.

Charles Page [02/04/2016 6:49 PM]
I am referencing the false doctrines they rejected which was clearly evident from the early history. They lost many people at the beginning.

Jim Price [02/04/2016 7:24 PM]
As I recall the false teachings were in the eye of the beholder. I think of it as a power struggle between this group and the A.J. Tomlinson group.

Billy Monroe Poff [02/04/2016 7:32 PM]
It was in the late teens into the early 1920’s that snake handling began after it was endorsed by George Went Hensley, a Church of God minister. The practice was quickly repudiated by the Church of God leadership and Hensley left the COG IN 1922 and the small number of congregations which practiced it left with him to become independent congregations generally using the name ‘Church of God with Signs Following’. Hensley died in 1955 after being bitten by a snake during a church service.

Charles Page [02/04/2016 7:33 PM]
I’m referencing the situation in 1902. They had a great revival already and multitudes were involved but by 1902 there was just a handful of people. Conn refers to the “interlopers” who produced false teaching. The small group had reject these teachings and I am asking what were these teachings.

Jim Price [02/16/2016 1:40 PM]
We may get a hint of these false teachings in Wade Phillips book ( pg 98 & 99 ) the chapter heading was ; Born With A Birth Defect. In it he said that Spurling believed in freedom of conscious and thus allowed each member to work out their own salvation with fear and trembling. They did not overtly condemn tobacco or liquor especially if used for medicinal purposes. Even fornication was tolerated and murder was tolerated if the community thought that the one killed deserved to die. Divorce and remarriage was also permitted under certain conditions. In effect the laws of the old west was in action in the mountains of east Tn.. As the movement traveled to Cleveland in the early 1900’s the folks there declared some of the above to be false teachings. They were not so much teachings as acceptance of the human condition. One wonders how our history would have been different if it had remained non-judgemental and less legalistic.

Ed Brewer [02/19/2016 10:51 AM]
….until well after embracing Pentecostalism, it is my understanding that the early church wrestled almost exclusively with the identity of the church in scripture, and more specifically the necessity of being included in the ‘succession’ of the locally prevalent landmark tradition (the landmark Baptist movement didn’t even see itself as Protestant, but rather tried to trace their lineage all the way back to the Apostles – membership was admission to the ‘Bride of Christ’ and all others were to be only guests at the marriage supper) – in a very real way, to leave the Landmarkism of Holly

Jim Price [02/19/2016 10:56 AM]
I was able to double click and then hit the + key & was able to read just fine.I am not arguing here that Spurling nor Phillips got everything right, just relating what I have read.

John Kissinger [02/19/2016 2:13 PM]
Ilya Okhotnikov reported some about that but Spurling was sound. It was their coming out of nominal denomination they struggled with

FacebookTwitterSubscribe
Subscribe to receive all news to your email or phone: [wysija_form id="1"]
churchcontinuedgodmeetings

CHANGED INTO A DIFFERENT PERSON

[In six days EVERYTHING that God spoke, CAME TO PASS! Our Abba Father is wonderfully amazing; he can accomplish awesome things by just breathing…