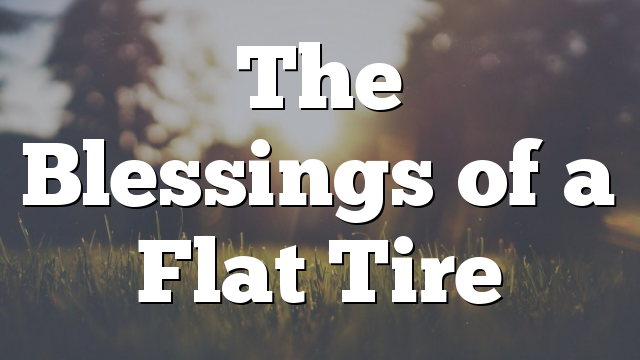 Most of you know that I am a Christian historian/theologian. But few of you know that my wife is a fine novelist and non-fictions writer. Her latest published work is Watching God Work: The Stuff of Miracles. This work describes her transformation from a cessionist Baptist to a charismatic healing and counseling minister. It also documents in funny and entertaining ways our walk together in ministry. What follows in an incident that happened to us several years ago. Somehow the text got “lost” amidst the multiplicity of files on her computer and did not make it into the book. It shows how God can wonderfully work in and through irritating times.

HERE is the link to Amazon for all of Carolyn’s published books. Another is coming soon.

The Blessings of a Flat Tire

It is hard to believe but true that God can use even mundane irritations like a flat tire to bless us and others. Bill and I were on the way back from conference in Virginia Beach where we had blessed others and been mightily blessed at a conference. Naturally, Ol’Scratch wanted to get a lick in and harass us for the blessings. But it didn’t work, at least not in the end.

On I-85 somewhere in North Caroline (we can’t remember exactly) Bill decided to pull off and get gas and give me a chance to walk a bit. At our age the joints sort of rust up quick, so we have to walk to keep them lubricated. We pulled off into a really nice little town; the center was clean and freshly painted, most of the stores still in business and new lamp posts in town square. It had a really nice atmosphere.

We stopped at one of those gas station/food-mart places. After I had walked the isle of the food-mart I went back to the car. Bill, who was pumping the gas, noticed that a rear tire was low. The air pump at the station was “out of Order” but we were informed by the cashier that the car wash down the street had one that was working.  Off we went. But the time we got there the tire was flat, not just low.

Bill knew he had to change it. He let out an oath, not the real bad kind, but certainly not “Praise the Lord!” He got all of our luggage out of the trunk and into the back seat. (I must confess here, I do not pack light. I mean, I like to be prepared for any emergency, or change of weather, which necessitates extra clothing, first-aid kit, and all sorts of things). The back seat was pilled practically to the roof with the trunk luggage before Bill finally got to the spare tire. With considerable huffing and puffing he got the spare on, only to find it too was low, too low to drive safely any distance.

So we asked “Carman,” our Garmin GPS device, for directions to a tire store/service station, and one came up just a half mile away. We couldn’t find it, and went around the corner to a Laundromat for advice form the locals. Three African-Americans were there talking, and one was particularly well dressed, with shirt and tie. They said that right around the corner, where we had been, there was indeed a tire shop, but hurry since it was now 5 minutes of five, and they close at five.

On the second try we did find it. It had no commercial sign – I guess the locals just knew where to go to get their tires fixed. The owner was closing and said his tire man had just left. (He was in his eighties, I guess, and did not volunteer to do the tire himself). Just as Bill was about to ask Carmen for directions to the nearest motel, the three fellows from the Laundromat come around. As soon as they learned that the tire man had left, the man with the tie whips out his I-phone and starts calling.

It turns out he is the pastor to a local full gospel church. The tire man is the son of one of his parishioners. He dilled the parishioner, who gave him his son’s cell phone number. Pastor-man (we never asked their names) called him immediately and asked him to come back to the shop to “help a Christian brother.” He hangs up with a smile and says “He’ll be here in a couple of minutes.”

So we all start talking. Bill shares that he is a part time pastor and healing evangelist, and Pastor-man says that he just finished preaching on “by his stripes we are healed” which ended with a laying on of hands service. Bill asked if anyone present still had a healing neeed, and when they all said everything was fine Bill went into his silly routine of saying, “Oh how terrible, everybody is well!”

It turned out that one of the other fellows, dressed in one of those sport-team jackets was in preparation to be ordained as assistant pastor for Pastor-man. We all prayed for him: that his process go well, and Bill prayed that he receive a special anointing in healing in his ministry. Just then Tire-man shows up and goes right too repairing our flat.

Everyone was treating us so nice that I felt I had to start giving out copies of my novel. I told them it was a wman’s mystery novel, and that their wives would especially enjoy reading it. (Bill dislikes the way I give out so many of my books free, but he didn’t seem to mind his time.) Pastor-man had to leave, as we thanked him for his blessings, and prayed a further blessing and revival for his church. After a bit more talking it turns out that Sports-jacket man has some marital problems. You guessed it, Bill and I prayed for that situation.

We then went inside the tire office and had a nice conversation with Owner-man. It turns out, all of his children went to college, and one of his grandsons is now teaching physics at a state university.  Finally, maybe after working for a full half hour or more on our tire, including replacing the valve, “Tire-man” replaces our tire. As he was doing that I encouraged him to go to church every Sunday (Pastor-man had sort of complained that Tire-man was lax in this).

Well after all of this Owner man gave Bill the bill – fifteen dollars. Bill actually protested and said this was too small. But we both thanked and blessed everyone again.

On the road again, we thanked the Lord for this flat tire. What a blessing it had been praying and talking with these Christian brothers. Even without knowing their names we felt at home with them. The moment was like the reverse of those old western movies when the hero cowboy rides off to the sunset and the town folks in awe say, “Who was that stranger?” Well, we were driving off into the sunset and asking ourselves, “Who were those strangers?”

What a difference the Holy Spirit makes in providing just the right help at just the right time. Had we been non-believers, the process would most certainly been more clumsy and costly. Perhaps Bill would not have been prompted to ask for help in the Laundromat, not would that pastor been providentially there. Certainly we had a road assistance plan, but those things take hours to come to you, etc.

Indeed, having that flat tire was a great blessing.