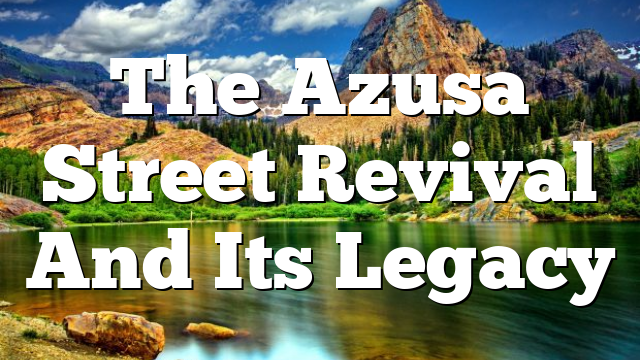 The work is divided evenly into two sections: history and legacy. The historical section deals with Seymour, those involved with the mission, and its spread through North America and overseas. We move quickly from the immediate (Azusa) to the South (G.B. Cashwell) to the international. The legacy section incorporates the theological, racial, and social vision of Seymour, albeit most of the essays are only loosely connected with the man himself. From here I will move to necessarily brief comments about individual chapters before reaching the sum.

Gastón Espinosa examines Seymour’s radical egalitarianism and its demise while, on a similar note, Estrelda Alexander traces the increasingly restricted freedom of Azusa’s female cadre. Kimberly Ervin Alexander provides an insightful chapter on healing, although its brevity leaves one wishing for more. T ough questioning Daniel Woods’s overreaching use of “full gospel” as a metaphor for “hunger,” I was intrigued with his six case studies of those who sought the baptism. David Roebuck gives an informative though dry account of Pen- tecostalism’s spread through Cashwell.

On the international front, David Maxwell’s important essay underscores the way in which Pentecostalism spread through missionary networks. I also enjoyed Cornelis van der Laan’s discussion on European perspectives on the origin of U.S. Pentecostalism. Paulson Pulikottil connects Azusa missionaries to India mostly to raise missiological issues concern- ing her unique situation. Allan Anderson gives the reader a world tour that is almost dizzy- ing, except that he lands on India long enough to make his argument stick. Finally, Anthea Butler, focusing on the black community, asks us to whom Pentecostalism belongs.

Concerning legacy, Frank Macchia and Simon Chan provide the gems of this volume. Both frame the baptism of the Spirit within a trinitarian schemata expressed through community. Wonsuk Ma notes a shift from otherworldly concerns in the early missionary eﬀort from the West to a later this-worldly concern among Pentecostals in the Eastern hemisphere.

The next portion picks up the racial theme in Fr ederick Ware, Frank Chikane, and Harold Hunter. Ware’s essay examines C. H. Mason and the development of the Church of God in Christ in terms of its identity stemming from Azusa Street. Chikane challenges Pentecostal- ism to face its racist past in light of white participation in apartheid. And Hunter elaborates on a complex racial situation in the Church of God of Prophecy, demonstrating that the issue is not always so “black-and-white.”

Pamela Holmes’s chapter employs a feminist critique of the role of women in ministry, particularly in the Assemblies of God of Canada. The next two chapters turn to social trans- formation. While thankful for a Peruvian voice in Bernardo Campos Morante, his essay desired more comprehensible English to render it eﬀective. Donald Miller proposes what he calls “Progressive Pentecostalism,” that is, Pentecostals who are socially engaged at a sys- temic rather than an individual level. The ﬁnal chapter, by T omas Rausch, addresses the role of ecumenism in the Catholic/Pentecostal dialogue.

The value of this work is that it serves as an introduction to a variety of current Pentecos- tal scholarship. A more conscious eﬀort by either the editors or the individual essayists to

connect the legacy half to Seymour would have made the structure of the volume more obvious and relevant. For instance, neither Macchia’s nor Chan’s essays on trinitarian theol- ogy were tied to Azusa Street, though such a connection surely exists. Rausch’s essay on the Charismatic Renewal seems even more remote.

The overlap in themes is the most disconcerting aspect of the work. We get a double dose of Cashwell in Woods and Roebuck but only one on Seymour. For a book about Azusa Street, little of it focuses on the founder or the mission. T ematic overlap also exists between Maxwell and Anderson in globalism and Macchia and Chan in theology. More topical diversity would have helped, though I do appreciate the editors’ attempt to address this. The editing suﬀers from numerous name misspellings, two paragraphs split in mid-sen- tence, and three historical errors (Boddy on 46, Bresee on 71, and Pierson on 130). As an introduction to individual scholars it is ﬁne; as an assessment of Azusa’s impact it falls short of its overreaching goal.