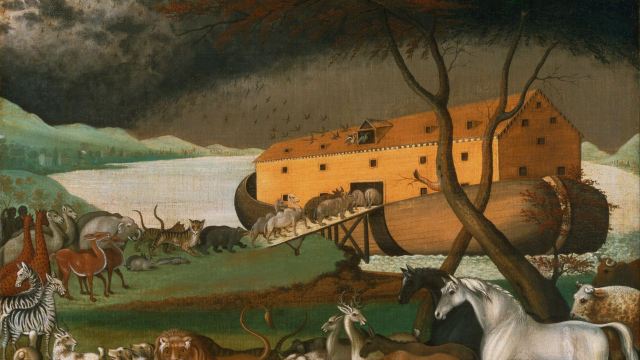 The Archaeological Evidence of Noah’s Flood

In 2011, I published the results of my twenty-year search for archaeological evidence of Noah’s Flood as should exist in the light of the narrative in the book of Genesis. [1]  I aimed to find out whether such evidence even exists and if so, what might be the Flood’s geographical extent. According to the methodology I employed, the four criteria I decided should serve as definite archaeological evidence of the Flood were:

(1) the sudden disappearance of the earth’s population in the third millennium before Christ,

(2) followed by a secondary worldwide dispersion of mankind from the Ancient Near East,

(3) a clear break in material culture every place where appears this secondary dispersion, and

(4) evidence that the sudden ending of the world’s population was due to drowning.

I didn’t initially look for evidence of drowning until I recognized it in the archaeological sites marking the world’s first civilizations. But those include most prehistoric sites on every continent. After several years of unfruitful searching, to my great surprise I accidently happened upon the very kind of evidence for which I had been searching. Interestingly, I first discovered the evidence in Palestine, the land of ancient Israel. At the end of the Early Bronze Age, the population of this land disappears. I didn’t make this discovery. The archaeologists had already noted it. To quote a prominent Israeli archaeologist:

A phenomenon so central in Palestinian history as that of the formation of urban society, with all its consequences for the material and spiritual culture of the country dissolves before our very eyes [Ammon Ben-Tor, The Archaeology of Ancient Israel, (Yale University Press, 1994), p 123]

The solvent for the Early Bronze Age cities was water. The Early Bronze Age ended about 2300 BC, very near the date of the Flood as can be calculated from the Bible. The first civilization to appear after this hiatus in population are the Canaanite city states, also mentioned in the Bible as the first civilization in this land following the Flood. These first Canaanites settlements, which include Ebla in Syria, mark the Middle Bronze Age in the Levant. While Egypt’s Old Kingdom is presumed to date to the Early Bronze Age, the many scarabs of Old Kingdom Pharaohs found in the Levant are all from Middle Bronze Age sites. These correspond to the Sumerian and Akkadian periods in Mesopotamia, the Sumerian civilization possessing the only language that transcended this great interruption.

The first civilization after the Flood

This Middle Bronze Age begins from the migration shown on the map of page 2 above. The origins of this spreading migration should be some place close to where we are meeting. Depending on the countries where it is found, it is variously called Transcaucasian, Kura-Araxes, or Khirbet Kerak. Transcaucasia is the region straddling the South Caucasus mountains and where run the Kura and Araxes Rivers that are just north of this mountain. Archaeologists who study this culture tell us:

Kura-Araxes traditions apparently emerged during a rapid burst of cultural evolution, the early stages of which remain undocumented or unrecognized. [Peter Glumac and David Anthony, ‘Culture and Environment in the Prehistoric Caucasus: The Neolithic through the Early Bronze Age,’ published in Chronologies in Old World Archaeology, Third Edition, Vol I  (1992, University of Chicago Press), edited by Robert W. Ehrich, p.203]

We may soon be able to document the amazing early stages of this culture should it be found to begin in the ancient wooden structure reported to be buried near the top of this mountain.

The EBIII culture is identified by its distinctive red-black burnished ceramics which obtain their red coloration due to being baked in an open fire. This first culture after the Flood which we might suppose as being that of Noah’s family began in these ancient mountains of Ararat which the Bible mentions as the landing place of Noah’s Ark. Most interesting, the settlements of this first culture are found in the highlands as if the lower elevations are still covered by water![2] The thin-walled, key-hole shaped building foundations associated with these sites are suitable either for tents or wattle-and-daub housing. The latter may have developed by turning tents into permanent residences as we might expect of migrating populations. Fireplaces are found in the center of these houses where likely was made the red-black burnished pottery.

We are fortunate to have working on this project Dr. Stephen Pfann, who pioneered the use of neutron activation analysis using this same Khirbet Kerak pottery. Working with Charles Burney of the British Institute of Archaeology in Ankara, Pfann discovered that the pottery was both imported and locally made. That points to the pottery spreading by migrations rather than trade, just what we should expect if this pottery was spread by families migrating from the Ark.[3]

There is another culture that extends over much of the same expansive region of the Ancient Near East as EBIII. It is associated with a city in ancient Mesopotamia called Uruk, but which the Bible refers to as Erech, one of the cities that Nimrod established in Shinar.[4] The name Shinar means ‘the land of Sumer and Akkad.’ The archaeological culture that spreads to or from this city which suddenly became the world’s largest is called Late Uruk. Cylinder seals and bevel-rimmed bowls mark the spread of Late Uruk. Of the many cultures in the Ancient Near East, Late Uruk is by far the most widespread. These are just some of many reasons to suppose that the city of Uruk was also the site of the Tower of Babel. The bevel-rimmed bowls and the wooden-mold used for making them may be among the artifacts reported to be found in the ancient wooden structure that so interests us. So might the tree-of-life motif that is so widespread in the Mesopotamian culture of this era if not also some form of proto-Sumerian texts. If this is confirmed, it will transform our understanding of ancient history.

Late Uruk is currently dated earlier than the EBIII. This is because it was presumed to have immediately followed the earlier Uruk phases, which however were ended by the Flood. The bevel-rimmed bowls, which were produced from a wooden mold, may have also served as a standard measure for trading grains and other produce, while the cylinder seals served as a mark of ownership. Likely, the cylinder seal was invented at Uruk where cuneiform writing was also invented. Some of these writings tell us that the origin of the Sumerians (a name which derives from Noah’s son Shem) was in the land of Aratta, near the origins of the Tigris and Euphrates Rivers just south of this mountain. Arrata was obviously the land of ancient Ararat where later existed the Kingdom of Urartu. These Late Uruk markers may be spreading with the Khirbet Kerak, Kura-Araxes, and Transcaucasian EBIII culture beginning from inside the ancient wooden structure on this mountain.

The material culture of archaeological sites of the Middle Bronze Age in the Ancient Near East has numerous characteristics which spread across the earth along the migration routes on the map from the end sheets of my 2011 book The Archaeological Evidence of Noah’s Flood (see map at right). Such intercontinental migrations as shown on the map will be unfamiliar to most readers. This is due to the cessation of the study of migrations and cultural diffusion that has informed archaeology since the sixties. Archaeologists no longer study worldwide migrations as shown on this map, reckoning that ancient agriculture and civilization developed independently in every land and continent. But this situation will soon change.

From the Middle Bronze Age of the Ancient Near East come the earliest historical cultures of every continent. The rich material culture carried by the migrants vary but they include spindle whorls and the heddle loom; waddle-and-daub huts and multi-generational houses with interior courtyards (megarons); the lost-wax form of bronze casting; the bow-and-arrow; bark paper and the hieroglyphic scripts used to write the earliest texts; spoked-wheel wagons; agriculture and animal husbandry; side lugs for tying and carrying pottery; giant urns for storing grain; gray, sand-tempered pottery, some with eggshell thin styles that appear to have developed from metallic predecessors and chevron, swastika, and other patterns created by stamping and incisions; cremations, and urn burials. It is also characterized by the practice of animal sacrifice, recognizing among other gods a great Spirit (i.e. invisible God) who lives in the heavens along with memories of the great Flood. All this concerns the archaeology of those who survived the Flood.

The archaeological sites of those who lived in the earlier civilizations who perished in the Flood have been mistakenly interpreted as elaborate religious burials. They are ordinarily found under mounds of soil as the case of the so-called Indian mounds of America, the barrows of Great Britain, the kurgans of Russia, and similar tumuli found throughout the world. This is because these sites contain elaborate burials as we might expect from houses and cities drowned by the Flood. Most of these dwellings are covered by mounds of topsoil, sand, and gravel that were eroded by the Flood then settled on these sites as the Flood subsided. We can conclude these are not ordinary burials but the ordinary dwellings of those buried by the Flood by a number of observations:

Woolley’s workers were already standing in the ruins of the Flood when they dug through a 8-feet layer of water-laid mud which in 1929 Woolley announced to the world as evidence of the “Flood,” then assumed but a local one. This stream of heavy mud would have been the first and lowest layer of silt to flow into the city from erosion caused by the waters that covered the Zagros mountains. Mud and topsoil covered the entire royal palace. Future settlers at the site of Ur would find this place more suitable for a garbage dump. The covered ruins of Ur became but one of the numerous tels throughout the Near East, most of them initially created by Noah’s Flood.

What would Paul and Peter think about the UPCI?

What would Paul and Peter think about the UPCI? Timothy Nail [08/24/2015 10:30 AM] A very good question. I attended a Oneness Pentecostal school…