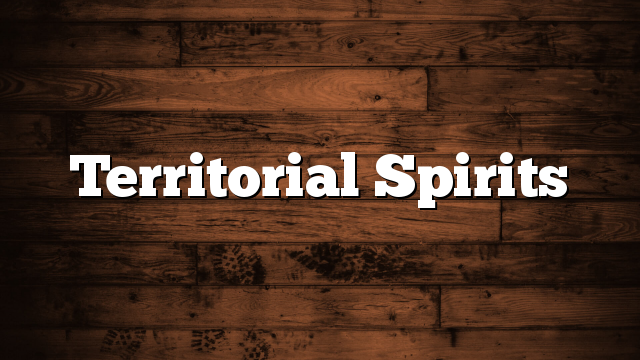 The belief in ‘territorial spirits’ is a pagan concept that holds certain demonic spirits rule over specific geographic areas.

[S]ome Christians accept the notion of ‘territorial spirits’ as readily as pagans, the only difference being that they believe that such ‘spirits’ should be confronted through authoritative prayer and commands issued ‘in the Spirit’.
– Source: Territorial Spirits, by Charles Hoole, Evangelicals Now, Mar. 1998

This idea is promoted by, among others, adherents of Kingdom Now theology, which holds that Jesus can not return unless and until “the Church” subdues and rules the earth.

The concept’s main proponent is C. Peter Wagner, who has influenced countless Christians — mainly within Evangelical, Charismatic and Pentecostal traditions — to wage spiritual warfare against what they view as ‘spiritual strongholds.’ Many Christians have also been influenced by descriptions of angels, demons, and spiritual warfare in the fictional books of Frank E. Peretti. Simplified examples of the battle against territorial spirits may include believers praying against the ‘Spirit of Lust’ over Amsterdam’s Red Light District, against a ‘Spirit of Greed’ over portions of Las Vegas, or ‘Spirits of Witchcraft’ over sections of New Orleans.

Promise for the Day – For the same Lord over all is rich unto all that call upon him. (Finis J. Dake)