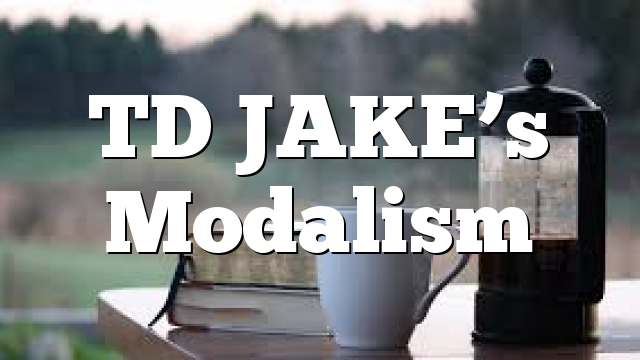 T.D. Jakes is associated with several troublesome teachings including the prosperity gospel and positive thinking. For our purposes, though, we will look at his teaching on the Trinity. Jakes has long been associated with Oneness Pentecostalism which holds to an unorthodox position on the Trinity. This position is known as Modalism or, historically, as Sabellianism.

Jakes has wide influence in many circles. Some 17,000 people attend his church on a weekly basis and millions more encounter his teaching through his broadcasts, conferences, movies, and books. He is one of a few Christian figures who has a voice that extends into the broader culture through association with Oprah Winfrey, American presidents, and other leaders.

What the Bible Says

These minor distinctions in trinitarian theology, a word here, a letter there, actually represent colossal differences and even eternal differences—the difference between heaven and hell. Modalism has long been labeled as a heresy meaning that if you believe it in place of the biblical understanding of the Trinity, you are not and cannot be a true Christian (much of this section can be found in Wayne Grudem’s Systematic Theology).

In all that is, in all that exists, there is only one God. No truth was more precious to the Israelites of old. In Isaiah’s prophecy God records:

It could hardly be clearer. The New Testament is equally explicit. Paul writes, “There is one God, and there is one mediator between God and men, the man Christ Jesus” (1 Timothy 2:5). James agrees: “You believe that God is one; you do well. Even the demons believe—and shudder” (James 2:19).

To summarize those seven statements, we might say, “God eternally exists as three persons, Father, Son, and Holy Spirit, and each person is fully God, and there is one God.” In all that we believe, in all that we affirm or deny, we must hold these seven statements together. If we take away one, the entire structure collapses. In fact, every time the Trinity comes under attack, or every time the Trinity is denied, it is because one of these statements has been taken away or tampered with.

Though he has recently denied being a Modalist, T.D. Jakes continues to use manifestations in place of persons and continues to affirm the faith of those who remain ardent Oneness Pentecostals. This is no minor quibble in theology because it contradicts and confuses the orthodox and accepted view of the Trinity. Until he clearly affirms the orthodox definition of the Trinity and denies the Modalist definition of the Trinity, we must regard him warily as a false teacher.

How are the terms Pentecostal, Charismatic and Hyper-Charismatic used

How are the terms Pentecostal, Charismatic and Hyper-Charismatic used to describe different religious movements? The typical use of Pentecostal on this site is in…