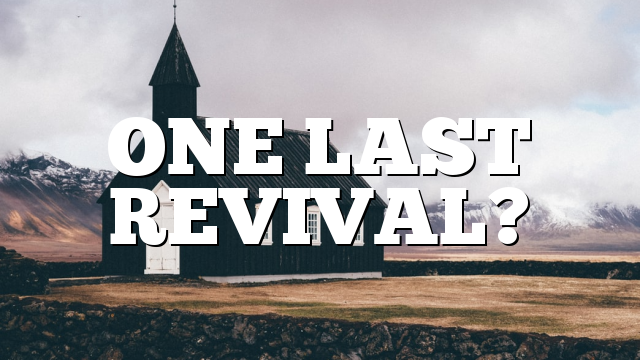 TRADITIONAL BELIEFS Are not easily forsaken.

The traditional belief that many Christians have is that before Jesus returns there will be one last World Revival, on the scale of the Welsh Revival, that will sweep tens of thousands of repentant sinners into the Kingdom of God. It is said that the scripture that would support this belief is: “Elias (Elijah) truly shall first come, and restore all things.” (Matthew 17:11)

Indeed, Elijah will come and we can read a whole chapter in the Book of Revelation of his stand alongside of Moses during the Great Tribulation years. These two Anointed Witnesses are known by their ministries: “They have power to shut heaven, that it rain not ….and have power over waters to turn them to blood.” (Revelation 11:6) That is exactly what Elijah and Moses did during their time spent on earth, and will do it again during the Great Tribulation years.

Elijah comes to ” restore all things.” He begins by dealing with the Laws of God that have been so undermined and eroded by the laws of man and by the permissiveness of society. They are restored, that is, put back, to what God’s Word originally declared. Sinful mankind are deeply convicted, but does this result in widespread repentance and revival breaking out, with the churches being filled to overflowing and the Pubs’ and the clubs having to shut down for lack of attendance? CERTAINLY NOT ! Society has no intention of abandoning their permissive lifestyles. Instead they succeed in killing Elijah and Moses. “…Because these two prophets tormented them that dwell on the earth.” (Revelation 11:10 ) and their dead bodies are denied burial so that all can view their remains. The world rejoices and gifts are sent to friends to mark the occasion. Thus the traditional view of revival resulting from the Endtime ministry of Elijah is far from being consistent with the scriptures…

Yet More Foreshadowings Wars and rumors of wars; great earthquakes in diverse places; famines; pestilences; distress of nations with perplexity; sea and waves roaring; like the days of Noah and Lot; dividing God’s land of Israel and hatred of its people (Luke 17:26-30; Luke 21; Psalm 2; Zechariah 12; Isaiah 17: Ezekiel 38-39; Joel 3:1-2). […]