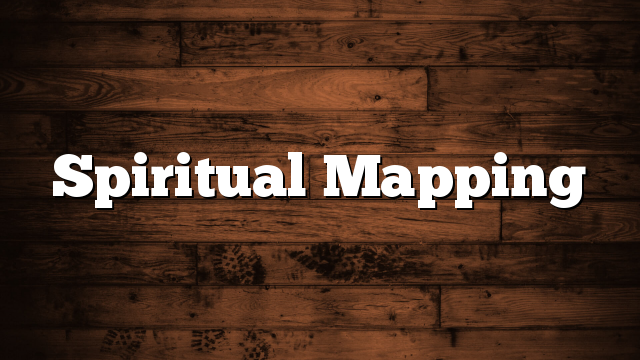 Proponents of the fight against territorial spirits engage in ‘Spiritual Mapping’ – a research tool meant to determine what is wrong with a specific community or geographic area.

They may discover, for example, that a certain neighborhood plagued by crime is home to a fortune teller — leading them to engage in Strategic Level Spiritual Warfare against the ‘Spirit of Witchcraft.’ Should the fortune teller’s business fold or move elsewhere, those who engaged in spiritual warfare expect to see positive signs, such as a lower crime rate, and more people accepting Jesus Christ.

[A] global movement of evangelicals has developed … that seeks to free cities and neighborhoods from social scourges even as it “takes them for God.”

Through “spiritual warfare” and an in-depth research effort called “spiritual mapping,” they aim to bring people to Christ and, in their words, “break spiritual strongholds” holding communities in their grip, whether they be vices, “false religions,” or “territorial spirits.”

The more aggressive, potentially confrontational aspects of these practices raise concerns within and beyond the evangelical community.
[…]

Mapping is the research tool – “the discipline of diagnosing the obstacles to revival,” and it answers the questions: “What is wrong with my community? Where did the problem come from? What can be done to change things?” says George Otis Jr. Mr. Otis, president of The Sentinel Group, in Seattle, produced the “Transformations” video and has written a handbook on mapping: “Informed Intercession: Transforming Your Community Through Spiritual Mapping and Strategic Prayer.”

He has visited cities worldwide and offers pastors a road map, including questions on the spiritual history and dynamics of their cities. They should gather, for example, detailed information on the status of Christianity, prevailing “social bondages,” historical events that caused trauma, predominant philosophies and religions, and human groups and demonic powers that pose spiritual opposition.

Otis points to vivid examples in the Americas:

In Hemet, Calif., a new pastor began noting on a map sites where what he believed to be negative spiritual influences were located: controversial religious centers, cults, youth gangs, and the West Coast’s largest methamphetamine manufacturing facilities.

After years of research and targeted prayer, participants say, drug production has been dramatically reduced and corrupt police have been fired, gang members have converted, the “power of a demonic strongman” was broken, cults left town or were burned out, and Christians are in key leadership positions.

In Cali, Colombia, home of the infamous drug cartel, pastors carried out a spiritual mapping campaign “gathering intelligence on political, social, and spiritual strongholds” in each of the city’s 22 administrative zones. They began holding all-night prayer vigils involving thousands in the soccer stadium.

When vigils were followed by periods without homicides and the arrests of major cartel leaders, “a new openness to the Gospel was felt at all levels of society,” and churches began to see “explosive growth.”
– Source: Targeting cities with ‘spiritual mapping,’ prayer, by Jane Lampman, Christian Science Monitor, Sep. 23, 1999