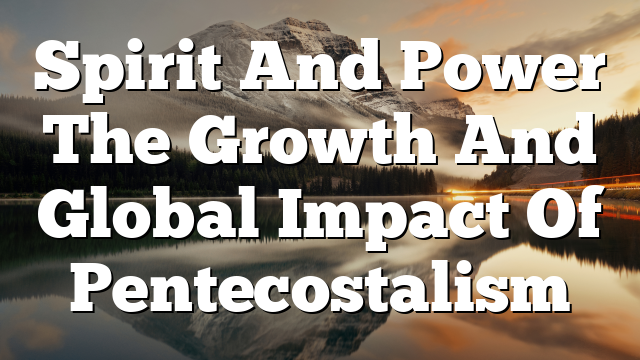 136 book reviews Donald E. Miller, Kimon H. Sargeant, and Richard Flory Spirit and Power: The Growth and Global Impact of Pentecostalism(Oxford, ny: oup, 2013). xv + 412 pp. $29.95 paperback. This book addresses the vital question of where and why is Pentecostalism growing rapidly and globally, and what is its social and political impact? A wide spectrum of scholars including theologians, historians, and social scientists approach these questions to enrich the total perspective. Most essays rely on extensive survey research and in-depth demographic field methods, with analysis offering complex explanations for the phenomenal growth and impact of Pentecostalism. The book has seven sections, each consisting of two chapters. The first two sections discuss the origin and rapid growth of Pentecostal movement. Allan Anderson, for example, advocates that Pentecostalism is a polynucle- ated movement; the inherent migratory tendency and development of a global network in early Pentecostalism contributed to making it a multidimensional global movement. He argues that along with Azusa, the Mukti revival in India is a significant early formative centre of Pentecostalism. The periodicals and its transnational characteristics played a significant role in promoting a Pente- costal global meta-culture. Meanwhile, Cecil M. Robeck Jr. upholds that Azusa Street has a central role in the origin, expansion and global growth of Pen- tecostalism. Section two discusses why Pentecostalism is growing in some regions but not in others. It highlights Pentecostal ability to exploit certain organizational advantages especially in a free religious market place, but leaves unaddressed the question whether it flourishes in a more restricted context. On one side, Pentecostal response to popular consumer demands by developing products that offer healing to the poor and the marginalized is argued as the chief reason for its commanding position in many regions of Latin America. On theother,PentecostalismcomparativelyfailedinParaguay.ThelowPentecostal profile in Paraguay is due to external factors, including the adverse Catholic responses, and internal factors including internal divisions. Section three and four discuss the political and social engagements of Pen- tecostalism. Despite of its growth, Pentecostalism is not the best agency for major political change. Although they offer a different version of what glob- alised society could be, being economically and organizationally divided, and politically splintered, Pentecostals are unlikely to play an effective role in cre- ating a new democratic vision of global society. While Pentecostalism may not be a panacea for democracy, it will not hamper the process; it will make mod- erate contributions to the democratic development. Through their abiding of the law, volunteer involvement and creation of civic societies, and emphasis on © koninklijke brill nv, leiden, 2015 | doi: 10.1163/15700747-03701010 ========1========book reviews 137 education, Pentecostals promote and strengthen democratic transitions. The growing Pentecostal involvement in all levels of societies in the recent years suggests that Pentecostal spirituality is an authentic expression in the public. PentecostalismoffersnewmodelsofsocialengagementsasinElSalvador.Spirit empowerment helps people to become effective agents of personal and social renewal. This supernatural “individualism” and the life-giving adaptability of Pentecostal spirituality is a powerful force enhancing the new world order. The Nigerian Pentecostals’ social involvement has been developed into national transformation. Being the representative priesthood and kingship, and regency of the sovereign God, the church can make a bigger impact in the nation. Section five discusses the transnational nature of Pentecostalism. Afe Ado- game challenges the explanations that privilege ecclesiastical externality behind the success of African Pentecostalism. The story of a growing Nige- rian Pentecostal church, The Redeemed Christian Church of God shows that internal religious dynamics in tandem with external social processes, act as significant stimuli for Pentecostal growth in Africa and beyond. Following the Azusa model, Latino Pentecostal immigrants are increasingly involved in mis- sion through extended family and friendship networks. The immigrants are not only taking their faith with them as they migrate but following their transna- tional networks to participate in Christian Mission. Section six discusses gender’s role in Pentecostalism. Women had a crucial role to the formation and development of Pentecostalism globally. Outlining the role of key women for the Azusa revival and its missionary expansion, and the contribution of women missionaries, Estrelda Alexander argues that women were involved in every aspect, including preaching, teaching, healing, church administration and publication. Katherine Attanasi discusses how gen- der currently operates within Pentecostalism. There is a scholarly tendency to characterize Pentecostalism as having a masculine or feminine ethos. While Colombian Pentecostalism is feminized, South African Pentecostalism is mas- culinized. She argues that Pentecostal studies should concentrate on how it may contribute to women’s agency, flourishing, and freedom within their par- ticular sociocultural and religious contexts. Section seven discusses the relationship between religious experience and Pentecostal growth. Experience is a core feature of Pentecostalism because it promotes direct encounter with the divine Spirit. The research from Southeast Asia demonstrates that Pentecostal growth is related to the experience of the Spirit, which leads to the desire to spread the message and get involve in charity activities. Although Pentecostal churches operate within the restrictive legal framework in this region, they are growing rapidly because it has both personal and communal dimensions. Prophecy had played a significant role in PNEUMA 37 (2015) 111–171 ========2========138 book reviews the enactment of missionary work that fuels Pentecostal growth. The dynamic relationship between prophetic spiritual experiences and mission activities is a specific case of godly love that describes how humans cooperating with a living God who empowers them for benevolent service to others. Examining the global expansion of the Pentecostal movement over the last century, the editors make a compelling conclusion regarding the place of religion in the world today. As they put it, with its distinctive religious experience and potential to engage in diverse social, cultural, and political contexts, and its outreach to the poor, and the needy, Pentecostalism is a legitimate option in the modernizing secular societies. This is an extremely important book for everyone who takes religion seriously, and generates one importantquestion: whyisnot Pentecostalisma globalreligiousforceof greater social significance in the twenty first century? Hopefully other Pentecostal scholars will take on the challenge. Wessly Lukose Filadelfia Bible College, India [email protected] PNEUMA 37 (2015) 111–171 ========3========

The Lord makes a wilderness a holy place

“Now Moses kept the flock of Jethro his father in law, the priest of Midian: and he led the flock to the backside of…