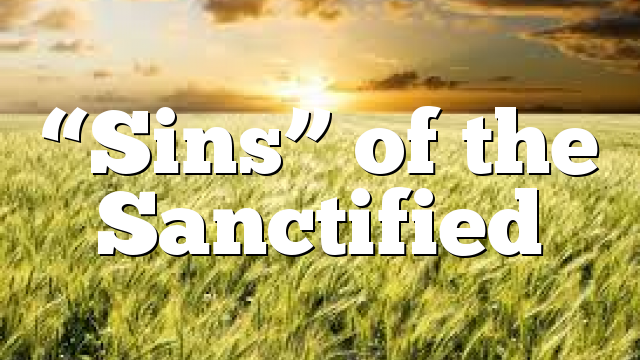 Without taking time to discuss, define, or explain Wesley’s teaching on entire
sanctification as a present experience in the believer, I do want to point out his
definition of sin as it relates to the sanctified life. When Wesley used the term “freedom
from sin,” he meant first that the believer is free from the committing of wilful
sin, and second, that the entirely sanctified is free from the inner corruption of sin.
The “sin in the believer,” which is inherited from Adam and which remains in the
heart after justification, is by the power of the Holy Spirit cleansed in the work of
grace called entire sanctification.

In order not to be confused at this point, one must remember that Wesley did
not include in his definition of sin in believers everything that might appear to be
sin in the believer’s life. He claimed that after a person is entirely sanctified, there
still remains those shortcomings, failures, and mistakes, which are common to our
fallen human nature. Wesley’s doctrine of perfection does not say that the believer
is perfected in every sense. He is perfected only in the sense that his heart or motives
are purified, so that he is able to love God with all his heart.26
For Wesley, there are the sins of ignorance found in the entirely sanctified.
These wrongs may be hidden to the consciousness of the person. These sins of ignorance
are not the malicious kind. The evil corruption of the heart may be cleansed by
the Holy Spirit. Yet, because of a lack of knowledge, or because of poor judgment, a
person can fall into wrong actions. One who is still deficient in knowledge may
wrongly judge his path of duty and thus act in a wrong manner. Yet all the time
he may believe he is doing the right thing, until new knowledge comes to him. This
wrong because of ignorance may be serious and yet not be a defect in the pure love
for God. In fact the faulty act itself may have been prompted by a perfect love, and
by a pure heart that is ready and willing for more light. The only cure for this kind
of wrong is an increase of knowledge. This comes about gradually as one learns
more and more of the way he should walk.27
Sins of infirmity are those defects that result from a weakness of body or mind.
Wesley believed that there are irregular desires in our bodies. The body is liable
to many evils every day and hour. Temptations will constantly beset a man who
“dwells in this corruptible body”. There will be grief, sorrow, and “heaviness connected
with this earthly existence.” There is a “degree of anger” which is not sinful
anger, nor need it be an opposite of love and compassion.28
This anger which is not
sinful “is often attended with much commotion of the animal spirits.” Only with
God’s light can it be well distinguished from sinful anger.29
The “house of clay” has
the power of “dulling or darkening the understanding” and of “damping and depressing
the soul and sinking it into distress and heaviness.” It is possible in this
condition for “doubt and fear” to arise naturally and for Satan to disturb the
cleansed heart, though he cannot pollute it.30
To make perfection higher than a perfect
love compatible with an earthly and corruptible body is to “sap the foundation of it
and destroy it from the face of the earth.”31
Should these failures of the entirely sanctified be called sins? Many have
thought Wesley had a weak concept of sin because they believed he did not call infirmities
and mistakes sins. Many, and especially those of the tradition of Wesley,
have thought Wesley erred when he called them sins. What are the facts? Here is
what Wesley wrote,
I still say, and without any self-contradiction, I know no persons living
who are so deeply conscious of their needing Christ both as prophet, priest, and
king as those who believe themselves and whom I believe to be cleansed from
all sin; I mean, from all pride, anger, evil desire, idolatry, and unbelief. These
very persons feel more than ever their own ignorance, littleness of grace, coming
short of the full mind that was in Christ, and walking less accurately than
they might have done under their divine pattern, are more convinced of the
insufficiency of all they are, have, or do to bear the eye of God without a
mediator; are more penetrated with a sense of the want of Him than ever they
were before.
Here are persons exceedingly holy and happy; rejoicing evermore, praying
without ceasing, and in everything giving thanks; feeling the love of God and
man every moment ; feeling no pride or other evil temper … . “But are they not
sinners?” Explain the term one way and I say yes; another, and I say no.32

Wesley, along with most leaders in the Christian church, taught that the holiest
saint errs, falls short, and continues to need the atonement. Obviously, he is not a
sinner in the same sense that he was before regeneration, nor even in the same sense
as before entire sanctification. But because of his falling short, he still needs the
atoning sacrifice of Jesus, and in humility abhors himself, is penitent, and seeks forgiveness.
He feels more than anyone else his complete unworthiness before God.
Conclusion
Here is a summary of the five ideas about sin found in Wesley’s writings.
1. Man fell in the Garden of Eden and became totally depraved and passed this
depravity on to his descendants.
2. Though man as he is born into this world inherits the guilt of Adam and is under
the curse of sin, yet God’s grace is extended to him, removing the guilt of Adam’s
sin and extending power to lift him to the place of choice and redemption.
3. The only sin in man which will condemn him eternally is the personal, wilful
choice rejecting the grace which God has given to him. This is what Wesley
called wilful transgression of a known law.
4. Believers are sinners only in the sense that corruption still remains in them and
they have to fight against this pride and jealousy, which keep exerting themselves
in the believer’s life.
5. Though there is cleansing from the corruption of the evil heart and the enablement
to love God with all the heart in an experience of entire sanctification, there
still remains in the life of the believer sins of ignorance and sins of infirmity. For
these the person needs continual cleansing of the blood of Christ.

When Dust Shall Sing