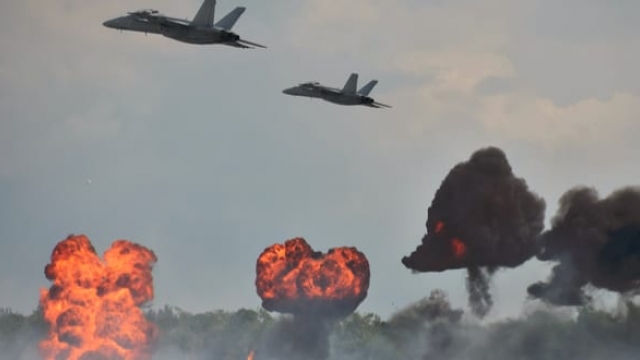 I will say to the North, “Give back!” And to the South, “Do not withhold! Bring My sons from afar, And My daughters from the end of the earth Isaiah 43:6 (The Israel Bible™)

A catastrophic attack in Saudi Arabia by Iran-backed Yemenite Houthi rebels shook the world, destroying the facilities that produce five percent of the entire world’s oil. If the U.S. picks up the gauntlet thrown at their feet by the Iranians, the confrontation in Yemen predicted by Isaiah as preceding the pre-Messiah War of Gog and Magog may suddenly appear, as one rabbi said, “much sooner than anyone thinks.”

A total of 19 targets including two oil facilities were hit in Saudi Arabia on Saturday by several coordinated strikes, knocking out half of the country’s crude oil production, some five million barrels a day. Yemenite Houthi rebels claimed responsibility for the attacks against Saudi Aramco oil facilities in Abqaiq and Khurais.

Saudi Crown Prince Mohammad bin Salman received a call from U.S. President Donald Trump on Saturday in which Trump reiterated America’s readiness to help defend the kingdom, and noted the negative effects the attack would have on the U.S. and world economy, according to the Saudi Press Agency.

U.S. Secretary of State Mike Pompeo accused Iran of being behind the attacks, saying there was “no evidence” Yemen was behind what he called “an unprecedented attack on the world’s energy supply.”

Oil prices soared in the wake of the attack to six-month highs on Monday, with gains of as much as 20 percent. Brent crude oil, the international benchmark, gained almost $12 a barrel reaching up to $71.95 a barrel, before dropping back to $68 a barrel.

Yemen is First Battleground in Gog and Magog

Rabbi Yekutiel Fish,  an expert in Jewish mysticism who blogs in Hebrew under the title ‘Sod Chashmal,’ noted that events were unfolding precisely according to the verse in Isaiah concerning the War of Gog and Magog.

I will say to the North, “Give back!” And to the South, “Do not withhold! Bring My sons from afar, And My daughters from the end of the earth Isaiah 43:6

“The war between Iran and America, which is the sons and daughters from far away, will begin in Yemen,” Rabbi Fish said. “This will be the first stage in the multi-national War of Gog and Magog.”

The rabbi also noted that Persia appears very frequently in Jewish eschatology in a manner that includes the U.S. which is representative of Edom, the nation of “red men”, allying with Arabia. Rabbi Fish cites the Yalkut Shimoni, a compilation of rabbinic commentary on the Bible believed to have been composed in the 13th century, Persia’s role in the end-of-days is outlined in detail.

“Rabbi Yitzchok said: The year in which Melech Hamashiach (Messiah king) will be revealed, all the nations of the world will be provoking each other…The king of Persia  will provoke the King of Arabia. The King of Arabia, will go to Edom to take counsel and the King of Persia will threaten to destroy the entire world. The nations of the world will be outraged and panic. They will fall on their faces and will experience pains like birth pangs. Israel too, will be outraged and in a state of panic ask, “Where do we go?” (Yalkut Shimoni, Isaiah, 60:499)

“But the war will not begin until after the Israeli elections,” Rabbi Fish said. “The issues concerning the rule in Israel need to be completed before the war. But the war will certainly appear, and much sooner than anyone thinks.”

Other experts also see a conflict between Iran and the U.S. as fulfilling Biblical prophecy. Rabbi Matityahu Glazerson, an expert in Bible codes, looked for Biblical hints at the growing tensions between the U.S. and Iran and found them in the 29th chapter of Exodus. In a video, he explained that he found the Hebrew מתחל מלחמה (beginning of a war) interspersed with the word איסלם(Islam).

“The truth has to be told that Islam is what is behind Iran pushing it forward,” Rabbi Glazerson said.

The rabbi warned that the words ‘war’ and Iran were parallel to the word אורניום (uranium), noting that it is quite possible that Iran has nuclear weapons. Surprisingly (or perhaps not) connected to the word uranium were the letters אובמה (Obama).

“He was a troublemaker and a good friend of the Muslims and allowed Iran to have a nuclear program,” Rabbi Glazerson said.

Rabbi Glazerson noted that it was most significant that the letters ארהב (the abbreviation in Hebrew for the United States) were connected to the word ישראל(Israel), indicating they would be allies in the war.

The word Israel was in close proximity to the word הַתרָאָה (warning).

“Redemption can only come after Israel is first warned to repent,” Rabbi Glazerson said. “That is the purpose behind this war and that is the only solution that will bring peace to the entire world.”

On a positive note, the rabbi found אליהו (Elijah) three times in this section of the Torah.

“These are troubling times but if we repent, this is precisely what will bring Moshiach (Messiah),” Rabbi Glazerson concluded. “Only then will there be peace and tranquility all over the world.”

RAPTURE in 20 CENTURIES OF BIBLICAL INTERPRETATION

THE RAPTURE IN TWENTY CENTURIES OF BIBLICAL INTERPRETATION James F. Stitzinger Associate Professor of Historical Theology The coming of God’s Messiah deserves closer attention than it…