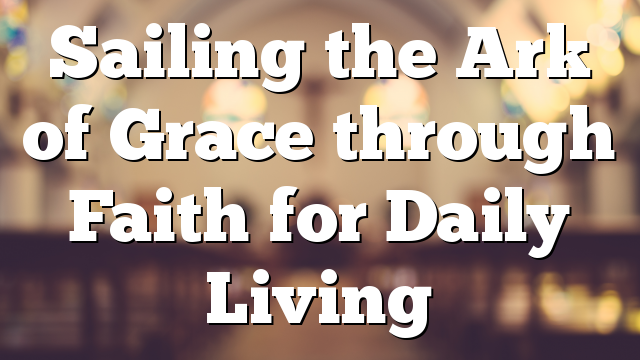 We are already in the ark of the redeemed.
Let us now sail the ark of grace through faith for daily victorious living.

“Are you so foolish? Having begun in the Spirit, are you now being perfected by the flesh?” (Gal. 3:3). We are saved by His grace, received by choosing faith rather than our performance in life. That’s the way we continue to live. Yes, we live right, but we are not alone. We have the Holy Spirit. God’s grace and love motivate us, and by faith we live and walk, trusting in His direction and power for our success.

But, for daily living, we need to tap into His grace by faith ongoing, over and over, in every situation, being reminded, trusting in His love and mercy, being filled with the Spirit, staying close to Him and in His presence.

We can see the difference when we look at the Old Testament saints. Let’s take Noah:

But, of course, while that saved his natural life, because of God’s favor and mercy, his works couldn’t save him spiritually. Well then, what did? “By faith Noah…” Heb. 11:7 begins. That’s the answer! In fact, he “became an heir of the righteousness that comes by faith,” it says. An heir doesn’t work for what he inherits. It is a gift which is bequeathed to him. In a sense, like all the Old Testament saints were saved, it was by faith on credit, so to speak, until Jesus came and ratified it in His blood.

It is still true today. It isn’t our works that please God, it is our faith. But, with a healthy respect for the Lord, caring about what He cares about, we allow that faith to impact our lives, leading to faith-filled works, corresponding actions that show forth our faith. “For we are His workmanship, created in Christ Jesus for good works, which God prepared beforehand, so that we should walk in them” (Eph. 2:10).

We need to believe to receive, even though it is ours

And, do those faith-filled works lead to favor and mercy in this life for those who are already saved. Clearly yes! Just a couple of examples: Lazy people don’t thrive, whereas diligent people who trust the Lord do. Or, moral corruption leads to a downhill spiral, whereas right living gains us favor with those around us. Or, a worldly, selfish focus hardens our heart to people and the things of God, whereas, a spiritual, giving lifestyle opens us up to both God’s ways and a love for others.

Of course, we have a phenomenal advantage over the O.T. saints. We have the Holy Spirit living within, the Spirit of Truth, to lead and guide us, to counsel us, to strengthen us, so that we can be sure to overcome. As we abide in Him and He in us, either we are protected or He can bring us through unharmed.

It is the combination of grace through faith (Eph. 2:8-9) that brings the victory in life. Yes, victory comes because “God is gracious and full of grace;” That’s His provision. But, we “live by faith” (Rom. 1:17, Gal. 2:20, Gal. 3:11). This is how that grace is able to impact our lives and circumstances. He has given us that seed of faith. It is strengthened with exercise. And, it’s not something that we work up. It is simply there, and we choose to live by it. We are already in the ark of the redeemed. Let us now sail the ark of grace through faith for daily victorious living.

Prophetic Word for the Year 2018