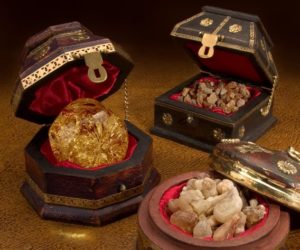 It is recorded that the Magi gave the Christ Child three gifts upon his birth; gold, frankincense and myrrh. We understand the gold today as a physical gold, representing His kingship and the other two as an incense to symbolize his priestly role and oil for his foreseen death. Yet, what if the gold that was given to the Christ child was for another reason and perhaps it was not “gold”, but a golden spice or a golden salt. Of the gifts, one could be ingested, one could be inhaled and one could be absorbed. If we look at all from a medicinal viewpoint, these three gifts may have more symbolic meaning than one perceived.

So who exactly were the “Magi”. We know that they followed the stars and were from the East. The East was a region of the world known, at the time, for its great knowledge of natural remedies. So it is not unimaginable that they could have been natural healers or homeopathic doctors of their times. This could explain the hypothesis that all three gifts have a therapeutic purpose in the life of Christ.

If we view the gold in compound form, it can be used in the treatment of rheumatoid arthritis. Gold is a type of disease-modifying anti-rheumatic medicine (DMARD) that dampens down the underlying disease process. This meaning it treats inflammation and stops the immune system from attacking its own body’s tissue. Gold can also be used to treat other auto-immune conditions. If we think of the gift of gold as a spice, the first one that comes to mind is curcuma which is known as the “golden spice” of the East. It also has the ability to reduce inflammation and provides immune system support along with anti-cancer effects. This golden spice seems to have the ability to kill cancer cells and prevent their regrowth.

When frankincense is inhaled, it is the most effective method of delivery to send a chemical message to the brain. The oils in frankincense have a high level of sesquiterpenes, an agent found in plants that has the ability to go beyond the blood-brain barrier. Sesquiterpenes from frankincense increase oxygen availability in the limbic system of the brain which leads to an increase in secretions of antibodies, endorphins and neurotransmitters. In layman’s terms it has the ability to go straight to the brain without traveling through the bloodstream and brings healing properties to reset and repairs its internal communications. It’s almost as if it can unlearn a disease or degenerative disorder passed down in our DNA.

The amygdale glad of the brain’s limbic system plays a major role in storing and releasing emotional trauma. The only way to stimulate this gland is with fragrance or the sense of smell. This may help us understand how we are able to release emotional trauma with aromatherapy of frankincense.

Myrrh also can arouse the limbic system to release emotional trauma. It also has anti-inflammatory and immune boosting properties among with many other health benefits. Once applied to the body, oil molecules pass through dermis, into the capillaries and directly into the bloodstream.

The substance know as monoterpenes are present in almost all essential oils. They are what enhances the therapeutic values of other components and are the balancing portion of the oil. They inhibit the accumulation of toxins and restore the correct information in the DNA of the cell. Sesquiterpenes are also found in myrrh and delete the bad information in cellular memory or memories that are hypothesized to be stored outside the brain in the body.

This is quite interesting, to say the least, that all three gifts can protect the body from such dramatic trauma. The body of Christ from infancy was being safeguarded against what was to become his destiny of great suffering and pain. The cathartic releasing of emotional trauma provided with the gift of frankincense would lay the foundation for the harrowing experience of death by crucifixion.

All three offerings had anti-inflammatory properties and helped support the immune system by preventing the system from attacking its own body’s tissue. Christ’s earthly body was protected right down to the minuscule cellular level. Even the cellular memory of his body was restored with these gifts. At a molecular level, His Heavenly DNA was being guarded. The gifts purposed to protect the Christ child’s from disorders genetically passed down and to restore the information in the cells of the DNA.

One gift was for the body, one was for the blood and one was for the brain. One gift purposed to go beyond the blood-brain barrier while the other was via the bloodline. The Christ child was both a descendant of a Heavenly father and an early mother. The father’s bloodline was supernatural while the mothers’ was a physical line.

We will never truly understand this side of Heaven all the care that went into protecting the Christ child. Yet since we are descendants of a Perfect Deity, we too have this promise of complete restoration of curses, sickness, disease, imperfections, degenerative disorders, mental impairments, and any physical, mental or spiritual attack of the body, mind and soul. We have been given a choice of living a life of blessing or curse. Just as the gifts of the Christ child had to be accepted, we too much choose to accept this promise. The question of eternal Sonship, eternal Fatherhood of God or eternal generation answered.