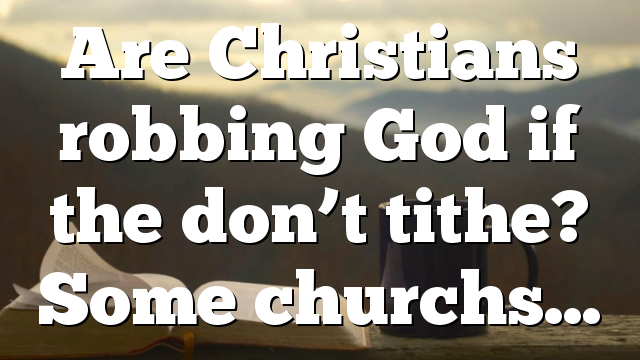 Q: To tithe or not to tithe?

A: Neither & Both. Just Give. Give willingly, give worshipfully, give honestly, give gladly, give generously, and sometimes even give sacrificially. You cannot do more than that, and God requires no less.

Alan N Carla Smith [09/14/2015 9:50 AM]
you might as well keep it, if it’s not willingly, worshipfully and with a cheerful heart. Well said Hart and John Kissinger

Steve Webb [09/15/2015 9:04 PM]
Tithe…yes. It’s not an option. If you don’t give God the first fruits how do you expect to be blessed? Giving is an entirely separate issue.
Keep in mind that Abraham was not under the Mosaic Law, yet he knew to pay tithes. It was a matter of understanding where the fruits come from. If you’re not giving AND tithing, I’d say your faith hasn’t reached your heart or pocketbook.

Charles Page [09/15/2015 9:39 PM]
Babylon requires your tithes/offerings to keep buying bricks for their buildings and admin people. No thank you!!!

Looks like the Iraqi-Kurd-American offensive to retake Mosel is under way and doing well. Needless to say our troops need our prayer support. There…