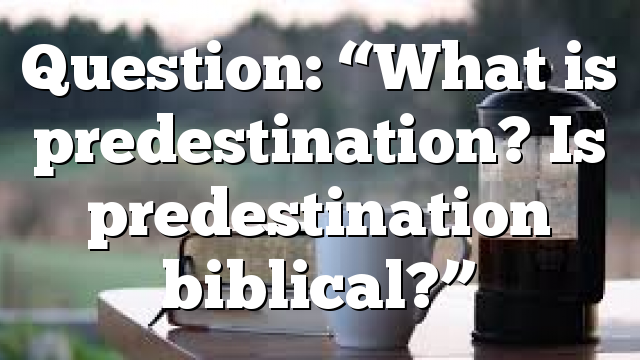 [There remains so much confusion in the Body of Christ concerning God’s foreknowledge and predestination, I am reprinting Andrew Wommack’s commentary on the subject. Learned theologians are all over the place on this subject, but Andrew is one of the more articulate writers with clear Holy Spirit revelation, in my opinion. I consider this posting needful since many believers have been wrongly taught the harmful and unbiblical view that God predestines some for salvation and some for damnation. Andrew’s commentary can be found at http://www.awmi.net/bible. – Emphasis and subtitles mine – Ray E Horton]

“’For whom he did foreknow, he also did predestinate to be conformed to the image of his Son, that he might be the firstborn among many brethren.’

“The word foreknowledge refers to God knowing who would accept His offer of salvation in advance of them actually doing it. The Scriptures teach that we believers were chosen in Christ before the foundation of the world (Eph 1:4). That’s how infinite God’s ability is to know our choices in advance.

There Are Some Things God Does Not Know

“The Scriptures also reveal that there are some things God does not know. Twice in the book of Jeremiah, God said the fact that people would offer their children as sacrifices to demon gods never even came into His mind (Jer. 19:5 and 32:35). There are some things that God Himself said He had never foreseen.

“It is most probable that the Lord has the ability to know everything in advance, but He simply doesn’t choose to exercise that ability in every situation. He told us to be wise concerning that which is good, and simple or innocent concerning that which is evil (Ro 16:19). He also told us to think on things that are true, honest, just, pure, lovely, of good report, and things that have virtue and praise (Php 4:8). That’s the way He desires us to be because that’s the way He is.

“Therefore, when God acted surprised that Adam and Eve had eaten of the forbidden tree, He probably was. As we have already pointed out from Eph 1:4, God chose us in Christ before the foundation of the world.  He knew there would be a transgression and a need for redemption before man was even created. But apparently, He did not utilize His foreknowledge to the extent that He knew every move that man was making.  No reason is given for this, but certainly one reason is that an absolute use of God’s foreknowledge would hinder His relationship with man.

“God sent two angels to Sodom and Gomorrah to see if their actions were really as bad as had been reported to Him (Ge 18:20-19:29). The Lord tested Abraham (Ge 22:1-10). After the test, He said, ‘For now I know that thou fearest God, seeing thou hast not withheld thy son, thine only son from me’ (Ge 22:12). The Lord repented for choosing Saul to be king when He saw the way he turned out (1Sa 15:11). The Scripture contains many other examples besides these.

“God’s ability to know all things in advance is limitless, but by His choice, God does not know every detail. Understanding foreknowledge provides the foundation for understanding predestination, calling (Ro 8:30), and election (1Pe 1:2).

Predestination Is Dependent on Foreknowledge

“This verse provides the key for unlocking the answer to the doctrine of predestination. Predestination is dependent on foreknowledge!

“The word predestinate means to predetermine. Predestinate and its variant predestinated are only used four times in the New Testament (Ro 8:29-30; Eph 1:5, and 11). People have interpreted this doctrine as saying that God predetermines everything in people’s lives, including whether they will be saved or lost. This interpretation is not consistent with other doctrines or examples in Scripture. This belief will destroy people’s motivation to fight evil and do good. If God predetermines everything that happens in people’s lives, then everything that happens to them is God’s will–even sin. That is not true.

“This verse limits God’s predestination to only those whom He foreknew. This means that only those people who God knew would accept His offer of salvation have been predestined. He does not predestine people to be saved or lost. Those whom He foreknew in Christ have been predestined to be conformed to the image of Christ. As we can tell by observation, God doesn’t even force that to happen. With some Christians, this will not occur until they receive their glorified bodies, but it will occur.

“God gave all people free will, and God will not violate that free will except in judgment. Even in judgment, God is only enforcing the choices that people have already made of their own free will. All people have a God-given right to go to hell if they want to.

“Just as in Ro 8:28, God works everything together for good for those who already love Him. And even then He does not take away their free will. Everything that happens to them is not good, and it is not from God. However, God, in His infinite wisdom, can work it together for good. Ro 8:29 is simply continuing to develop the truth that God is for man and has predetermined that those who have come to Him for salvation will be saved to the uttermost.

“Understood correctly, this verse provides great reassurance to believers that God is for them and working with them to bring them to the complete stature of the Lord Jesus Christ (Eph 4:13).

Mercury to Cross Between Sun and Earth this Monday while Earthquake Swarm Detected Below Mount St. Helens Washington Volcano

A swarm of more than 130 earthquakes has been detected beneath Mount St Helens over the last eight weeks, according to the US Geological…