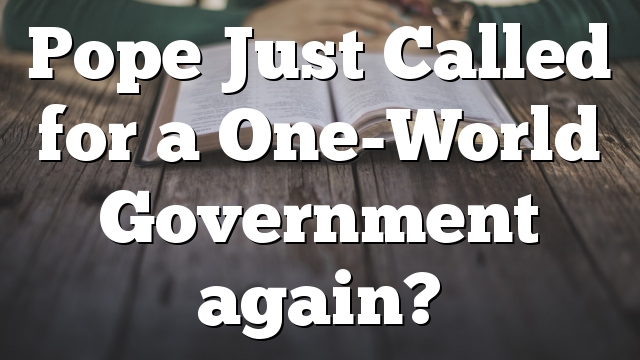 Pope Francis is pushing for steps toward global authority that supersedes the rights of individual countries, all with the goal of pursuing “the common good” on issues like climate change and immigration.

“When a supranational common good is clearly identified, it is necessary to have a special authority legally and concordantly constituted capable of facilitating its implementation. We think of the great contemporary challenges of climate change, new forms of slavery and peace,” he told members of the Pontifical Academy.

They met last week at the Vatican to discuss the topic of: “Nation, State, Nation-State.” While addressing the conference, Francis rebuked the trend of nationalism among individual countries and the many tensions that “come from an excessive demand for sovereignty on the part of states.”

However, the pope defended patriotism as a good thing. But he warned it can become perverted when “it involves the exclusion and hatred of others when it becomes a conflictual nationalism that builds walls, indeed even racism or anti-Semitism,” according to Breitbart.com.

Francis also implied national sovereignty becomes twisted when countries do not have a welcoming attitude toward migrants.

“The church observes with concern the reemergence, in many parts of the world, of currents that are aggressive towards foreigners, especially immigrants, as well as a growing nationalism that neglects the common good,” he told the conference.

This, in turn, “threatens to jeopardize consolidated forms of international cooperation, undermines the aims of international organizations as a space for dialogue and meeting for all countries in a spirit of mutual respect, and hinders the attainment of the sustainable development goals approved unanimously by the United Nations,” the pope said.