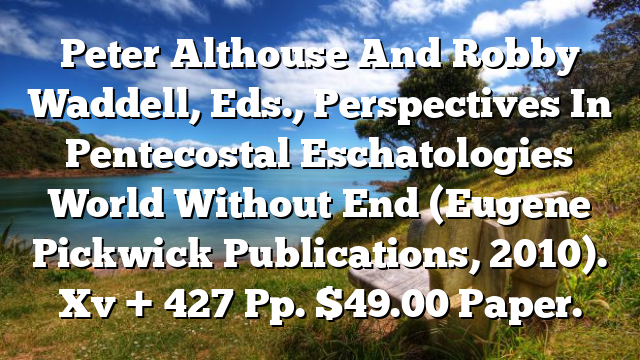 In the introductory essay of Perspectives in Pentecostal Eschatologies: World Without End, Peter Althouse relates the importance of eschatology for the pentecostal imagination, deﬁn- ing it not as a study of the end, nor a mere concern of individual salvation, but rather as the recapitulation of human history which includes both social and cosmic dimensions. How- ever, within the popular pentecostal worldview, many have come to adhere to dispensation- alism’s dogmatic focus on individualistic soteriology and passive withdrawal from society in anticipation of a secret rapture of the righteous and divine judgment on the wicked. In response, this collection of essays approaches pentecostal eschatology from biblical, theo- logical, and contextual perspectives, demonstrating the diversity of opinion — particularly within academia — and exhibiting alternatives to dispensationalism, which better align with the positive, holistic hopes seen during the earliest days of the classical Pentecostal movement.

Part one of this volume consists of ﬁve essays representing a panoramic view of biblical, pentecostal eschatology. Obviously, this small selection is insuﬃcient to provide the full biblical vision of pentecostal eschatology, yet each article oﬀers alternatives to one or more dispensational ideals. Tese include William Raccah’s essay on the Jewish background of Christian eschatology; an article by Blaine Charette arguing that Luke — Acts testiﬁes that Israel’s national goals were realized when it became the central hub for the Holy Spirit’s redemptive activity to all nations; John A. Bertone’s article establishing that many dispen- sational concepts are foreign to Pauline theology including the dispensations themselves, the demarcation between grace and law, the rapture of the church, and cessation of the spiritual gifts; an essay by Waddell purposing ecological responsibility through a biblical interpretation which views the kingdom of God as inaugurated and the eschaton as bring- ing the renewal of the earth; and John Christopher Tomas’ interpretation of Revelation’s Great Whore of Babylon as a socio-political critique and judgment against ungodly world powers.

Part two of this text is comprised of ﬁve essays discussing eschatology in light of the his- tory of classical Pentecostalism and contemporary theological reﬂection. Tus, Larry McQueen explores the eschatology of the Azusa Street Mission, demonstrating that heaven was recognized as a future reality that may be experienced in the present through the Spirit’s outpouring. Next, Murray W. Dempster contends that as opposed to dispensationalism’s withdraw from social involvement, a belief in the triumphant return of Christ creates an eschatological warrant and moral mandate for social engagement. Ten, Matthew K. Tompson, combining Wesley’s full-gospel theology and the Eastern Christian concept of theosis, suggests a connection between soteriology and eschatology, explaining that the pres- ent deiﬁcation of the microcosm (individual) is a precursor to the eschatological deiﬁcation of the macrocosm (world), and Althouse purposes a holistic and cosmic eschatology informed by Jürgen Moltmann, Karl Barth, Miroslav Volf, Amos Yong, and others. Finally, Daniel Castelo recommends pentecostals apply the theological virtue of patience within their eschatology — living in expectancy of the coming of Christ, while at the same time patiently excepting the divine mystery of the coming. Again, each of these contributors

presents an argument against the theology of dispensationalism, often with a direct chal- lenge within the articles themselves.

In part three, the text narrows its broad focus on pentecostal eschatology to three articles representing the voices of the neo-charismatic movement: Jeﬀrey Gros’ promotion of ecu- menical dialogue between pentecostals and Roman Catholics through a discussion of their eschatological positions; David Moore’s examination of the restorationist position of the Shepherding Movement; and Michael McClymond’s argument that the Prosperity Gospel should be viewed in the context of the 1940’s Latter Rain Revival, in which the church is depicted as the dominion of God’s reign and a partial realization of the eschaton. Similarly, part four again contextualizes the scope of the book by considering pentecostal eschatology through particular ethnic and geographic lenses. Nestor Medina considers the dispensational nature of Guatemalan pentecostalism the cause of the church’s withdrawal from social-engagement. However, he notes that a postmillennial shift in eschatological vision is occurring which will change the way Guatemalan pentecostals look at church, society, politics, and God. Sammy Alfaro analyzes the Hispanic Pentecostal funeral service as a liturgy anticipating the coming kingdom of God. J. Ayodeji Adewuya oﬀers the begin- nings of an African pentecostal eschatology by reﬂecting on the worldview and needs of the African people against the dispensational emphases of Western missionaries. Finally, Frank Macchia contributes a pentecostal eschatology inﬂuenced by the nineteenth-century Euro- pean pietists, Johann and Christoph Blumhardt, and their respective emphases of divine healing and social transformation.

Althouse and Waddell have done a commendable job in collecting articles from some of the foremost pentecostal biblical and theological scholars. Moreover, the variety of topics supplies the reader with a superb overview of the complexities of pentecostal eschatology. Tus, in opposition to dispensationalism, which — as noted time and again — has prob- lems aligning with pentecostal theology and modern societal concerns, this collection pro- vides eschatological options and registers contextual concerns which are resolutely pentecostal. Of course, within the space constraints of the essay genre, readers may be left wishing to know more of any given topic. Tankfully, the footnotes to this volume are as valuable as the essays themselves, as they include citations to some of the preeminent Chris- tian scholars, pentecostal or otherwise, past and present. Tus, the footnotes serve as a map for further exploration into the topic.

Only one complaint is left to be made. Since dispensationalism is so heavily criticized, perhaps the editors should have included a pro-dispensational article, even if it was in sup- port of the more moderate form of progressive dispensationalism. Tis would have given a more balanced feel to the argument. Nonetheless, this composition is a must read for any serious scholarly understanding of contemporary pentecostal eschatology.

Revival in America – Ray E Horton “Our country is ready for and in need of revival.” Can you guess who wrote that?  It…