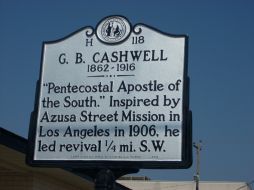 Pentecostal Apostle to the South GB Cashwell and the Dunn, North Carolina Revival started on December 31, 1906

Gaston Barnabas Cashwell known as “The Pentecostal Apostle to the South was born in 1860 and died from a heart-attack in 1916. But exactly 10 years before his passing in glory, his ministry influenced many denominations. About a dozen existing Pentecostal bodies can trace their Pentecostal heritage directly or at least in part to Gaston B. Cashwell.

In November 1906, GB Cashwell traveled to Los Angeles to visit the Pentecostal revival at the Azusa Street mission. In early December, he had an experience that he believed to be the baptism in the Holy Spirit and the evidence of speaking in tongues. They said he spoke in German.

Upon returning to Dunn, North Carolina, on December 31, 1906, Cashwell preached the Pentecostal experience in the local Holiness church. Interest in the Pentecostal experience was so great that he rented a local tobacco warehouse and began a month-long crusade. A revival broke out in North Carolina, especially in the holiness movement. Most of the ministers of the Pentecostal Holiness Church, the Fire-Baptized Holiness Church and the Holiness Free Will Baptist Churches were swept into Pentecostalism by this revival. Over the next six months, he toured the south preaching “Pentecost”. His zeal and influence in spreading Pentecostalism through the south has earned him the title of the Apostle of Pentecost to the South. 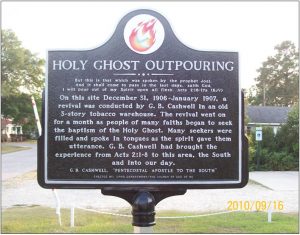 In 1906 as G. B. Cashwell and Dunn NC opened a new era for the South. It was much like the recorded meeting that he had with people of all faiths and colors. The Methodist, Baptist, Presbyterians, Holiness Church and many others gathered to seek for the Baptism of the Holy Ghost and left that meeting as changed men and women for God. Our event was made up of an audience much like his was as we anticipated what God would do. The meeting started off with the guest speaker, Dr. Vinson Synan, author of many books on the holiness and Pentecostal movement in the United States, speaking on the historical significance of this site and the man behind the movement. Then the singers came and so did the wonderful power of God to visit with each of us as the Holy Ghost ministered to each one. As this marker was dedicated in the name of the Father, a white dove was released, in the name of the Son, another white dove was released and then in the name of the Holy Ghost, the third dove was released and they ascended high above and circled until the third dove joined the first two and then they headed home. You would have to be there to appreciate the beauty of this conclusion to the dedication ceremony.

SHOULD the Impeachment Hearings considered ‘Demonic’?

New York Times: Trump knew about whistleblower complaint when he released Ukraine aid PODCAST ‘Presidents are not kings,’ judge declares INTERACTIVE Tracking all the subpoenas and…