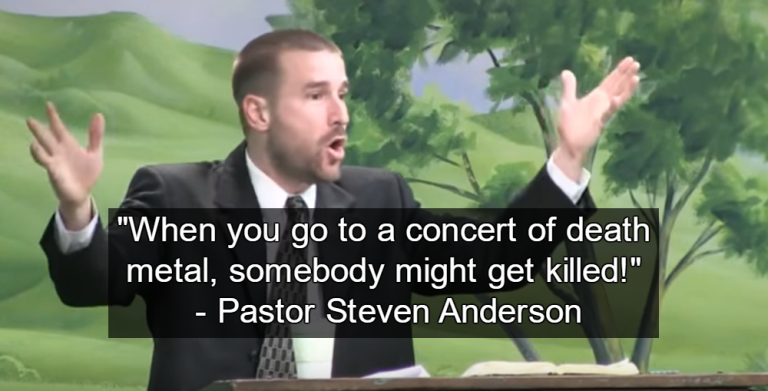 John Kissinger [11/17/2015 10:00 AM]
is this the same guy here? http://www.patheos.com/blogs/progressivesecularhumanist/2015/06/arizona-pastor-calls-for-execution-of-lgbt-citizens/

Corey Forsyth [11/17/2015 10:18 AM]
Yeah this guy is at least 3 fries short of a happy meal… I watched one sermon using the verse about “he that pisseth against the wall” and spun it as a sermon against men peeing sitting down and how modern men are becoming effeminate.

John Kissinger [11/18/2015 11:30 AM]
It’s a good thing many/most Pentecostals are against membership in secret societies like masonic cults

John Kissinger [11/18/2015 11:33 AM]
“The largest Christian church in the world does not allow Masons to partake of communion and declares that participation in Masonry is a sin.” http://ag.org/top/Beliefs/topics/charctr_16_secret_societie.cfm

Glynn Brown [11/18/2015 1:08 PM]
Masonry is not a secret society, all lodges clearly show the times and dates of every meeting. It’s a fraternity for men plain and simple.
The early church was a secret society, it meet in secret in the catacombs,which was only open to those that were initiated (confession of faith and water baptism) and had secret forms of recognition (one person would draw half of a fish in the sand,and the other person would draw the second half)

Glynn Brown [11/18/2015 7:35 PM]
I notice that ‘the largest church’ mentioned is the Roman Catholic church. The article didn’t have the brass to mention it by name. Does this mean they are inline with the Vatican?
And being ‘unequally yoked’ with unbelievers is referring to marriage with unbelievers. The article cannot even perform a proper exegesis of the scriptures.

Corey Forsyth [11/19/2015 2:10 AM]
Not that I believe I would be able to change your opinion at all but your mention of 2 Corinthians 6 being about marriage brings up an interesting question. It doesn’t specifically mention marriage. It talks about partnership. Even though its been used for marriage teachings, I don’t see it having specific implications toward marriage.

When people get married, they used to say ‘let’s get hitched’

The verse has nothing to do with fellowshiping with unbelievers, or else Christ himself would have been guilty.(a friend of tax collectors and sinners)

Corey Forsyth [11/19/2015 6:11 AM]
The level of arrogance in that statement is very telling… My question had little to do with masons and everything to do with posing a question about that verse (which is my understanding of the purpose of this group). As far as masons are concerned, I do not understand their purpose in the first place. I get Shriners but what are the masons outside of a fraternal club for men who feel the need to be in a pseudo secret club?

The outward evidence of salvation

The outward evidence of salvation to all men is a life of righteousness and true holiness. True salvation does not desire to mimic the…