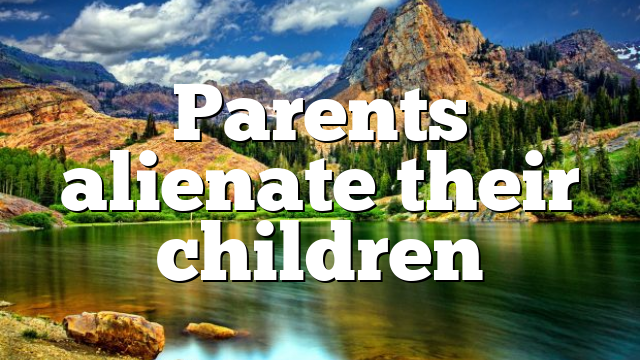 One sure way for a parent to alienate their children is to attempt to use them for their advancement. We regularly see Hollywood parents training their children to be actors with the hope of bringing in millions. And all too often the child grows up resenting their having missed out on childhood. The twins from Full House, the boys from Different Strokes, the Brady Bunch girls, the boy from Home Alone and a whole assortment of children have been forced into this mold. And most have grown up angry. Some years back an ambitious inventor assembled a flying sauce shaped balloon in his backyard with the intent of letting it loose and then calling 911 to report that his son was trapped inside. All the time he had instructed his son to hide in the attic and tell people that he had tried to trick his parents. The father’s hope was that this national acclaim would land him in Hollywood as host of an inventor’s show. So now we see still another of these parents attempting to use their children for profit. Kevin Malarky, who’s son six year old son Alex was in a coma and nearly beheaded in a car accident but miraculously recovered, apparently desirous of the sort of acclaim that Colin Burpo (“Heaven is For Real”) and his family received upon his near death experience, saw in this an opportunity to exploit the incident. From all indications Malarky (at the strong objection of his x-wife) apparently coached his son to report angelic visitations and a trip to Heaven that never happened. Well now Kevin is speaking out; likely at the encouragement of his mother and skeptics like atheist Sam Harris and anti-miracle preacher John MacArthur. In an apparent attempt to get back at his father for whatever reason Kevin now says the whole thing is a lie. Okay I suppose the father is deserving of some criticism. The thing most alarming about all of this though is that skeptics like Harris and MacArthur now have the “I told you so” trophy they have been seeking. Now they can use Malarky as a method of discrediting everyone who has had some sort of miraculous experience. They are all either liars or lunatics. Surely this same explanation applies to Colin Burpo and everyone else making such claims. Many of us know firsthand otherwise but again Harris and MacArthur now have their trophy to show forth. I well remember after the phoniness of Peter Popov, Robert Tilton and W. V. Grant was exposed that every Christian believing in miracles was subject to ridicule and the Church was made to look silly. Ultimately all they brought was reproach upon the Name of Christ. A year or so ago I wrote to John MacArthur asking him to explain his doctrine of cessationism. As you may know, the Apostle Paul says that miracles will not cease until the “Perfect” has come. Generally this is taken to mean the second coming of Christ but MacArthur has convinced his flock that the Perfect came no later than 96 AD and all miracles ceased afterwards. But Paul goes on to say that, while he and others see through a glass darkly, at that time we will see face to face. So the question seemed obvious. “Mr. MacArthur if the miraculous gifts have ceased then we must be seeing face to face while Paul only saw through a dirty window. Wouldn’t that mean that the Bible is obsolete?” One of MacArthur’s aids wrote back challenging me to document miraculous events in this age. I did so. I sent them before and after studies of physicians at Johns Hopkins Medical Center, Los Angeles Medical Center and elsewhere. The response I got totally avoided my questions. Instead they began to make fun of Evangelist Benny Hinn. From what I can gather Mac doesn’t like Benny’s haircut. At this point one of the members of Mac’s own church chimed in; saying “You aren’t answering his question.” From that point on I was blocked from posting on the site and I suspect she was as well. I should further note that MacArthur has had to defend his own mysterious doctrines in other areas as well. His claim that, once you have knelt at the alter to receive Christ, you can be involved in all manner of sin without fear of repercussion (a doctrine known as “eternal security”) has produced some sad results. A man in our area committed suicide when the going got rough as his pastor had assured him that even if he had done so he was assured of going to heaven. Some years back an individual at MacArthur’s own church made a similar decision and Mac found himself in court over this. One radio preacher (which may have been Mac; I really don’t know) recently said that “you could even die in bed with another man’s wife and be assured of going to heaven as it is impossible to lose your salvation.” But score one for Mac and the atheist crowd (which should not find themselves in the same camp) today. The Kevin Malarky story has been proved a fraud. And we will likely hear the “I told you so” responders for years to come. All of this as a method of writing off anyone who has had any sort of miraculous experience. Yep we are all either liars or lunatics.

Will there be night in the millennium?

Will there be night in the millennium? Facebook Comments