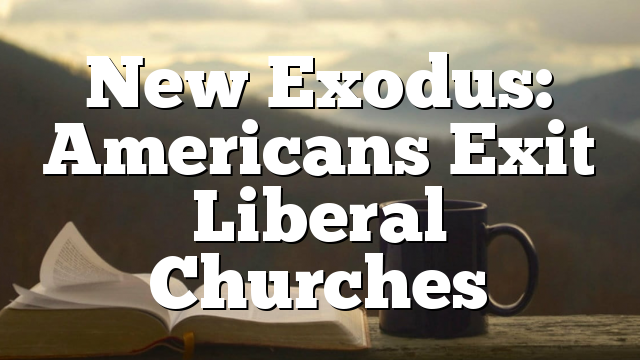 “We have figured out your problem. You’re the only one here who believes in God.” That statement, addressed to a young seminarian, introduces Dave Shiflett’s new book, Exodus: Why Americans are Fleeing Liberal Churches for Conservative Christianity. The book is an important contribution, and Shiflett offers compelling evidence that liberal Christianity is fast imploding upon itself.

Shiflett, an established reporter and author, has written for The Washington Post, The Weekly Standard, National Review, The Wall Street Journal, and Investors’ Business Daily, among other major media. He is also author of Christianity on Trial and is a member of the White House Writers Group.

Shiflett’s instincts as a reporter led him to see a big story behind the membership decline in liberal denominations. At the same time, Shiflett detected the bigger picture–the decline of liberal churches as compared to growth among the conservatives. Like any good reporter, he knew he was onto a big story.

“Americans are vacating progressive pews and flocking to churches that offer more traditional versions of Christianity,” Shiflett asserts. This author is not subtle, and he gets right to the point: “Most people go to church to get something they cannot get elsewhere. This consuming public–people who already believe, or who are attempting to believe, who want their children to believe–go to church to learn about the mysterious Truth on which the Christian religion is built. They want the Good News, not the minister’s political views or intellectual coaching. The latter creates sprawling vacancies in the pews. Indeed, those empty pews can be considered the earthly reward for abandoning heaven, traditionally understood.”

What makes Shiflett’s book unique is the personal narratives he has collected and analyzed.Exodus is not a book of mere statistics and research. To the contrary, Shiflett crossed America, interviewing both conservatives and liberals in order to understand what is happening within American Christianity. Shiflett’s interviews reveal fascinating insights into the underlying realities and the personal dimensions of theological conflict. Exodus is written in a very direct style, with Shiflett providing readers anecdotes and analysis of his personal interaction with those he interviewed.

One of Shiflett’s interviewees was the Reverend Bruce Gray, Rector of St. John’s Episcopal Church in Richmond, Virginia. In an interesting comment, Shiflett recalls that this was the very church where Patrick Henry gave his famous speech in 1775–the speech in which Henry cried: “Give me liberty, or give me death!” As Shiflett notes, “The Episcopal Church, by freeing itself from many of its traditional beliefs, sometimes appears to be well on its way to achieving both.” Revered Gray supports the election of Gene Robinson as Bishop of New Hampshire, and he told Shiflett that the biblical condemnations of homosexuality had been considered by thoughtful people who had decided that the texts do not mean what they appear to mean. He cited his own bishop, who had issued an episcopal letter arguing, “Many people believe any homosexual activity is purely prohibited by Scripture . . . . But other Christians who take Scripture seriously believe that the Biblical writers were not addressing the realities of people with a permanent homosexual orientation living in faithful, monogamous relationships, and that the relevant scriptural support for those relationships is similar to the expectations of faithfulness Scripture places on marriage.” That is patent nonsense, of course, but this is what passes for theological argument among those pushing the homosexual agenda.

Free eBook – A Woman of Love by Dee Brestin ($11 Normally)

Free eBook – A Woman of Love by Dee Brestin ($11 Normally) Learn what it takes to be a A Woman of Love in this eight lesson study. Through the inspiring story of Ruth and Naomi, women will be taught … Continue reading →