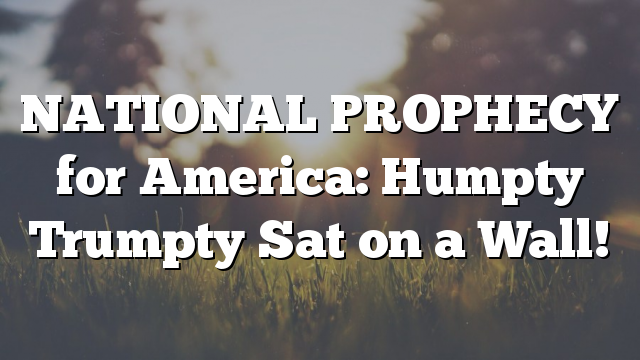 I shared this Word a few days ago on November 28, 2019, where I heard the sound of elephants trumpeting; ‘a sound of distinction’ will be heard: “America: God will Break the Backs of the Donkeys and the Stiff-necked.”

Watch!  As the elephants stampede and the donkeys scatter, and some will say, the elephants have sounded the sound of distinction, for the sound of many trumpets will herald a great victory for a nation that has come under demonic siege!”“

Ha America!  You all going to think I’m crazy but I heard this early hours of the morning:

“Humpty Trumpty sat on a wall.

Humpty Trumpty watched them all fall.

Could not help them back up again.”

While in prayer yesterday I heard The Spirit say something and while it doesn’t make sense to me, I trust it will make sense to some of you.

I heard The Spirit Say, “I gave them a house, so that many could watch it fall.”

I write as a minister from Nigeria.  I so appreciate your obedience in putting out The Prophetic Words, they have been extremely significant in the prayer leads I have had to follow.

Also, I feel to share a significant understanding I have been granted concerning the significant prophetic language used in your dreams.

* The Tea, certainly speaks of The USA.

In many experiences and in following the prayer leads from THE LORD; I was shown the map of USA as being shaped as a Tea Jug that prophetically speaks of the economic calling of The USA as an Economic Nation to the world.

Chris Christie Announces Run, Pledging ‘Truth’ About Nation’s Woes John Kissinger [06/30/2015 5:31 PM]Unlike many of his Republican rivals, plays down the need for…