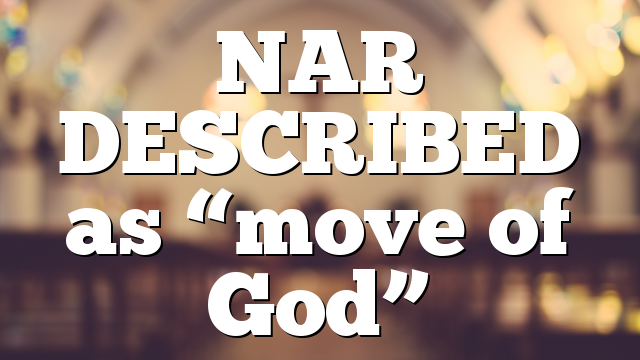 A RECENT PHENOMENON DESCRIBED as a “move of God,”
termed “Apostolic Reformation,” is implementing a plan
for world evangelization through the efforts of Global
Harvest Ministries (GHM) under the direction of C. Peter
Wagner. It has taken a few years for this move to get into high
gear, but it is now impacting a large number of churches.
Apostolic Reformation posits that God is restoring the offices of
apostles and prophets, and that C. Peter Wagner in particular is the
apostle God is using to implement that restoration. Says Wagner:
Back in the 1990s we began hearing the Holy Spirit
speaking about restoring apostles and prophets as the
foundation of the church as God originally designed (see
Eph. 2:20). As I have explained in my book, Apostles and
Prophets: The Foundation of the Church (Regal Books), I
gradually came to the realization that God had given me the
gift of apostle, and that certain spheres of the body of Christ
were recognizing that I had the office of apostle as well.
Consequently, developing apostolic leadership in today’s
church has now become an important function of GHM.1
C. Peter Wagner was at one time mentor as well as disciple
of the late John Wimber, who took over the Vineyard Christian
Fellowship and developed it into an international church
denomination. Under Wimber the Vineyard focused on what he
believed were true signs and wonders. By integrating psychology
with inner healing, the laying on of hands, and a peculiar form
of mysticism which resulted in many bizarre manifestations,
Wimber left the objective reality of God’s Word to turn to
charismania. Wagner championed Wimber’s philosophy.
Wimber also believed in the restoration of the offices of
apostles and prophets and considered himself a latter-day apostle
to all the churches. Now Wagner is promoting himself as the
“Presiding Apostle” over an organization called International
Coalition of Apostles (ICA).2 Wagner lists this and other avenues
through which the Apostolic Reformation is taking shape:
. I am the Presiding
Apostle over this organization with John Kelly, Chuck
Pierce, and Doris [Wagner’s wife] as my leadership team. At
present, 229 apostles are members, and we meet every
December in Dallas.
. e (NAR). I convene this accountability
group of under 25 apostles once a year in Colorado Springs.
. . A select
group of prophets who feel the need to build personal
relationships with peer-level prophets meets together once
a year (sometimes more) in Colorado Springs.
. .
The ACEA provides a creative alternative to accreditation
for schools designed to serve the New Apostolic Reformation.
Currently some 40 schools have ACEA membership.
. .
Many deliverance ministers feel a need for meeting regularly
with peers to keep up with this rapidly-developing field. I
convene this group of under 25 every year in Colorado Springs.
In addition, Wagner does “a series of one-day ICA Leadership
Seminars across the country in order to introduce Christian
leaders to the trends in apostolic leadership.”3
This “move of God,” according to Wagner, requires millions
of dollars in the development of facilities for offices, classrooms
and a conference center where apostles and prophets can be trained.
WHAT IS APOSTOLIC REFORMATION?
During the 1990s, Wagner felt he perceived a new worldwide
reformation taking place among churches. Because of his thirty
plus years as a “professor of church growth,” as well as some
sixteen years as a missionary to Bolivia and a specialist in world
missions, Wagner became aware of church growth in third-world
countries such as Africa, China and Latin America. He saw this
growth as being the result of non-traditional leadership.
Wagner saw a pattern emerge when he noticed that these
disparate movements had a number of things in common:
“That’s when it first became clear to me that we had
something to look into,” recalls Wagner. “When we did,
the most important characteristic that w

The Power of Influence

This is “The Power of Influence.” Influence is powerful, and you likely have more of it than you think. Your friends, family, co-workers, and…