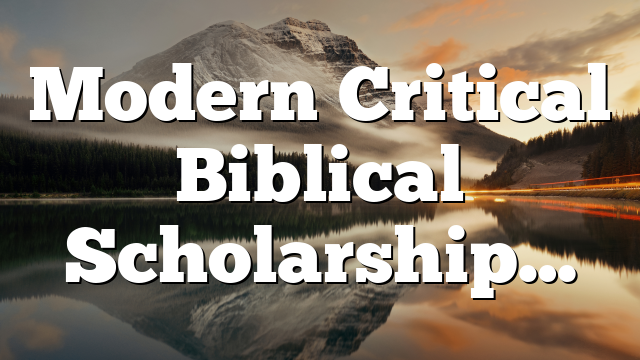 There are very important differences between Modern Critical Biblical Scholarship and Christian Apologetics.

Keeping in mind that apologetics is for defending something that one has already come to believe, and people giving a defense will have certain assumptions, biases and preconceived points of view, but this, I believe, is problematic; allow me to explain.

“The main factors with which criticism has had to contend have included the following:

“General ideas or principles concerning the Bible, such as the conviction that, being the word of God, it must necessarily be perfect and thus inerrant in all its parts (see Inspiration and Inerrancy). As against these theoretical convictions, criticism works with the factual realities of the Bible.

“Harmonizations, that universalize ideas and meaning throughout the Bible, obscuring differences between one part and another. Criticism notices these differences, such as that between documents affirming a virgin birth. (Matthew, less clearly Luke) and others that appear not to do so (Mark, Paul, John).

“Midrash and allegorical interpretations that decontextualize the words of scripture, ascribing to them senses that may be found elsewhere but do not fit this context. Criticism takes the actual context to be decisive.

“Failure to perceive the literary form of the texts, and, in particular, failure to give weight to the silences of scripture, the absences of elements that are commonly read in; for example, the absence from the Hebrew Bible of *Adam’s disobedience as an explanation for *evil, the absence of any birth narrative in Mark, the absence from other Gospels of the clause “except for unchastity” (Matt. 19:9; cf. 5:32; see Divorce).

“Anachronistic reading into the text of meanings, ideas, and situations of a later age; for example, to understand *bishop in the New Testament as if this were identical with medieval episcopacy, or “scripture” in Timothy 3:16 as if it meant exactly the same set of books that are canonical in modern Protestantism (see Canon). Criticism insists on starting with the words in the meanings that they had in biblical times.

“Rationalistic apologetic arguments supposed to overcome discrepancies; for example, the idea that, since the ejection of merchants from the temple by Jesus is placed early in the ministry by John, late by the other Gospels, the event happened several times. Criticism, on the other hand, suggests that the differential placing of the story was for reasons of theological meaning within the narrative.

“Authorship Classical biblical criticism has been much interested in matters of authorship. The *Pentateuch was not written by *Moses himself; the book of *Isaiah contains materials from a time long after that prophet lived; the Gospels were not necessarily written by the disciples whose names they bear. This realization at once changes our picture of the sort of book the Bible is: it is not a once-and-for-all, divinely dictated report but a product of tradition developed over some time with communities of faith. Relations between documents like the *synoptic Gospels are literary relations, involving revision, change of emphasis, selection and theological difference. The feature of pseudepigraphy must be recognized as a fact; that is, that books may be written in the name of , and attributed to, some great person of the past who presides over the genre. Thus, almost all Israelite *law, of whatever time, was attached to the name of Moses, as were *wisdom writings to that of *Solomon; some letters written in the name of *Paul or *Peter may have been written by followers, perhaps using some material from the apostle himself, rather than by him directly.”

I know this is obvious, but my point is only to suggest that the differences in starting points will bring about different conclusions. But is there an objective starting point, that would lead to a more objective conclusion?

Modern critical biblical scholarship is an investigatory process. And unlike apologetics, should be done without bias, prejudice, or preconceptions.

This is a continuation from the The Oxford Companion to the Bible, page 319, the sections on Style and Sources.

“Style has been an important criterion from the beginning. Already in the ancient church it was obvious that 2 Peter was not in a style that Peter used, that the letter to the Hebrews differed in style from Paul, and that the book of Revelation differed vastly in style from the gospel and letters of John; and this observation was already used in early arguments about the canonicity of such books. These ancient observations formed a basis for similar discussions later, especially in Renaissance and Reformation (see article on Christian Interpretation from the Middle Ages to the Reformation, above), when the appreciation of ancient styles had been greatly quickened.

“Sources. That books had been formed by the combination of earlier sources was an obvious corollary of these ideas. Chronicles used Samuel-Kings, revising sometimes slightly, sometimes drastically, and adding material of its own. Mark is most commonly believed to have been used and rewritten by Matthew and Luke. And the sources used could be works that had long disappeared. The books of Kings mention other historical sources known to them. Material common to Matthew and Luke, but absent from Mark, could go back to a source now lost. Within the Pentateuch the different strata, marked by very different language, style, and ideas, could be explained if different sources from different times had been gradually combined. The detection of different sources within a book may thus explain discrepancies and divergent theological viewpoints.”

“Cosmology and Miracle. The rise of biblical criticism ran parallel with changing ideas about the world we live in. New scientific knowledge made it seem impossible that the world could have originated as recently as the date (5000-3600 BCE) implied by the Bible’s own chronology, and the vast majority accepted this: the world was not exactly as Genesis had made it seem see Science and the Bible). Similarly, it was debated just how exactly factual biblical depictions of miraculous events were. Critics noted the literary aspect: scripture is quite uneven in the degree to which it brings in miracle stories, and it may describe the same event in ways that are more sheerly miraculous or less so. This suggests that the element of miracle is again in part a matter of style. Biblical criticism is not in principle skeptical about miracles; but it takes it as clear that not all miracle stories are to be taken literally just because they are in the Bible. On the whole, critical scholarship leaves the question aside; for, in its developed form, it concentrates mainly on the meaning or function that the miracle story had within the work of the writer. For this purpose, it finds it unnecessary either to defend or to deny the reality of miracles; the exegetical process works in the same way in either case.”

As one instructor pointed out to me, “one might not have a problem with the idea of the existence of miracles and still run into problems with the Bible being the ‘word of God’.”

So what does Modern Critical Biblical Scholarship say?

It seems that what scholars learn about the Bible is that before writing was invented the ancient Near Eastern peoples preserved their wisdom, religion, and history orally. The Hebrews were no exception to this. They passed their history and religion from generation to generation through oral tradition. it was not until the tenth century BCE (1,000 years BCE), when they acquired their writing from the Phoenicians that they began to write down their traditions in a collection of books, (the Hebrew Bible) which we call the Old Testament. (Yahweh and the Gods of Canaan, p. 111. Also Introduction to Biblical Hebrew, p. xxii.)

The Hebrews fused some of their traditions in a single book. The two creation stories are an example.

Biblical Archaeology tends to support many of the claims of Modern Biblical Critical Scholarship as well.

Archaeological evidence show that Joshua did not destroy Ai, as is claimed in the eighth chapter of Joshua. Archaeologists have determined from the excavations of Ai that the city flourished between about 3300 and 2400 BCE. At about 2400 BCE it was entirely demolished and never inhabited again, except by a few Hebrews at about 1000 BCE (which is after the time of Joshua). The city had been destroyed and remained in ruins for about 1,000 years before Joshua. ([i]Biblical Archaeology[/i], 1957, p. 80 and B. A. 1962 pp. 66-67. This fact is concurred by the Jewish historian Abraham Malamat: “The excavations of the site of Ai indicate that prior to the invasion of the Jews, it had been lain barren for more than a thousand years.” [i]History of the Jewish People[/i], p. 52).

It seems to me that Christian Apologetics has more to defend itself from Modern Biblical scholarship then from people who simply do not believe in the Bible. And it also seems that many Biblical scholars were themselves once Christian apologists prior to investigating and discovering the evidence.

Now, as I have mentioned before:

“Now even though we know that most of the books of the Bible were written anonymously; that we do not have any of the original documents of any of the books of the Bible; that it was written in ancient dead languages and translation is rather hard and conflictual; even though none of the manuscripts we have are identical; and that the Bible’s development (how the books of the Bible were brought together) would tend to undermine its reliability; and that in early church history anything critical of Christianity was sought out and destroyed (and that the church was not always honest), people still choose to believe it is the “Word of God.”