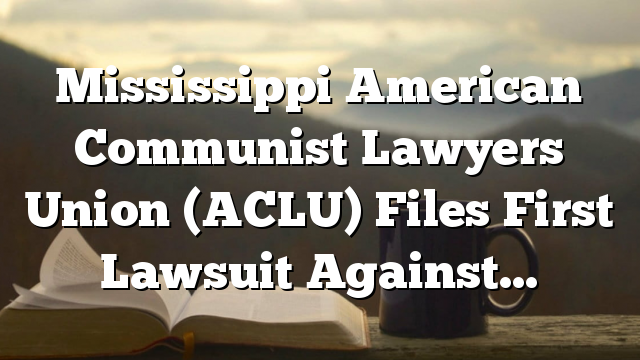 The MS ACLU and a homosexual couple are suing the state of Mississippi over a law to allow workers to cite their own religious objections to same-sex marriage as a reason to deny people services.

#HouseBill1523 , [http://bit.ly/1V85XJm] passed by the Republican-majority Legislature and signed by GOP Gov. Phil Bryant, is set to become law July 1.

Mississippi’s law is among similar measures being passed around the country in response to last summer’s Supreme Court ruling that effectively legalized same-sex marriage nationwide.

Supporters say the Mississippi law will protect people’s religious belief that marriage should only be between a man and a woman. Opponents say it violates the equal-protection guarantee of the Constitution.

“The ACLU continues its mission of trying to use the federal court system to push its liberal agenda,” Bryant said. “Instead of cherry-picking causes popular with the radical left, the ACLU should allocate its resources defending all civil liberties.”

The men suing the state, Nykolas Alford and Stephen Thomas, are both 26. They live in the eastern Mississippi city of Meridian and have been engaged since 2014. They said they hope to marry in Mississippi.

John Hagee: The Power of The Word

Watch as Pastor John Hagee shares a special message on the power of the Word of God in the Bible in your life.