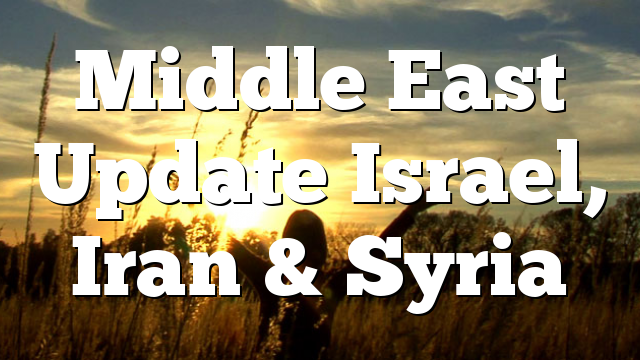 This keeps escalating as Israel just declared that they are now in “Open confrontation” with Iran; a nice way of saying “we are at war.”

“We always knew that this was coming.
The exchange of missiles between the IDF and Iranian forces based in Syria on Sunday followed by threats to attack israel’s airport in Tel Aviv, represented a major escalation of a conflict that has been simmering for months.

If Ben Gurion gets hit, we will immediately see fireworks in the Middle East like we haven’t seen in decades.

Netanyahu pledged to continue to attack Iranian positions in Syria. Israel’s Minister of Intelligence, later told Galatz that the Jewish state was now in “open confrontation” with Iran.

And Iran clearly has no plans of going anywhere. Brig. Gen. Mohammad Reza Naqdi (Iran) stated in a December 28 interview with Al-Nujaba that Iran will not back down” from the goal of “wiping out” the Jewish state.” (Source: prophecy News Watch).

The statement above from the Iranian General clearly fulfills what is said in Psalm 83.

What makes this a grave threat is that Russia is already clearly aligned with Iran in fulfillment of Ezekiel 38, and President Trump has pledged to do whatever it takes to defend the nation of Israel.

So we can surmise from all this that once Ezekiel 38 breaks out, it will be a World war involving the USA, Russia, Turkey, and others.
But America is NOT the one that ends up stopping the invasion forces! So one must ask what happens to the USA, since according to Ezekiel 39 it is God Himself that has to intervene like the Eagles of a Wing that He identified with in Exodus 19:4.

This will probably not deescalate until a major war breaks out. I believe that Psalm 83 was already fulfilled in the 1948, 1967 and 1973 Israeli wars, whereby Israel’s neighbors invaded her with the intent of erasing her from the map. So we may be closer to Ezekiel 38 than most think or hope.

It is time to Seek the Lord, be Ready, and stay informed of these end time events as they unfold at…
https://www.facebook.com/groups/ProphecyAlerts/

From Assemblies of God Restore Our Young Earth Position… Losing Biblical Authority: ‘I’m a Christian, But The Bible’s All Stories … ’ Indeed, society…